Spent yesterday morning at the vet expecting Venus to have surgery to remove as lipoma, or fatty lump. The surgeon felt the lump and said he was absolutely sure it was not a lipoma but thought it was an allergic reaction to something, maybe a shot?  But since her last shots were in October he said probably not that, but a reaction to something.  He suggested heat compresses and if it's not gone by next October when she's due for her yearly checkup, he will remove it and investigate further.  So we'll watch, wait and see what happens to the lump.

He also told us we should be brushing her teeth so we bought a three-sided doggie toothbrush that came with vanilla flavored toothpaste.  It took both of us to keep her mouth open while I attempted to brush her teeth.  She was more interested in licking off the toothpaste than anything else.  Another first in my life!  This girl that never wanted a dog is now scraping off plaque inside a dogs mouth.  The day before we bathed her and I carefully used the blow dryer on her brushing her hair dry.  Soon after she ran into the grass and rolled around to re-scent herself so she'd smell like a dog again.  The vet did tell us not to over do it on the bathing and said that a dog needs to smell like a dog.  Perhaps he made this statement after seeing a lady in the waiting room holding a dog dressed in a shirt and tutu.  The other dogs kept laughing at her while Venus just rolled her eyes.

The good news is that she didn't try to eat or attack any other dogs while at the vet, but later was another story.  Sometimes she's a bully around other dogs, even though her back legs shake in fear.  Clyde said the dog was nice until she started hanging around me, now she's trying to bully others like I do.  But since he's a man we'll consider the source and just ignore that comment!

Then another day spent painting at the new house while Clyde scraped off some more wallpaper border and patched some cracks in the walls.  Venus chose to stay outside and amused herself chasing geckos around the property again.  The house is so quiet and peaceful and already feels like home. 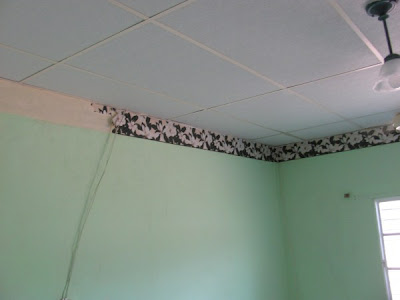 HalfWay thru scraping the
wallpaper border in this room! 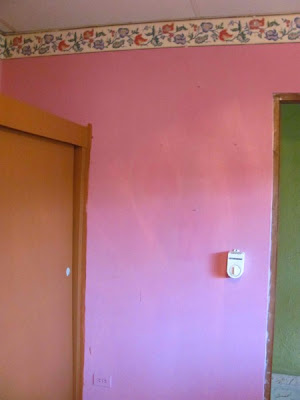 Have been trying to talk Terry into
leaving the walls the same color
Back at the rental house we dropped off the dog and headed to our favorite "parrillada" or barbecue place for a $3.00 basket of pork and "arepa."  Arepas are thick corn tortillas that are sliced in half and filled with white cheese, then grilled for more flavor.  It's my understanding that they originated from Columbian cuisine but we're glad they made it to Panamá.  On our first trip to Panamá we noticed these thick corn tortillas in the grocery stores and thought they looked disguesting.  How could people eat these blocks of cornmeal?  But grilled with cheese they really are tasty, although probably not too healthy.

Back at the casa we turned in early since our internet and cable were down and we were both tired from working on the house all day.  Why is it that on those home improvement shows on HGTV they can finish off an entire house project in under an hour?  But as we know nothing in Panamá moves fast including us, so we'll just take our time and get things done the way we want, one room at a time, one project at a time.......along the gringo trail.
at March 21, 2012