Piecing The Kitchen Back Together.....

Day two of the kitchen project was spent putting the kitchen cabinets into place one at a time then Clyde had to level each one, before screwing them into the cement wall behind them.  This tedious task took up most of the day, but eventually we had time to sit the granite into place along with the dishwasher.  In case you're wondering why half of the counter is higher than the other, it's because I wanted a dishwasher.  On the bottom of the original cement cabinets is a cement base that's about four inches high.  Clyde was able to adjust the cabinet size according to this base but dishwasher's come as a standard size.  By placing the dishwasher on top of the cement base it would raise it about six inches, thus raising the counter top too.  But in the end the split counter top looks good and just gives our kitchen that unique one-of-a-kind look.  Since Clyde is 6'1", he likes the idea of a raised counter top, although it may be too tall for me to use as a work space since I'm only 5'3".

On Friday, day three he had planned to hook up the water lines so we'd have a kitchen sink to use again, and then hook up the dishwasher too. While attempting to connect the water pipes one of the pipes broke and he couldn't find the other end.  Off to the hardware store he went to explain his dilemma in Spanish of course, but no one could help.  Eventually he found one man who spoke English and explained that he needed to chip away at the cement until he found the male and female ends to connect to.  After chipping away for what seemed like hours, he decided to try drilling into the cement which went faster.  Eventually he found what he was searching for, and was able to connect the water lines. 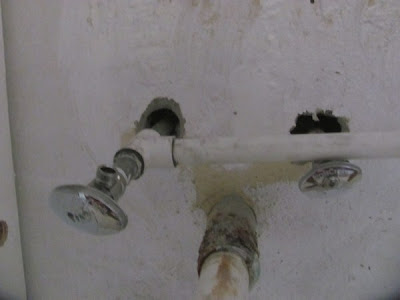 His next dilemma was to find what he needed to hook up the dishwasher, a kitchen appliance that's not too common here in Panama.  Clyde explained to me that in the states dishwashers are usually hooked up to garbage disposals, and that may be the easier way to go, if we could find a disposal.  I did remember seeing one here and went with him to the store to find a disposal.  The additional of a disposal meant that he had to wire the electric and put in a switch to operate the thing too. 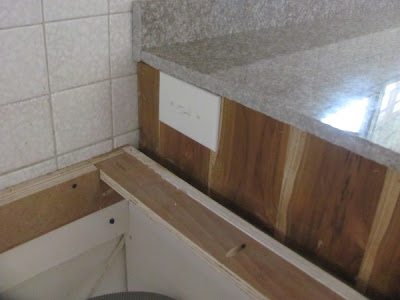 I put a switch in the wood
a lot easier than trying to put it in the cement!
﻿

Although Clyde's day began with much stress over the water pipes, it ended with success as he finished hooking up the lines and dishwasher.  Today his plan is to install the sink and hook up the water lines to it so we have a functioning kitchen sink once again. Then he needs to attach the granite before we can seal it. 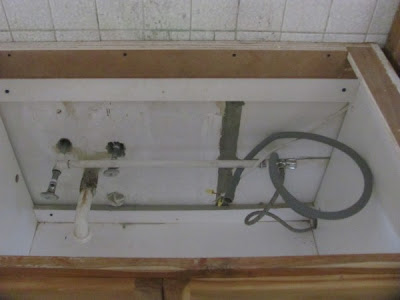 It looks like hell
but it's all ready to go!
﻿

Before the stove goes back into place we're thinking of replacing it with a newer model.  When we first moved here since we were living in a rental house with a small kitchen, we bought a small stove-oven combo.  It has only one oven rack, is so narrow that only certain size pans fit into it and doesn't have a broiler.  For that extremely rare occasion when I actually bake something, it would be nice to have two oven racks to make twice as much.  But the old stove-oven combo will go outside under our bohio and take it's place next to the barbecue grill.  This way we won't have to heat up the house when we turn on the oven because we can use the one in our outdoor kitchen.  Outdoor kitchens are quite common here in this land of eternal summertime, where it's always.....hot, hot, hot.

My new kitchen is looking absolutely wonderful and I'm so proud of my hard working husband for his handiwork.  This whole project has been overwhelming for Clyde and presented many challenges along the way. Hopefully the worst is behind him now and the rest will just fall into place, as this old house turns into our new casa....along the gringo trail.