A Stop At One Happy Island On The Caribbean.....

With Clyde's toe surgery behind us and a day at sea to relax, he felt able bodied enough to book a shore excursion into Aruba.  Since he couldn't get his foot wet we picked the only excursion that didn't include snorkeling, although that's really what he wanted to be doing.  With a group of 25 others from our ship we boarded a bus for a tour around the island.  A couple from Australia on the bus spoke no Spanish and asked the driver to do the tour in both languages which he gladly did making it easier for us too.  Our bus driver Ryan was comical, informative and full of a zest for life and love for the island.  He kept telling us "there are 25 people in this group but as soon as I have 20, I can leave."  A nice way of saying "be back on time or I'm leaving without you," and believe it or not, this did happen to us on another excursion.

Aruba is a tiny island of the Lesser Antilles that sits in the Caribbean Sea just 17 miles north of Venezuela.  Unlike other islands of the Caribbean, Aruba is lined with forests of cactus and devoid of any trees, flowers, grass or other landscaping.  Although the areas around the port are kept landscaped with palm trees, shrubs and flowers for tourists, the rest of the 20-mile island is nothing more than sand and cactus.  Aruba lies below the hurricane zone although our guide told us that hurricanes have come close, but stay in the ocean.

﻿
Our first stop on the bus route was the Capital city of Oranjestad where Ryan pointed out several points of interest. The colorful little town showcases Dutch looking buildings full of architectural charm that made me feel like singing "umm pa pa."   Our first stop was the Ayo and Casibari Rock Formations where we trudged up rocky steps in the hot, arid sun. Next we moved on to Natural Bridge, or what's left of the limestone bridge formation that used to be Aruba's most popular tourist attraction until it collapsed in 2005.  The smaller baby bridge still remains although it is showing signs of cracking and probably won't be there forever either.  Then a stop at Alto Vista Chapel near the town of Noord.  This tiny Catholic church was built in 1952 and sometimes is referred to as the "pilgrim's church" since every year on Good Friday the locals make the trek to the chapel from Oranjestad.

According to Ryan island living comes at a high price since everything has to be shipped in from elsewhere.  With no other choice the island established a desalinization plant that produces some of the best drinking water in the world.  But operation costs are high and water for the average home runs around $250 a month.  Electricity also runs on hydro power from the water and a normal electric bill for an island resident using air conditioning costs well over $300 a month.  Yet islanders only average a monthly salary of around $900 so most seek out second jobs to supplement their income.  70% of island residents work in the tourist industry and there was no need to exchange dollars for florins since they were all too willing to take our money.

Another stop brought us to California Lighthouse that sits on the northwestern tip of the island.  Named after the S.S. California that sunk nearby before the lighthouse was built in 1910, it's become one of Aruba's trademarks and offers a picture perfect view of the island.  Nearby sat a snow cone vendor and while waiting for our "raspao" a brief shower blanketed the dry landscape which is a rare event for this desert climate.

A drive by the famous Eagle Beach gave us a quick glimpse of the crystal clear waters of the Caribbean, but this tour wasn't scheduled to make a stop there.  Funny to think that this sandy, dry island used to be under the sea until a volcano erupted bringing it to the surface millions of years ago. 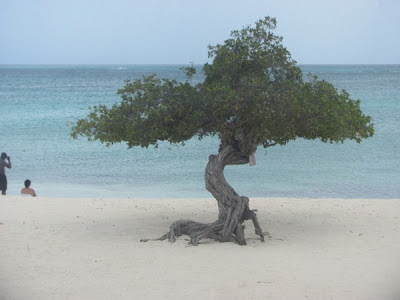 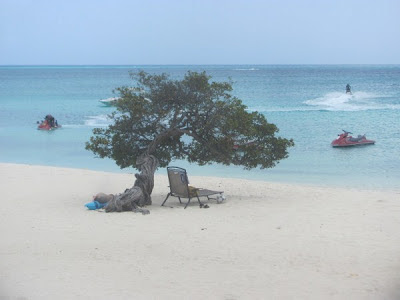 The trees always point to the southwest
due to the trade winds that blow across the island from the north east. 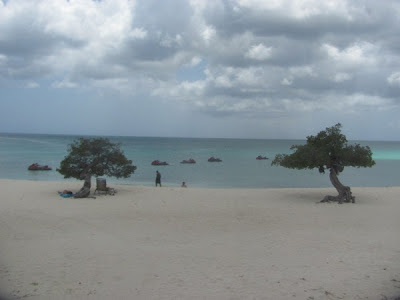 The education system in Aruba is quite advanced and fully paid for by the local government.  Children are taught the native language called Papiamento, a creole language which gets it's roots from Portuguese.  Students are also taught Dutch, English, Spanish and French making us guess how to address vendors while we were out shopping.  The common Papiamento phrase "Bon Bini" simply means "welcome" and is proudly displayed everywhere, although the official slogan of Aruba is "One Happy Island."

Our tour ended up back near the port where we had plenty of time left for shopping.  First back onto the ship for some lunch then we walked back into Oranjestad to buy some keepsakes of our first port of call on Pullmantur's Monarch.

Back on board we enjoyed a late dinner with the new friends we'd made.  An American couple Mary and Riley, spends part of the year in Boquette , Panama and the rest back in the states.  Also seated with us was Linda and Cassandra, a mother and daughter from Utah vacationing together. Among the only other English speakers on board that we met were two young Canadian couples looking for some warm temperatures.  Several of the Dutch passengers that we met who boarded in Aruba or Curacao spoke English but no Spanish, as it's not taught to them as children.

A delightful day spent enjoying "One Happy Island" known to the world as Aruba.  After dinner we enjoyed some tropical drinks while watching scantily clad entertainers jump around on stage in the Broadway Showroom.  A good nights sleep was a must before heading to new heights on the next shore excursion that would take us high above sea level in Caracas, Venezuela as we go port hopping....along the gringo trail.