We all know the famous slogan, "M&M's melt in your mouth, not in your hands," but Mr. Mars should test out his famous theory here in Panama.  Baking is always a challenge here and once again I thought I'd stress myself out by baking something chocolate.  To avoid the hassles of icing which begins to melt as soon as it's made or taken out of the fridge, I tinted the sugar cookie dough orange. Rolling out the dough came with it's own set of challenges but then I thought it would be cute to add M&M's for eyes prior to baking the cookies.  In the time it took me to add two eyes to twelve large cookies on two cookie sheets, the candies began to melt in my hands. Since I poured the candies into a little bowl to make it easier to pick out the colors I wanted, I immediately put the bowl back into the fridge in between using them.

My next horrible venture was to dip chocolate sandwich cookies into melted chocolate to coat them, then top each one with an unwrapped candy kiss so they'd resemble a witch hat.  Since chocolate melts instantly here I'd have to put them into the freezer to harden as soon as possible. In the process of moving things around in the freezer to fit the cookie sheet inside, I managed to knock over the bowl of M&M's that was in there chillin'.  The bowl went crashing down on to the tile floor but didn't break since it was Corelle, but the candy scattered everywhere breaking into millions of pieces.  I couldn't move without stepping on broken candies that immediately began to melt into a rainbow of colors.  The tan tiled floor and rug runners became painted with a rainbow of sugar-coated colors.  I got down on my hands and knees to clean up the mess when suddenly I noticed a colony on ants attacking the chocolate.  I had no idea where the ants suddenly came from since I hadn't seen any around in a long time, and I do look for them always.

Now totally frustrated and upset I didn't know how or where to begin cleaning up the mess.  Clyde came in from outside to hear me swearing out loud and asked for help.  The rugs went outside for cleaning, the bulk of candy pieces were picked up first by hand, then swept, before the floor could be washed.  The refrigerator had to be pulled out from the wall since some had rolled underneath, and the dipped cookies had to be put inside the freezer to harden, which is how this whole mess began.

Just for the hell of it I did some research on the famous little, colorful, hard shelled candies to see if they are indeed not supposed to melt and here's what I found.  The hard outer shell of the candies are not water soluble and therefore won't melt in your hand. When the candies are placed in water after a short time you'll see the colored dyes dissolve and mix in with the water.  But the transparent coating and white "M" are not water soluble.  After about 10 to 20 minutes if you keep watching the transparent shell and letter will float in the water but still not break down. So that makes me wonder just how or if they break down in our bodies?  Perhaps that's one of those things that we really don't want to know and another good reason to not eat them. 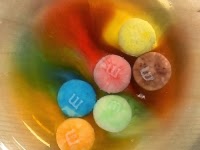 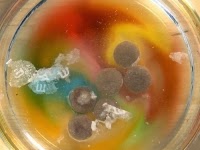 But I'm happy that I got the baking out of the way since today's adventure involves turning a bright pink curtain and some old fabric from my belly dancing days into a Halloween costume for a party tonight.  I've decided to conjure up an old costume idea that I've used in the past.  Years back I picked up some used belly dancing costumes at a yard sale and one included pink harem pants and a decorated bra top to match.  It worked well as an "I Dream Of Jeannie" costume for Halloween but we sold all of our costumes before making the move here.  After all Panamanians don't celebrate Halloween so we didn't need them.  Within one month of moving here two years ago we were frantically out shopping for Halloween costumes because the expats DO celebrate Halloween here.  If you remember this old broad even won a prize last year for "sexiest female" at a local restaurant while dressed as a sexy pirate. So today my wonderful "seamster" Clyde will be making me a costume because he sews better than I do, and I really don't enjoy doing it.  Besides, it'll let him live his fantasies for one evening as I cross my arms and say, "your wish is my command master,".......along the gringo trail. 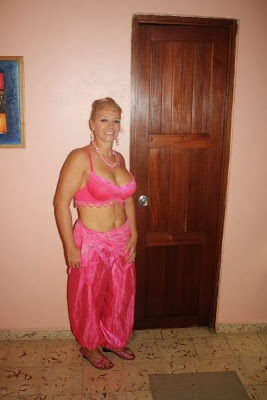 We bought a bright pink curtain, a valance with dangly beads
and a $3.00 bra to make the costume 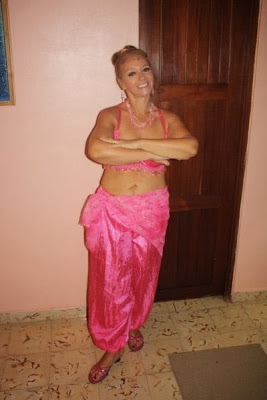 I look fat here since the pants are so baggy, but I wanted
them that way 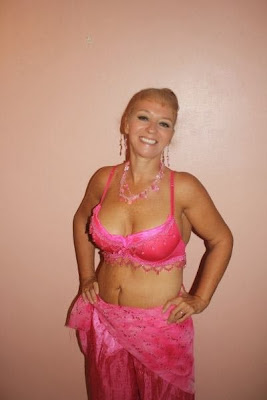 I wore a decorated headpiece that I made but you can't see here,
and my hair is up in a pony tail like Jeannie's
﻿
at October 30, 2013