With the arrival of new friends Allison and Ray from Virginia to Panama it was time for a road trip to get us out of our daily routine.  And when I found an "oferta simple," similar to a "groupon" or coupon that was too reasonable to pass up, a destination was decided upon. For just $45 per couple we booked a trip to the San Blas Islands, home to the Kuna Indians. The archipelago of San Blas consists of 378 islands and cays but only 49 are occupied by the Kuna. Located on the Caribbean coast of Panama we had to first get permission to enter their "comarca" or reservation before proceeding to the port of Carti to meet our boat. 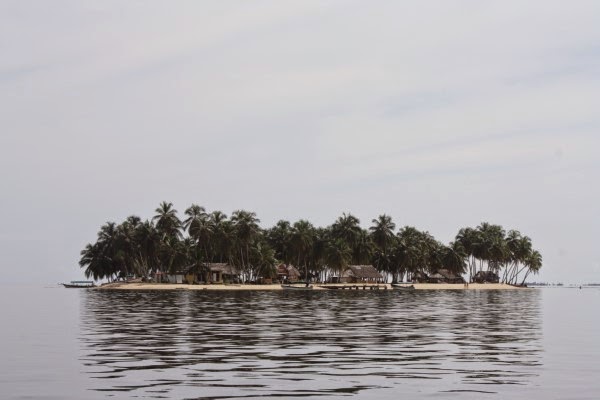 
The port of Carti is about a 2 hour drive from Panama City which makes it at least a 4 hour drive from our house. So our plan was to leave the day before and find a cheap hotel on the east end of the city for the night.  We decided on Express Inn Pty Aeropuerto, a backpacker type of hotel nearby the airport.  Clyde called for a price and was told $50 and with our pensionado discount it would cost us only $25, so we reserved two rooms.  Upon arrival to the hotel Clyde and Ray were told that price was for one person and it would be an additional $10 for the wives, so we ended up paying $35 plus tax. The first room they showed us had the toilet seat sitting on the floor so we asked for another.  The four of us laughed at the décor of the tiny room with a bathroom the size of an airplane bathroom and a shower even smaller.  But it was just for ONE night and just for sleeping, so we sucked it up and paid for the rooms.  The price of the room even included breakfast, although we'd be leaving too early to take part.  But a sign on the wall did spell out in English and Spanish the choice of the free breakfast:  Bread......sliced or square with butter and jelly and free coffee too.  It didn't mention toast just bread....plain and simple and we regretted having to miss such a hearty, unhealthy breakfast!
We headed out for dinner and made our way back to the rooms early enough to chill out and get to bed early. After all we'd have to wake up at 4:30 to leave the hotel by 5:30 for our adventure to Kuna territory.  But as it turned out the hotel staff talked loudly in the hallway all night long keeping us from getting more than a few hours sleep. 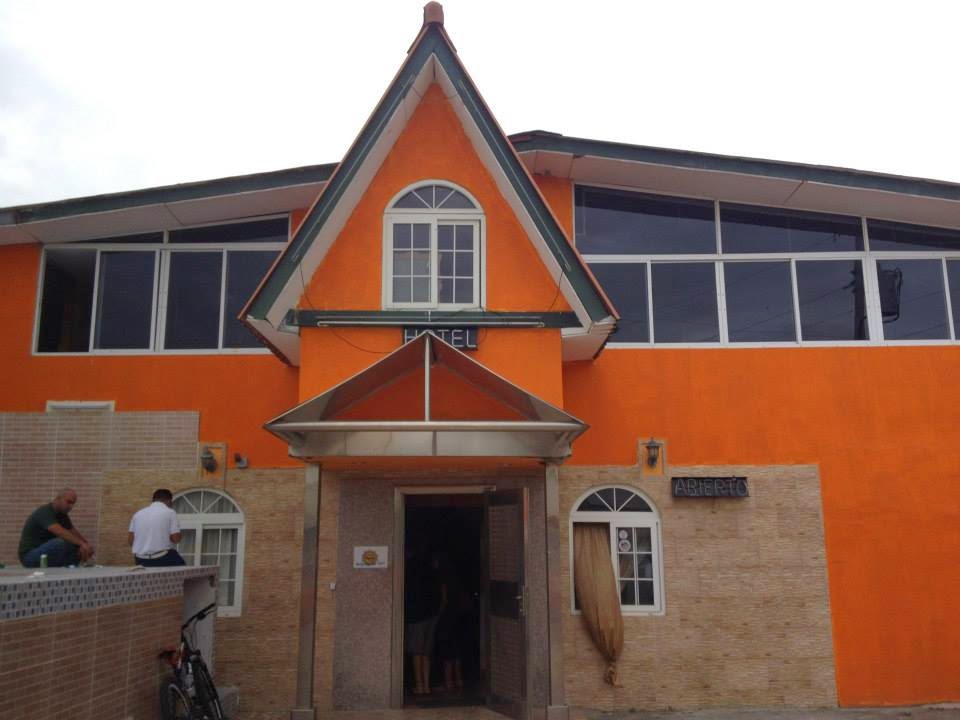 The next morning we left the horrible hotel bright and early around 5:30 am.  We did manage to suck up some free coffee along with some free cookies to take along for later on that day. The road to the Kuna comarca was long, steep and windy and required a 4x4 vehicle so we took our Toyata Rav 4.  Ray and Allison have a brand new Nissan Xterra which would have done just fine, although we're not sure if the Kuna police would have agreed. Before being permitted onto the reservation we all had to show identification and pay a total of $19, some money for the car and some for each passenger. Clyde was asked a bunch of questions, some of which we understood and some we didn't but we were allowed to proceed.  After what seemed like an eternity we arrived at the Port of Carti, hoping that our ship had come in and was awaiting our arrival.

Suddenly we were surrounded by hundreds Kuna people and our white skin stuck out like ghosts in the night.  Since I booked the trip online through Amazing San Blas Adventures none of the people there seemed to be expecting us, but after a few phone calls a boat came for us along with a bilingual guide.  We had the boat and the guides all to ourselves and we headed out along the crystal, clear waters of the Caribbean Sea. Soon we were immersed in a paradise of islands dotted with palm trees and encircled in white, sandy beaches. 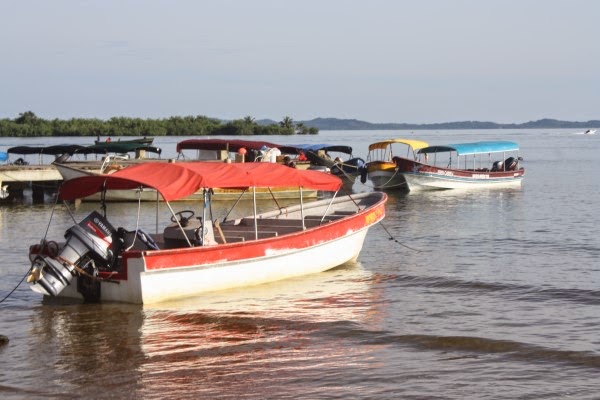 Boats Lined Up To Take Kuna And Tourists To The Islands 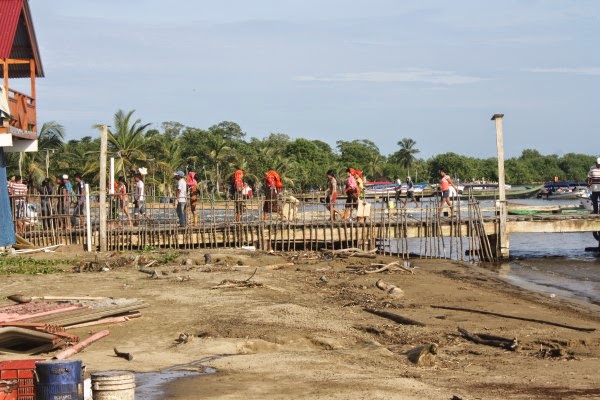 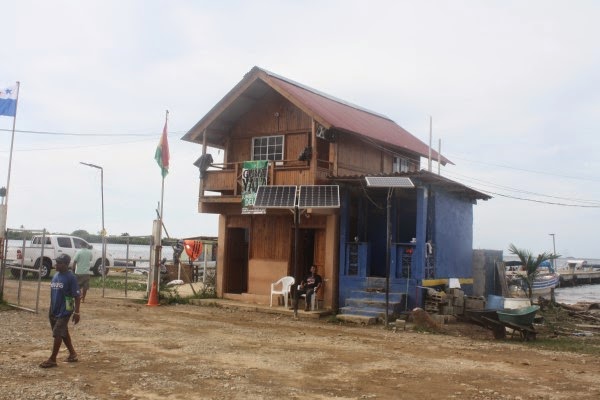 The Blue Side Were Bathrooms For 25 Cents
There Was A Bucket Of Water Near Each Bowl That The Attendant Used After Each
Use, No Flushing Toilets.  Notice The Solar Panels For Electricity In Front 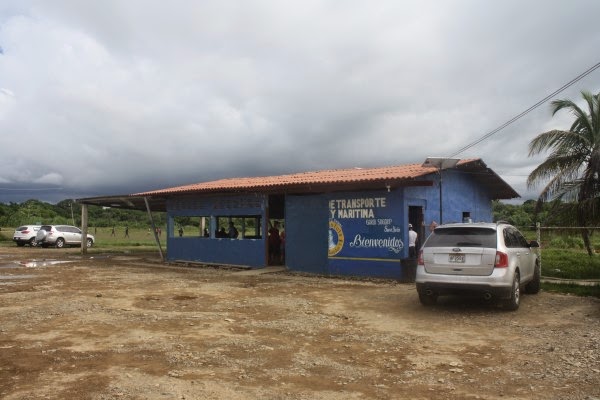 Our first stop was an island that was home to 1,000 Kuna where we stopped for breakfast.  Our guide asked the young girl cooking what our choice was and we were told chicken with either plantain or hojaldras (fried bread) along with coffee.  We all choose the hojaldras and a while later she brought out four plates with sliced hotdogs in a sauce alongside the fried dough. Confused we questioned our guide about the chicken and he told us there was no chicken, but instead salchichas guisadas (sausage stew). The Kuna people are self governing and I'd read it was improper to refuse to eat the food they serve, so I choose to play it safe and eat the food. Besides the fact that I was hungry it wasn't that terrible, just not something I'd eat if there were other choices. 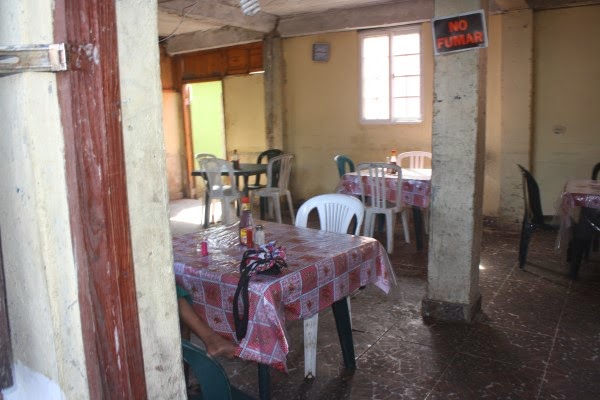 Our Table For Breakfast 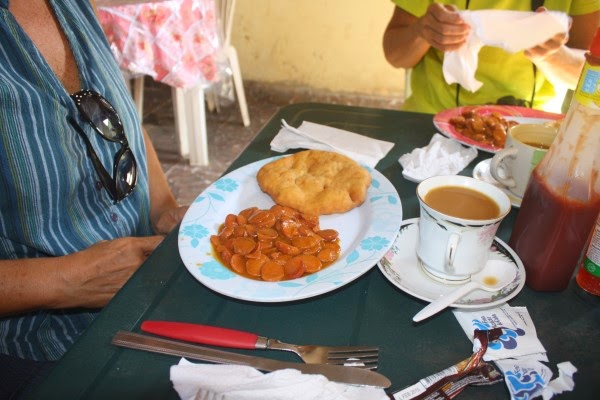 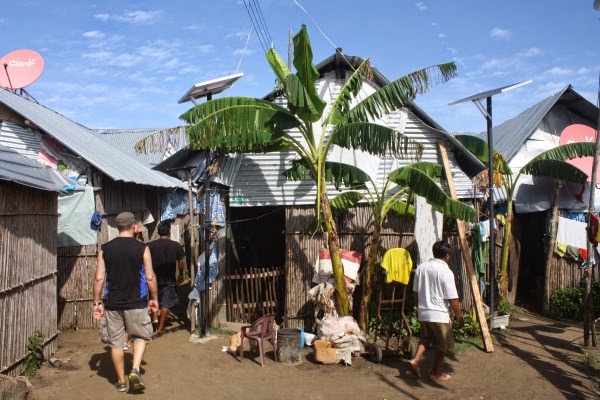 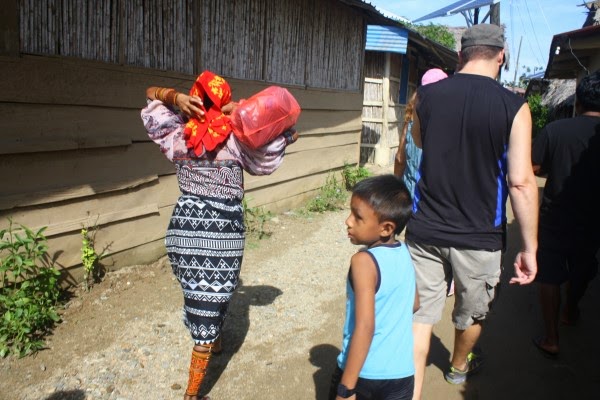 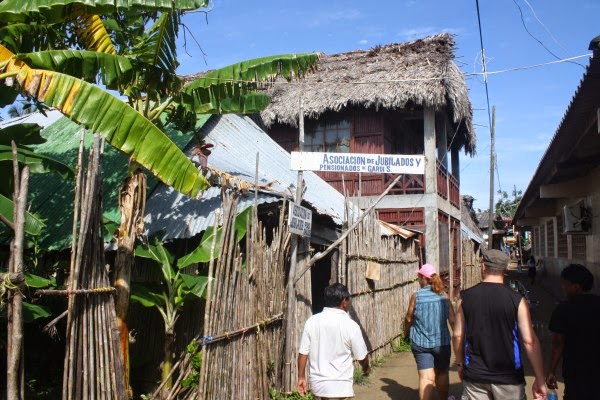 Next our tour guide gave us a walking tour of the little island which was home to schools, a hospital, clinics, stores, restaurants and more. It was fascinating to peek into the tiny thatched houses all built so closely together to get a glimpse of what life is like for these people. Unimaginable for us from the Western world that people could live so simply and so far away from civilization, yet so happy with the only life they've ever known. 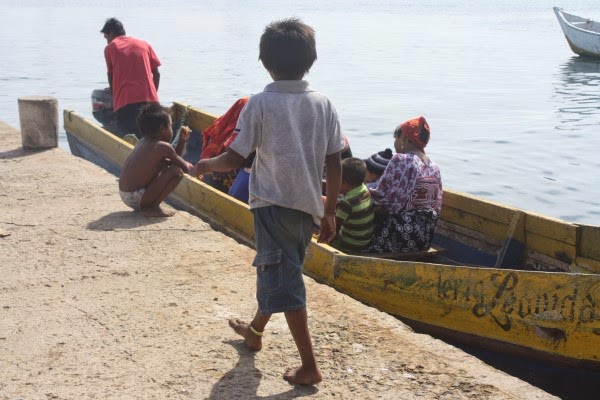 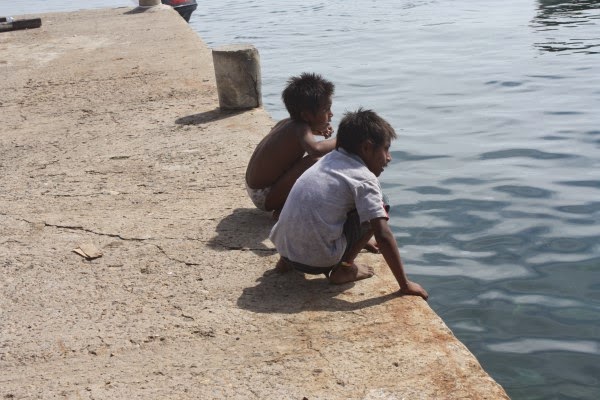 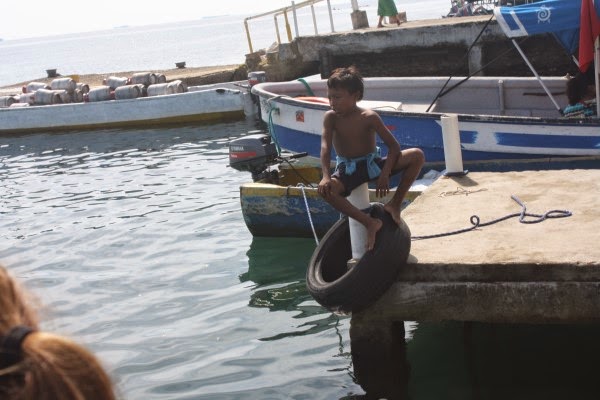 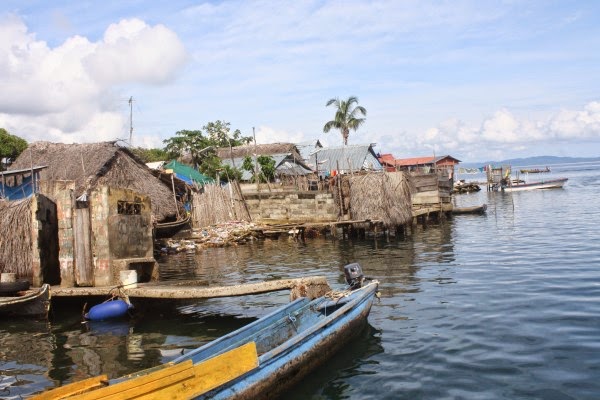 Another Kuna Village, San Blas, Panama
This Isn't For Show, They Really Live Like This

Back in the boat we drove past many islands, some with houses or lodging and others with nothing. Our driver stopped at one small island to deliver four fresh, fish which we were told would be our lunch later that day. We docked at Isla Perro, or "dog island" for some prime snorkeling opportunities near a reef.  Filled with white sand, picnic tables with umbrellas there were other tourists nearby although none seemed to speak English.  After several hours of snorkeling we made our way back to the beach to do some exploring and take a rest.  I noticed some large conch shells lying on the beach and wondered if we could take one, so Clyde asked one of our boat guides that was sitting nearby.  After all we were on Indian land and I did read that we'd not be allowed to take anything away from there without offering money.  But the guide assured us that the shell was free for the taking so we each grabbed one and stashed it inside the boat for safe keeping. 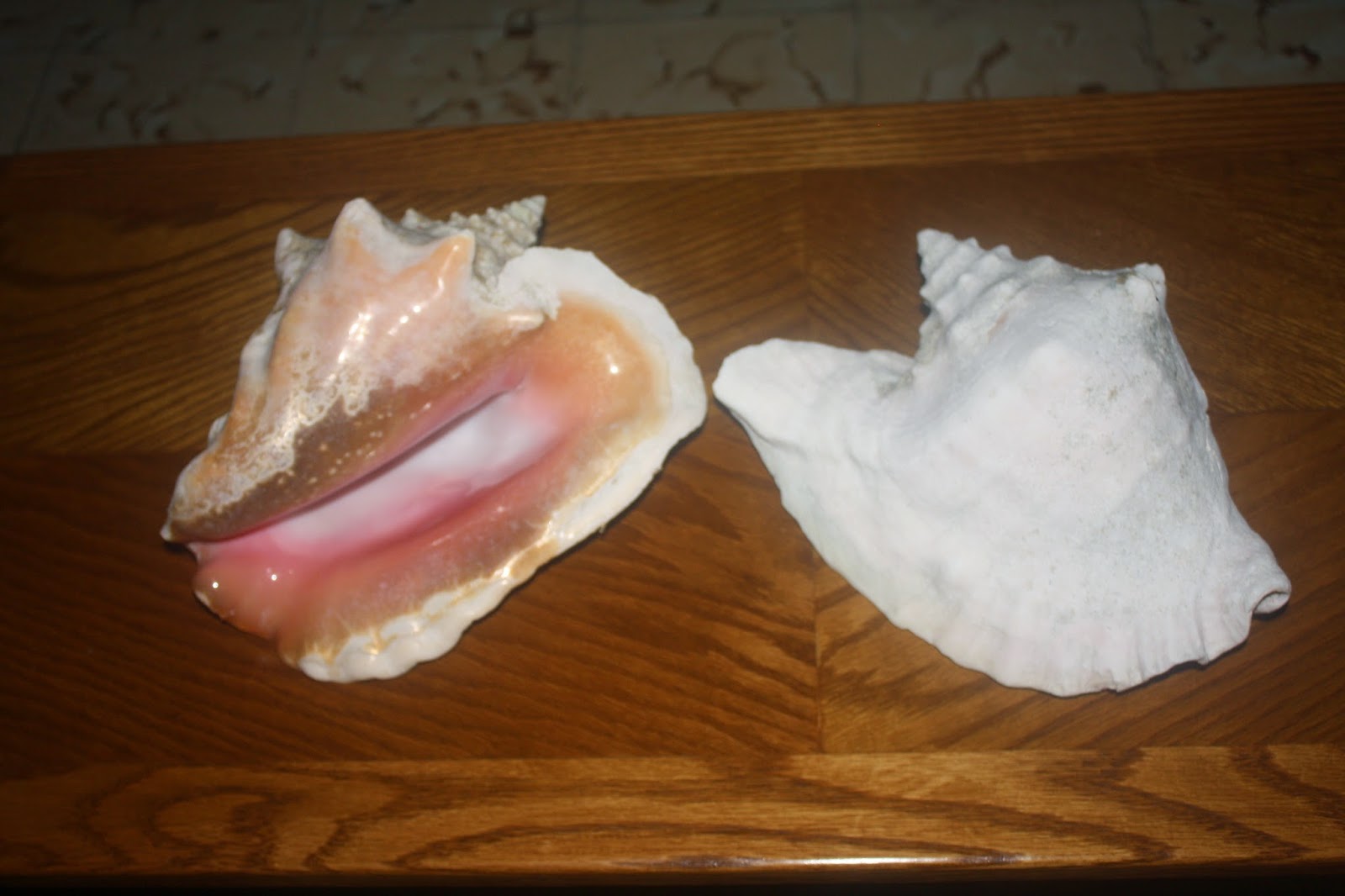 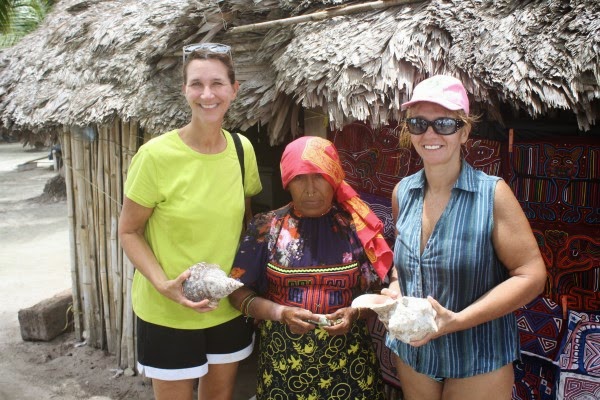 Allison and Terry.....We Each Bought A Shell From This Kuna Woman
But Still Had To Pay Her $1 For Picture 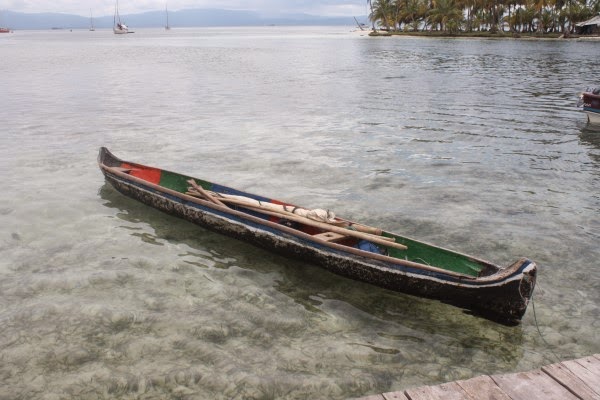 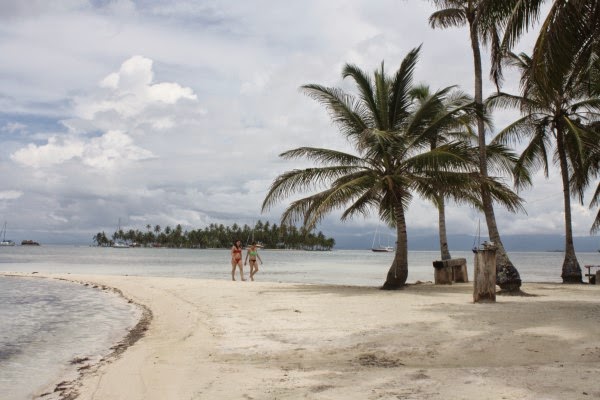 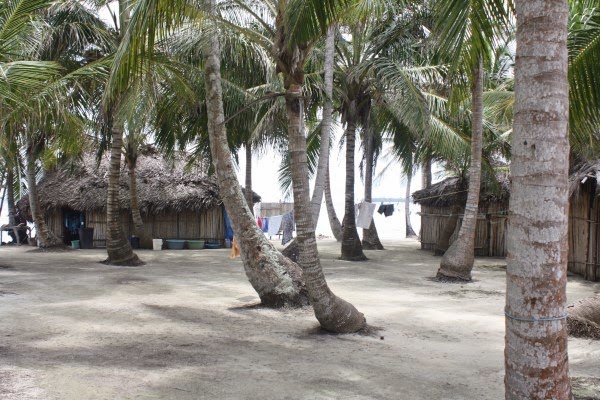 Our next stop was a swimming area where large star fish supposedly hung out, although we only managed to find one along with some huge sand dollars. Our boat stopped on another island where we found handicrafts, food and drinks for sale along with some great photo ops too. There we picked up some large shells for only $5 each, which was pretty reasonable we thought. 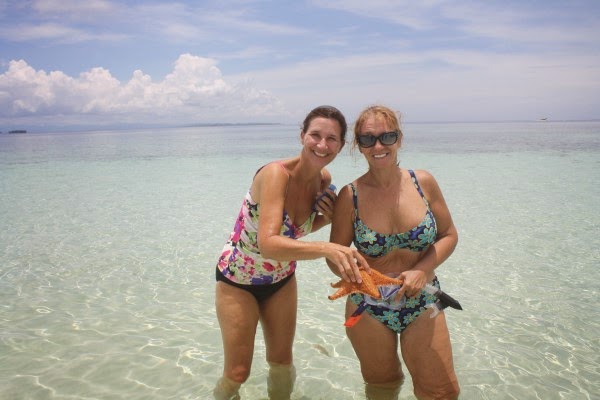 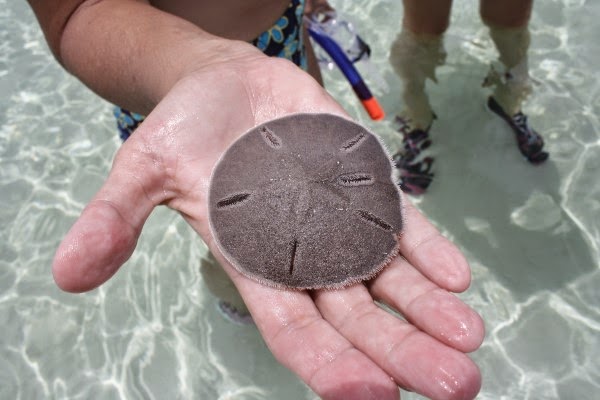 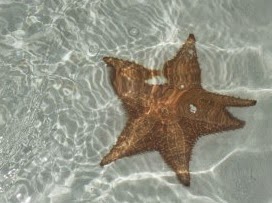 Star Fish Moving Along In Water
﻿

Later in the afternoon we returned back to the island where the fish were delivered.  We found them to be fried whole and served alongside coconut rice, patacones (plantain) and salad for lunch.  We dined at our oceanfront table taking in the sights, sounds and beauty of all that surrounded us in this paradise. 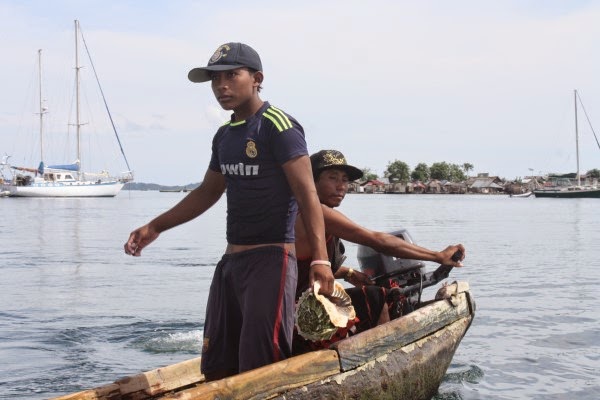 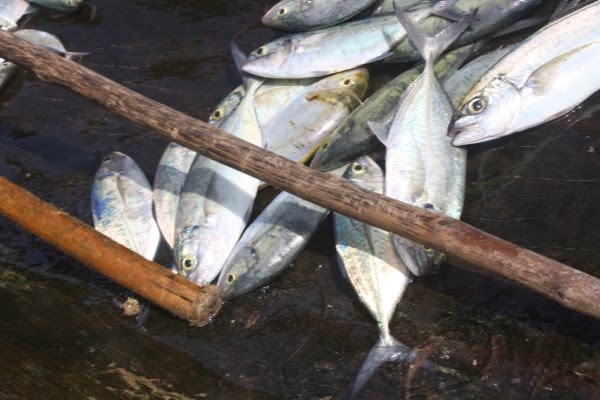 Our Lunch To Be Cooked Later 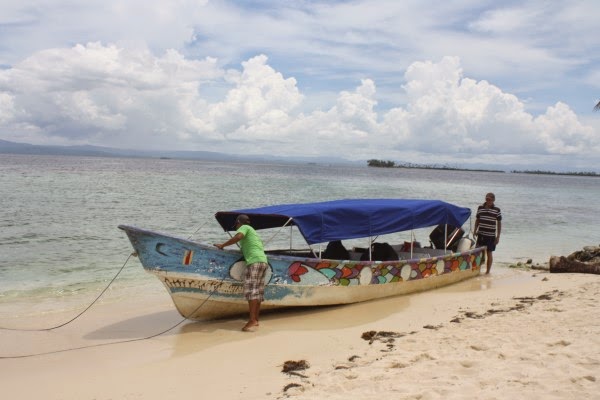 A Boat With Teeth Near The Island Where We Had Lunch 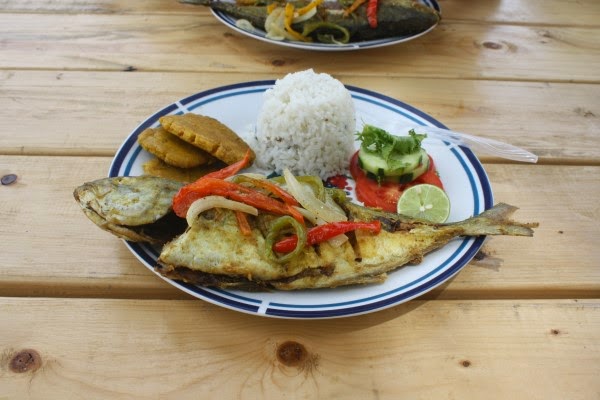 Since it was late in the day we asked our guide if there were any cabanas that we could stay in for the night, looking for yet another adventure. Although there were none on the island we were on after a few phone calls he found us some lodging and once back in the boat we headed to see them. Although we expected them to be rustic, we had no idea just how simple they'd end up being.  A Kuna woman in native attire offered us a cabana on her island.  There were two oceanfront thatched huts that housed beds which sat upon sand floors. The bathrooms and showers were rather far from the sleeping quarters and we cringed at having to walk through thick beach sand after dark. At a price of $60 per person which included all meals, it was too pricey and too rustic for our comforts.  Clyde thanked her nicely and graciously told her that her island was beautiful but we had to decline her offer. 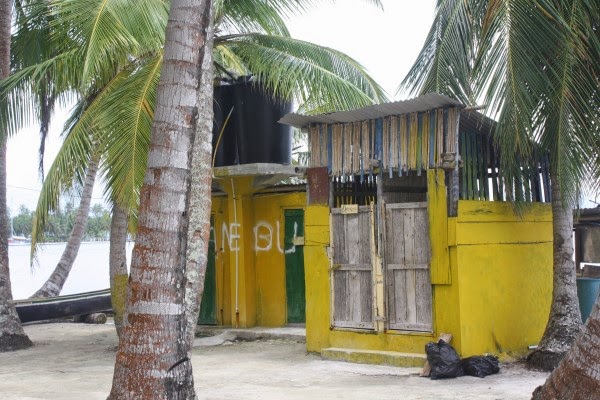 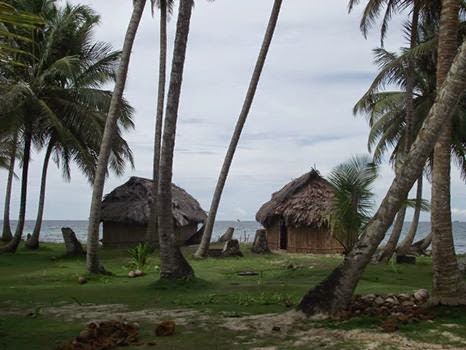 Tired from a long day of fun and adventures we made the two plus hour trek into Panama City to find some modern lodging for the night. Desperate for a shower to clean off the sand and salt water we quickly booked rooms at the Hotel Las Vegas. For around $55 after our 50% pensionado discount, we each ended up with a large suite.  Each room included a living room, fully stocked kitchen, balcony, large bathroom and large bedroom with a king sized bed for some much needed luxury.

After showering and changing clothes the four of us headed out for a late dinner at La Tasca de Duran, restaurant and bar. Owned by the famous boxer Roberto Duran who's movie we served as extras in last year, we had hoped he'd be hanging out there but were told only on the weekends.

Today we enjoyed a free breakfast with our choice of toast, hard boiled eggs, yogurt, fruit, cereal and juices at the hotel before hitting the road for home. Now back to our normal reality we've been honored to be invited into a world we could never imagine exists.  We found the Kuna people to be warm and welcoming allowing us a glimpse of life as only they know it.  I can't imagine living in a world with so little choice of food, drinks, who to date, where to go to school, and all the other freedoms we've come to accept as must haves.  But what the Kuna people lack in choices and material things they possess in the beauty of nature that's all around them.  They bathe in the warm waters of the Caribbean Sea, eat fresh fish daily, dine on locally grown produce and enjoy the riches that nature gives them.  Surely there's a lesson to be learned from all of this, the simple lesson that things don't buy happiness, something we see in our daily lives living in Panama......along the gringo trail.