On Day Two of our adventure in the Azuero Peninsula, Emmett had planned to take us out on his boat.  After a short drive to pick up the boat from storage we made our way to the Puerto Cañas only to find out that the water levels were too low to launch.  TC suggested we head over to Isla Cañas first and take the boat out later in the day, after the tides had a chance to rise. Back in the truck we headed over to Isla Cañas National Park. TC had warned us that if the tides were out we'd have to walk through muddy water to get out far enough to meet the boat so we dressed accordingly with water shoes.  What I assumed would be a short distance turned out to be a half mile to mile walk through muddy water.  We all walked slowly and carefully trying not to fall further into the muddy waters.  While wading through the muddy trail we passed by a mother carrying a baby, children going to school, and pedestrians carrying large bags of rice. 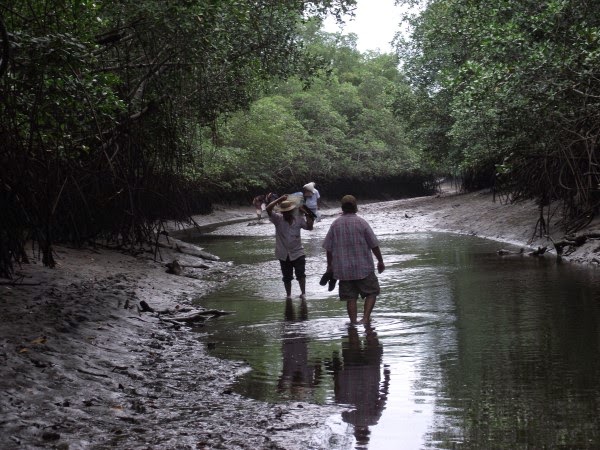 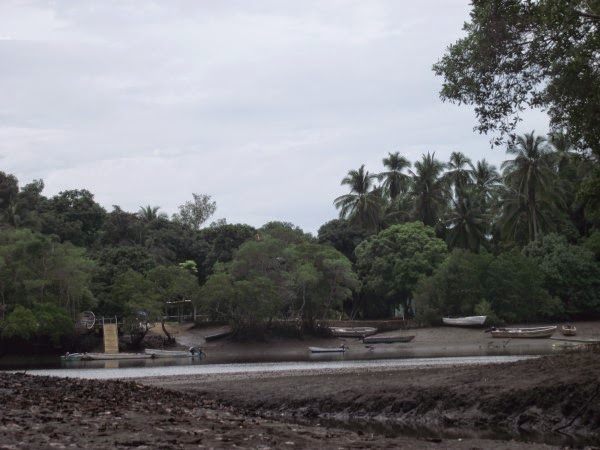 Admittedly, I felt as if I was in an episode of Survivor or in a National Geographic Magazine, lost in a world so unknown to most of us. We trudged on through the mud until we spotted boats just waiting to transport passengers to the island.  Happy to climb aboard the tiny boat the Captain charged us each $1 for transport and off we went to our island paradise.

Isla Cañas was first established in the 1920's by a few families that wanted to fish, farm and live on the island.  Today the island is home to about 500 people (although we only saw a few), two stores and one hostel with a restaurant attached.  Isla Cañas is only one of a few beaches in Panama where tourists can come to see olive ridley sea  turtles nesting and only one of two beaches where the turtles come to hatch.  The big draw to the island are the arribadas (arrivals) when 40,000 to 50,000 female turtles flood the beach to lay their eggs. The hatchings usually happen during September and October during the first and last quarter of the moon. Although the time of year is right, TC made some phone calls and we seemed to be there at the wrong time to see the turtles hatch. 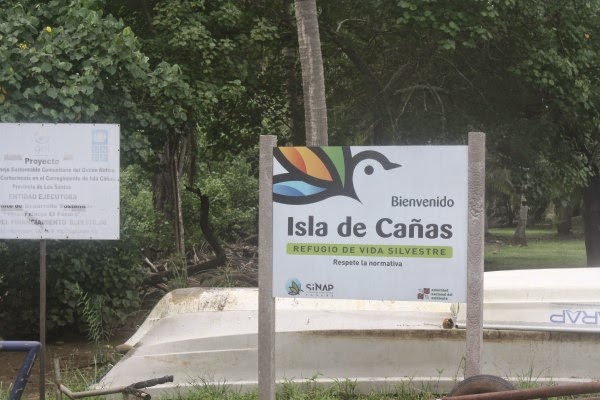 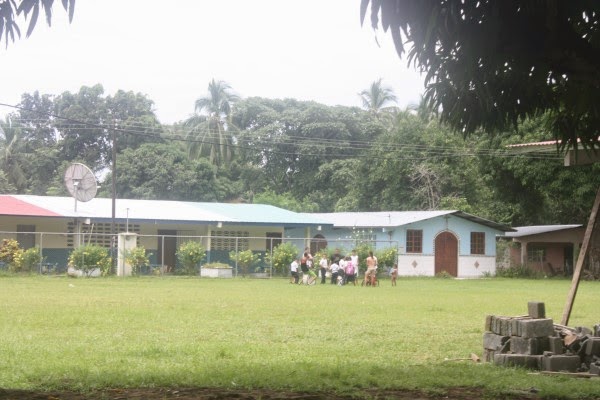 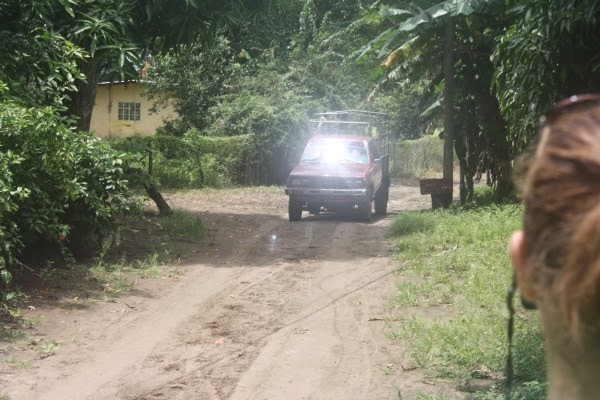 One of the three cars on the island 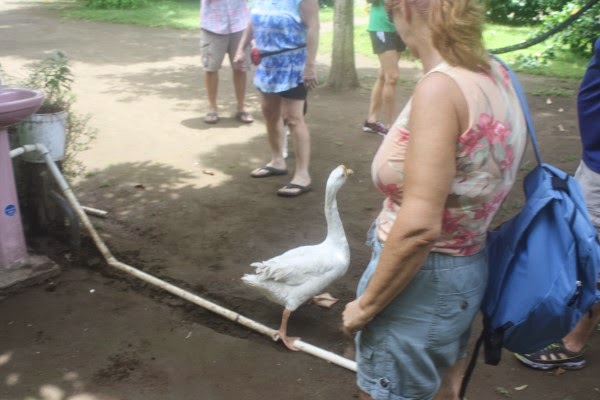 He's checking us out! 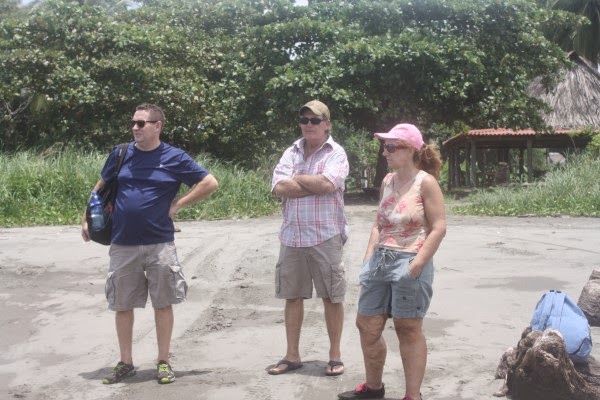 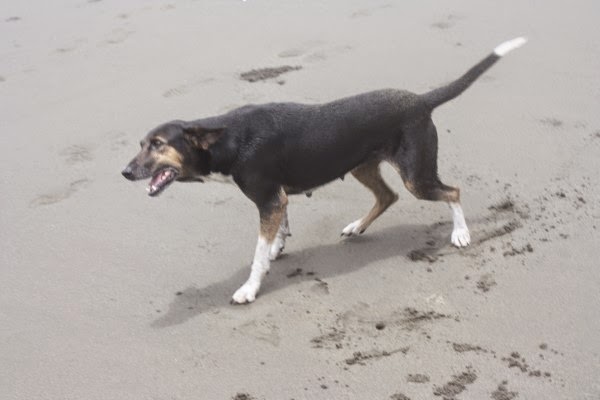 Our Guide down the beach 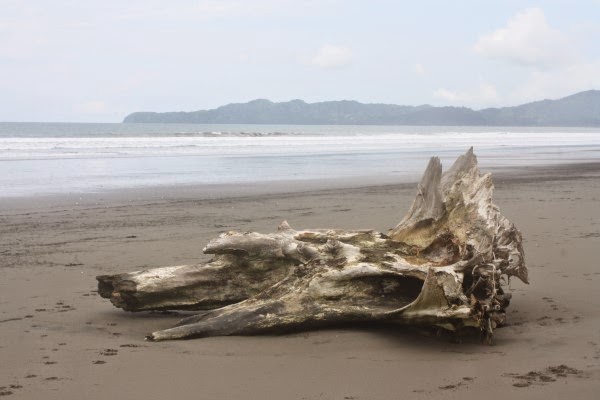 We stopped for lunch at Mama Jitas, Hostel and Restaurant since it seemed to be the only place open.  The restaurant is located in front of her house where we literally sat on her front porch.  Mama Jita was warm and welcoming as she showed us to her outhouse around the corner since we all needed to go.  Despite the way the bathroom looked from the outside the toilet was pink, clean, flushed, had a seat and even offered toilet paper.  Outside near the front of the home was the matching pink pedestal sink where we washed our hands before eating our food.  The rustic little house offered conditions so simple most people would be afraid to sit down. But we all enjoyed a lunch of whole fish lightly fried to a crisp outer crust served alongside rice mixed with seafood.  Chickens pecked around at our feet picking up any dropped rice or fish scraps, while street dogs waited nearby hoping for the same. Everyone agreed that the fish really was tasty and prepared well and the rice wasn't bad either.  Of course we were hungry and there's wasn't much else around so that could have helped too.  And for just $4 per meal the servings were so large each couple shared one plate making it even better. 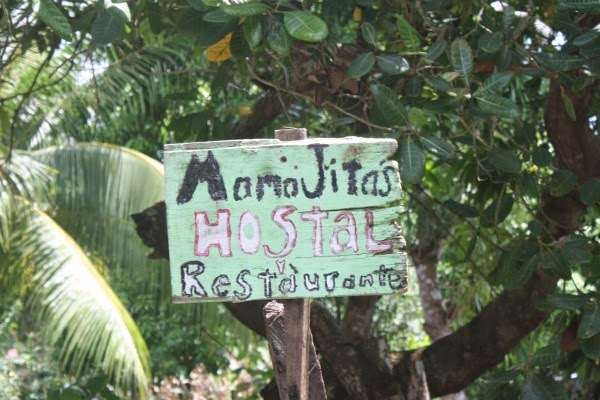 They had fancy signs and everything! 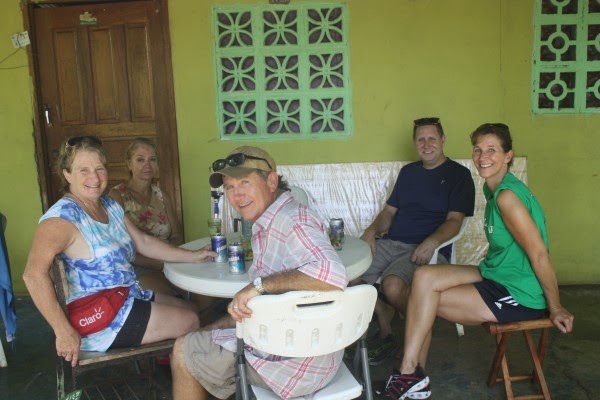 Waiting for the food 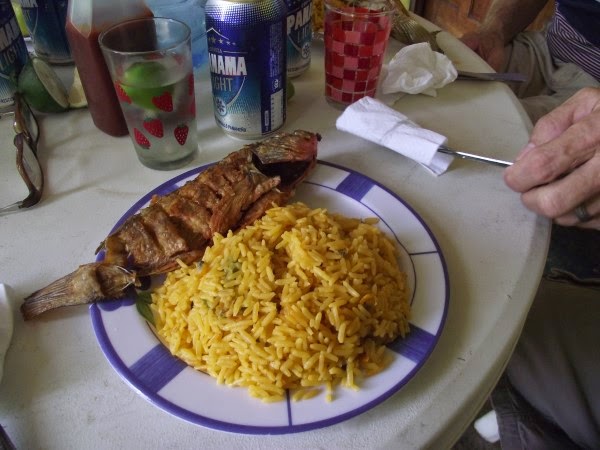 The food is here 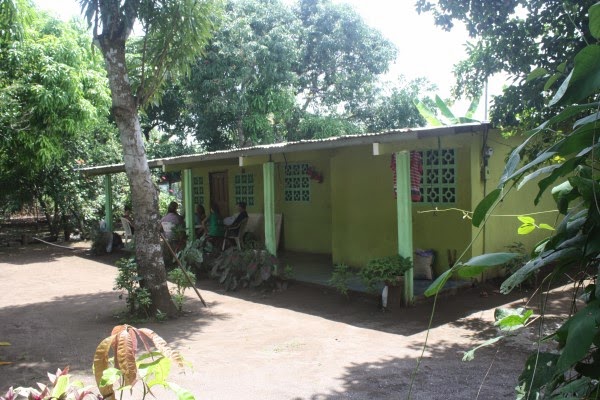 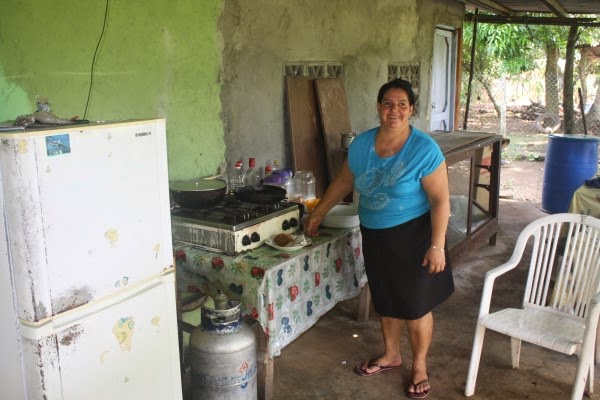 Mama Jitas in her kitchen 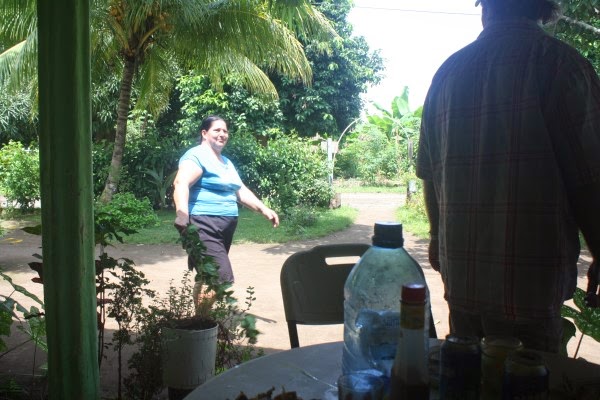 coming to wish us a good bye 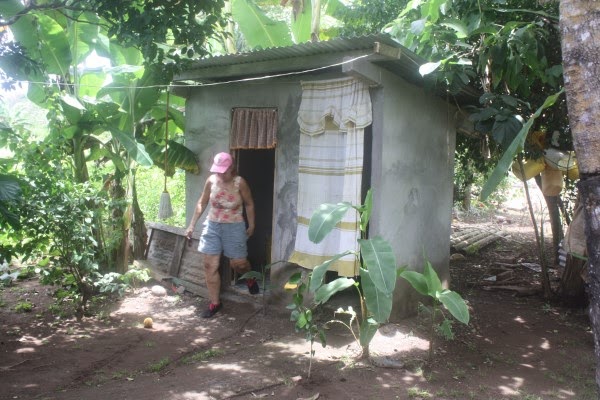 Terry coming out of the outhouse 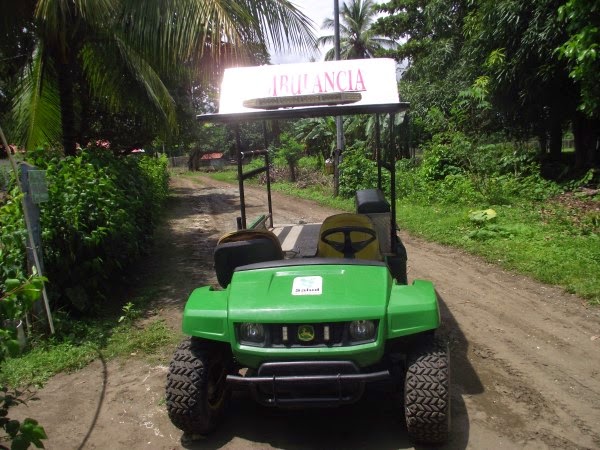 After we had enough of the island we made our way back to the boats and were taken to shore.  But in the meantime the tides had risen and we were able to go from the boat directly to the ramp without walking through the muddy waters again. 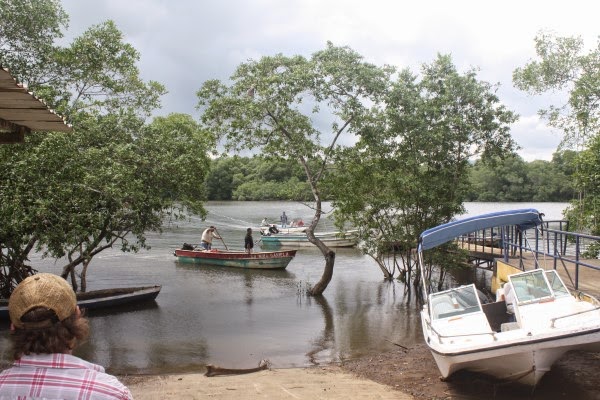 We hopped back in Emmett's truck and headed over to Puerto Cañas.  With the tide higher he was able to launch his boat as we all climbed aboard for a ride through the mangroves. It was getting late in the afternoon and the dark clouds were closing in so we eventually had to call it a day. 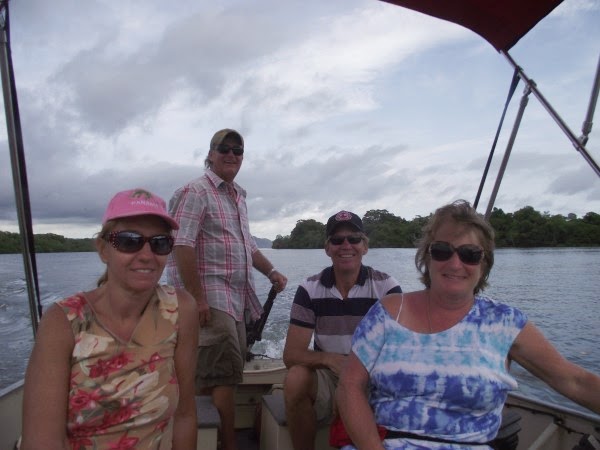 Enjoying the cruise of the Mangroves 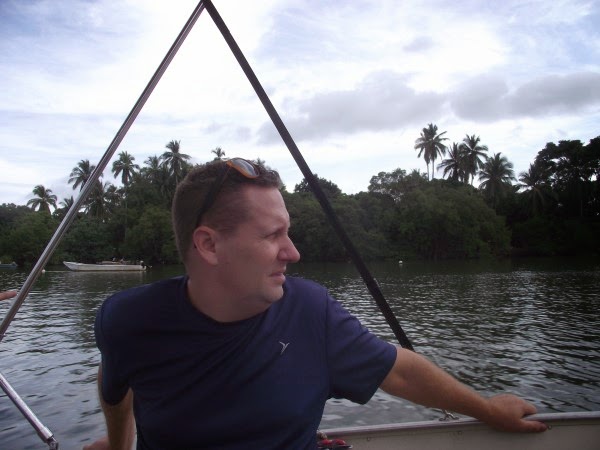 ﻿
Once the boat was safely stored away in lockup we headed back to the house to clean up before dinner. On our way to the house we passed a few people that Emmett stopped to chat with.  Turns out these were the owners of the restaurant where they'd planned to take us for dinner.  The owner simply told Emmett they would be back at the restaurant by 7:30 and if not that he should come pick them up from town.

After we all showered and changed clothes we headed over to the restaurant but the place was dark and appeared closed.  Emmett and TC decided to go out looking for the owner since he suggested they do that, but in the meantime they came walking down the road. We started with  a round of adult beverages and before long the owner brought us another round, before we even asked. 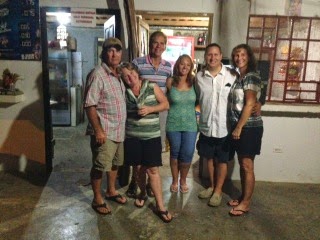 Our Crew at the end of the day
﻿
Since life moves at a snails pace here in Panama the owners were in no hurry to take our food orders or get started cooking.  They came over to chat about our day spent on Isla Cañas and we discussed the hatching of the turtle eggs as best we could in Spanish.  A few minutes later the owner presented us with a plate of something strange. It was a small plate of dried up round things that looked about the size of a brussel sprout.  The owner proudly said they were smoked turtle eggs and encouraged us to try them. I recall being excited yet skeptical about eating such a thing but had to try one to see what it was like.  They showed us how to peel off the outer dried layer to uncover a small, white round egg inside.  We all agree that it tasted like salty, white cheese and some of us went in for seconds since there were more on the plate. Since I'm not a lover of anything salty I didn't care for the turtle egg yet I'm honored to have had the experience to try one. Eventually we ordered our food, more fish with patacones (plantain) along with plenty of limes for our rum drinks and food. It was late by the time we arrived back at Emmett and TC's house and we all were eager to turn in for the night.  We crawled into bed exhausted yet blessed to be part of a culture we didn't know existed before we moved to Panama.  A world of people who welcome foreigners with open arms and allow them a glimpse of life as they know it......along the gringo trail.