Yesterday afternoon our car climbed high into the mountains of Sorá to visit with friends Paul and Nancy. They are the proud owners of the Sunrise-Sunset Guest House of Sorá, a small b&b nestled in the mountains. The four of us headed out on back roads in our Rav4 for a birds eye view of the sunset over the valley below. But the car could only take us so far and we had to travel the rest of the way on foot. We hiked to the top of breathtaking peaks that opened up to views of the Pacific Ocean, the beaches of Coronado, and various mountain ranges all around us.  The winds were heavy at the top as the trade winds seem to have changed direction these days. A welcomed sign that the dry season is upon us or at least, just around the corner. 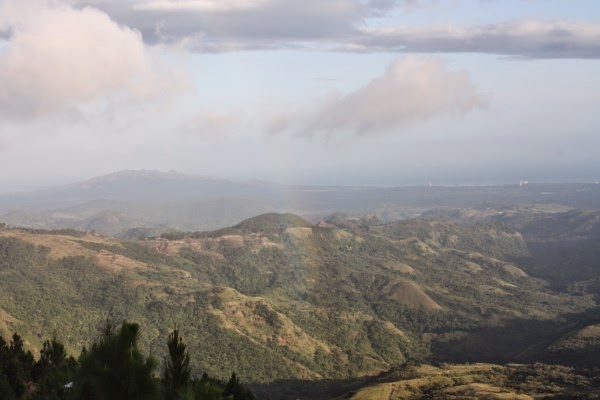 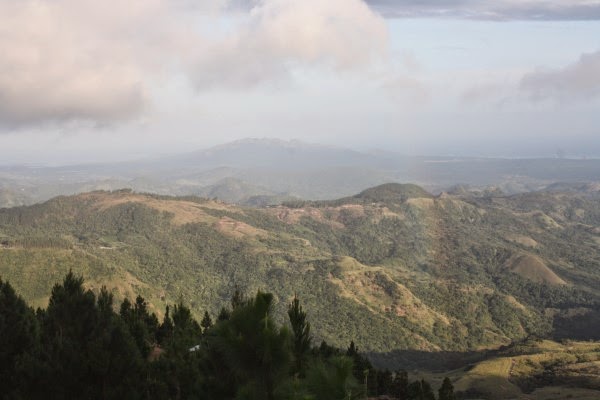 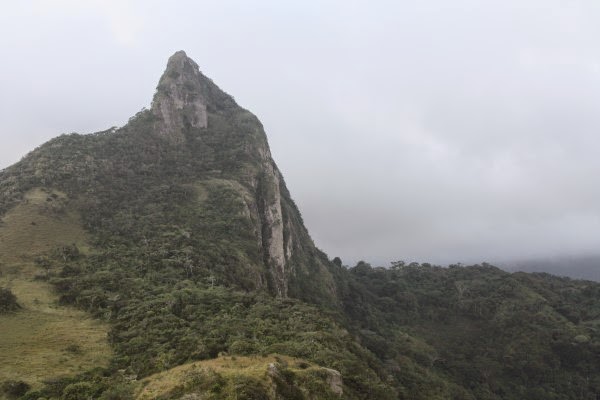 Mount Picacho Is The Tallest Peak 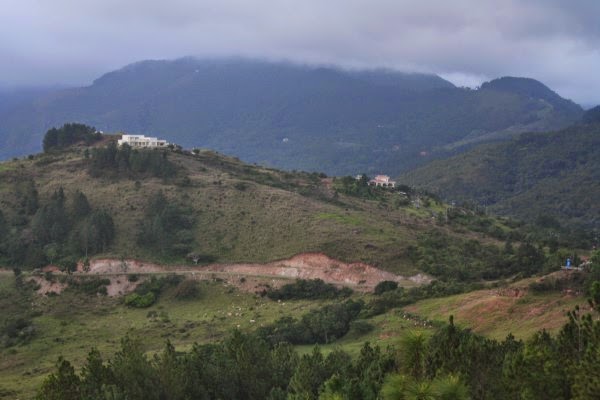 As nightfall came we headed back to their place to enjoy some desserts on the veranda enveloped in the cool night air. A while later we were entertained with a fireworks display off in the distance, a rather common event here in Panama.  Here is a link to their B and B.
http://www.sunrisesunsetgh.com/ 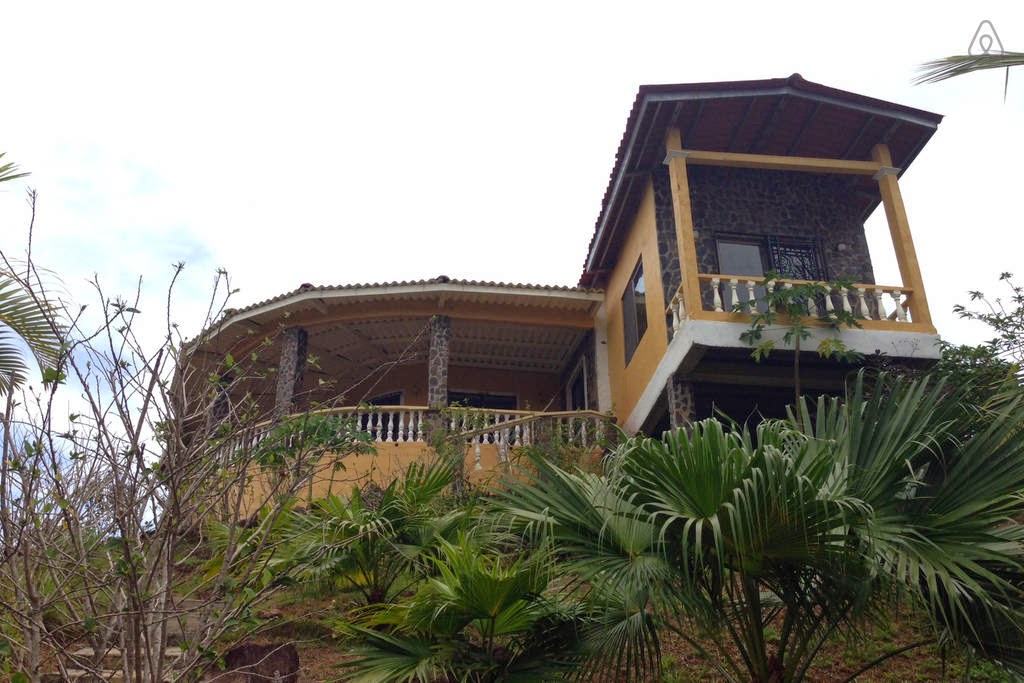 Later on as we headed down the mountain for home we almost immediately were slowed down by a truck with no lights. But soon our headlights focused on a fluffy, cream-colored arm in the road on the passenger side.  I yelled stop, "it's a sloth," as Clyde stopped the car and fumbled for his camera.  I figured since the sloth IS one of the slowest moving creatures on earth we should have time to fetch the camera before it was out of sight.  The huge, furry creature was amazing as it pulled itself across the road with long, hairy arms.  It didn't seem to mind two humans gawking at it and snapping photos.  Clyde was able to get astonishingly close to it but she did hiss and reached up her arm when he bent down to pet her. Once she crossed the road she began to climb up a tree, as she seemingly stopped to pose for us along the way. What an amazing encounter with a sloth, so up close and personal and unexpected. Never in our lives have we been that close to one of these furry creatures.  She almost looked huggable with her long, tan, soft fur that glowed against the darkness of the night.  Her dark brown eyes met ours and perhaps she understood that we meant no harm.  But instead we were fascinated with this brilliant creature of the night that crossed our path in Panama....along the gringo trail. 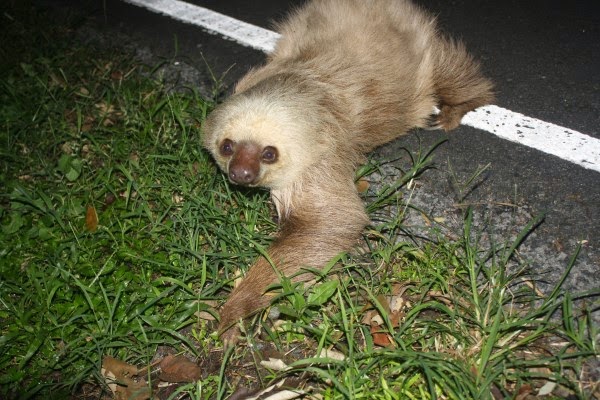 Our Furry Little Friend
In Panama these are called "mono perezoso," or "lazy monkey." 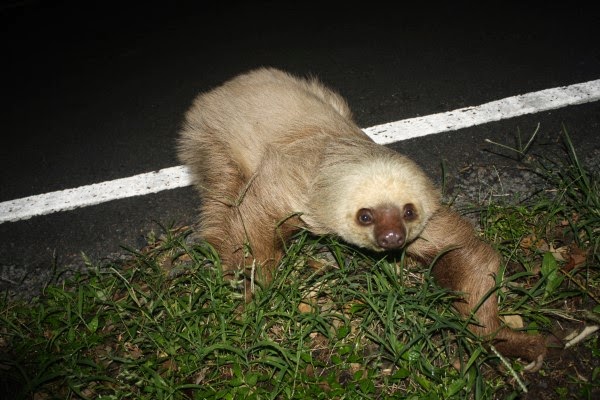 Why Did The Sloth Cross The Road?
So We Could Get Photos Of Course..... 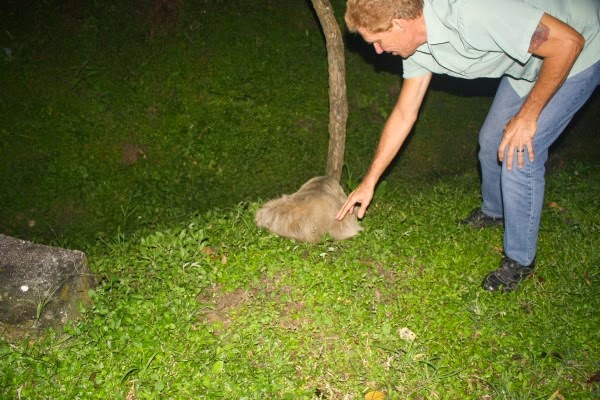 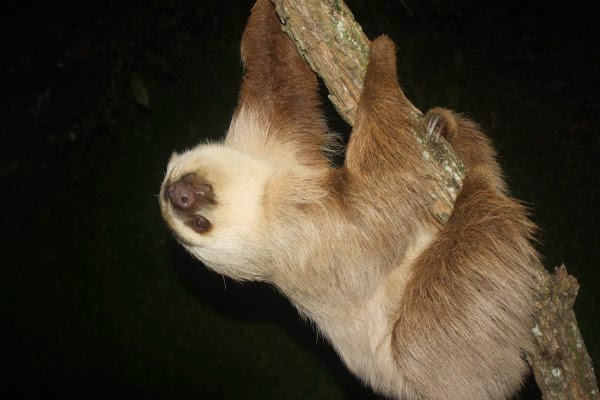 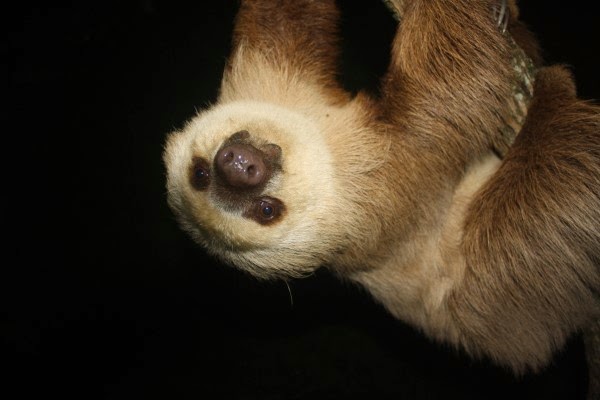 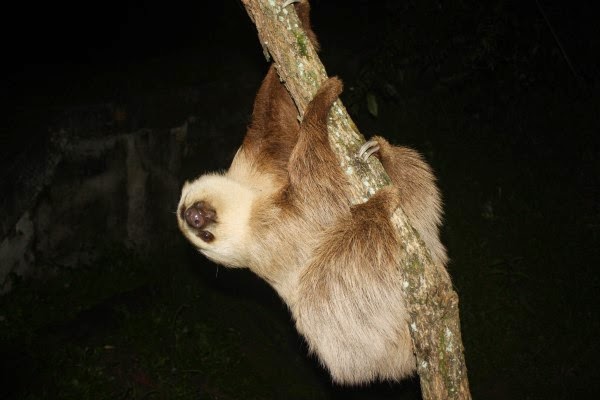 One More Pose For The Silly Gringos
﻿