A Roadblock And Other Stuff From Panama......

The Pan American Highway is the ONE and only main road that runs through Panama.  When anyone has a gripe with the local government, the easiest way to get their attention is to create a roadblock.  Today while Clyde was working in the yard I decided to head over to the gym.  It was around 10:45 that I passed by the local high school in the town of Chame where we live. I noticed students in uniforms lined up in front of the school, many were sitting on the curb along the edge of the highway.  Nearby were several police cars along with some officers standing in front of the school. On any given day it's not uncommon to see hoards of school kids lined up along the road.  Usually they're waiting for public transport for a ride home, or cooling off eating a snow cone since there's always a vendor nearby selling them. Although I thought things seemed a bit odd today with the police presence, things are very often odd to us foreigners living here.

As I made my way home from the gym some two hours later, tired and hungry I noticed that traffic had come to a dead stop.  I was excited at first thinking I'd be going through my very first police checkpoint alone.  After stopping the car I quickly rummaged through my purse to find my license and cedula (local identification card).  But soon I realized that this was no ordinary police checkpoint and something strange was going on.  Some cars, trucks and even buses managed to drive over the curb onto the grass along the road and turn around. But my car was pretty snugly fitted in between the other vehicles so I knew I wasn't going anywhere.

I thought I'd call Clyde to let him know where I was and that I might not be home for a while. As soon as I explained my situation he said, "there was a post on the internet that there was going to be a roadblock in front of the high school today."  "Uh oh, " I thought, "so apparently that's what this is all about?"  I was just approaching the area of the high school, which coincidentally was just around the corner from our house.  How long might this last?  Minutes, hours or days I wondered?  In the four years we've lived here we'd heard about the indigenous people here creating road blocks but school kids?  This was something new to us and WHY was this allowed? 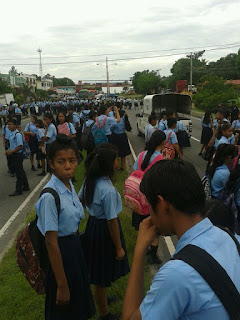 Roadblock At Chame High School
Apparently The Kids Were Protesting Electrical Problems At The School
(Photo Borrowed From Playacommunity.com)


As I sat I noticed people from other cars getting out and walking ahead to see what was going on.  I could see some taking photos before getting back into their cars and turning off the motors, apparently realizing that this was going to take a while. There was a tanker truck in front of me blocking my view so I couldn't see anything.

After sitting there about 30-minutes I noticed a police car with lights flashing head toward the school on the other side of the highway. But as soon as it approached the scene it drove in reverse, turned in a nearby bank parking lot and took off in the opposite direction.  Could it be that they're NOT even letting the police onto the scene?  A few minutes later not one but two police cars approached the scene again on the other side of the road.  Other people began to start their engines so apparently they knew something that I didn't, that the roadblock was stopped by the police and we'd be allowed through. I pulled into my driveway a few minutes later so thankful that it was only 40-minutes that I was held up on the road.

A few days ago Clyde noticed something different about our neighbors house across the road.  There was a small addition on the front of the tiny house, perhaps an extra bedroom?  After all there are four, five or more kids living there and Mama is always screaming at them.  So an extra room would be appropriate.  But the family doesn't own the house they're just renting.  We know this because a man shows up in a blue Toyota Rav4 every two weeks to collect the rent.  We've heard them arguing about money once as we walked by with the dogs. And the addition went up rather quickly and was done with drywall instead of the typical cement block construction that the rest of the house has. The room was done nicely yet wouldn't be waterproof in the rain we thought.  But again this is Panama and things are done differently here, so who are we to say.

Well today I noticed a large sign on the front of the little room that says, "La Tienda de Shantal" or "Shantal's Store."  Panamanians are inventive people that will sell just about anything to make a buck so perhaps that's what this will be? After all this family has chickens so they might have fresh eggs to sell.  And they also have fruit trees so they'll surely be selling mangoes, coconuts, bananas, papaya, homemade ice pops and whatever else they might have. 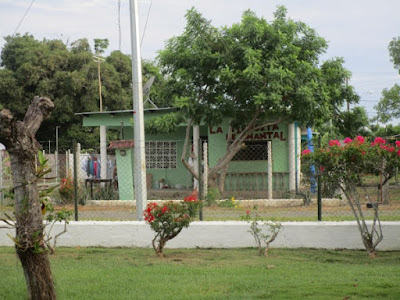 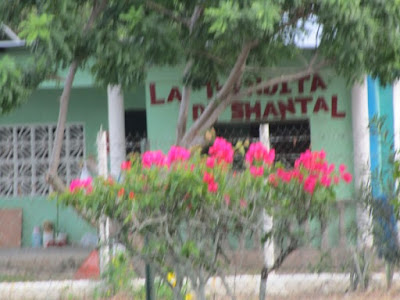 ﻿
﻿
At first I wasn't thrilled about the tiny tienda in our neighborhood but then we realized this. Perhaps next time we need eggs or a pineapple we'll merely have to step out of our yard to get one.  And at the same time we'll be helping out our neighbors, giving them a bit of money to feed their many kids which may in turn make Mama yell less? We've nicknamed her "Mama Grita" which means to yell in Spanish.  While we may not be fluent in Spanish we DO know the names of most of her children. There's Jose, Juan, Miguel and Shantal to name a few.  And what's even worse is that they have parrots that mimic the sounds of her yelling at times keeping the neighborhood lively..... as the sound of Mama resonates through the neighborhood here in Chame.....along the gringo trail.
at August 10, 2015