When visiting the rain forest during the rainy season one should expect some rain.......perhaps? So yesterday we headed out to another national park not too far from our house sit home.  As we made our way to the ticket booth the sky grew cloudy and we thought, "uh oh." But many times here the rain can be seen all around us but never lands on our heads, so maybe this would be the case today?
The short trail was only supposed to take us about an hour so we walked slowly taking in the sights and sounds trying to catch some animals.  But then we spotted an off shoot of the main trail that took around about off the beaten path, until we feared we were lost.  It began to rain but we felt nothing as we trudged through the dense cover of the jungle that acted like an umbrella.  We stopped to take photos of a pack of monkeys before the skies opened up and soon we were drenched. 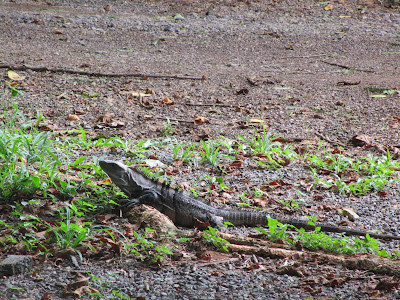 
Carara National Park was established in 1978 as a biological reserve, but it became so popular the government turned it into a national park. Located about 30 miles west of San Jose and 15 miles north of Jaco, for us it was too close not to explore. The park is said to have one of the largest remaining populations of scarlet macaws in all of Costa Rica, but we didn't manage to see one.
But we did catch a glimpse of a poison dart frog, tons of leaf cutter ants, an agouti, and monkeys so we consider our day a success.

As we come to the last few days of our time here in Costa Rica I thought we should post some photos of our neighborhood.  The house sits in the tiny pueblo of Playa Bandera, which in English simply means, "Flag Beach." The tiny village has a church, two small stores, a school, a few small restaurants, public swimming pool owned by a gringo, rice fields and thousands of palm trees filled with monkeys. 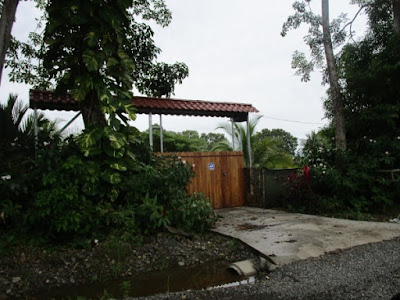 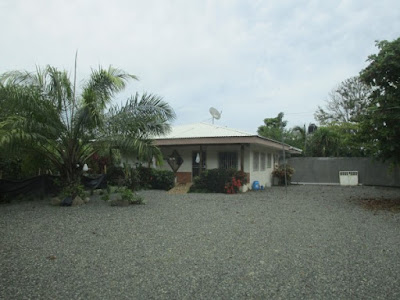 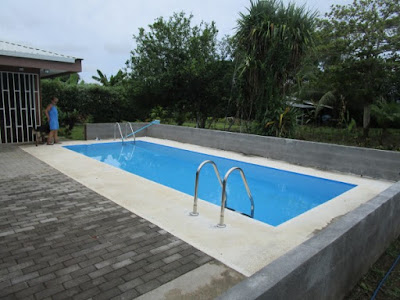 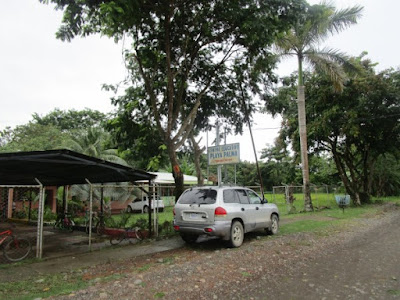 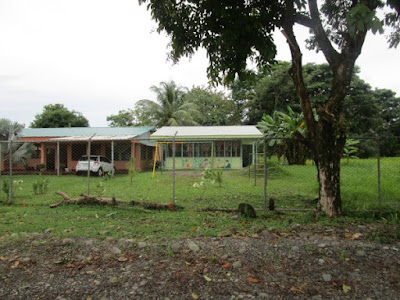 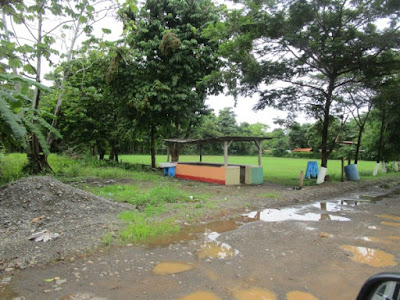 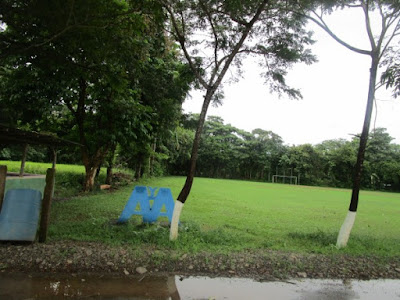 Another View....AYA Is The Local Water Dept 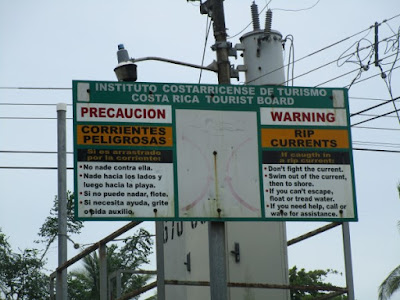 Warning Signs On All Beaches 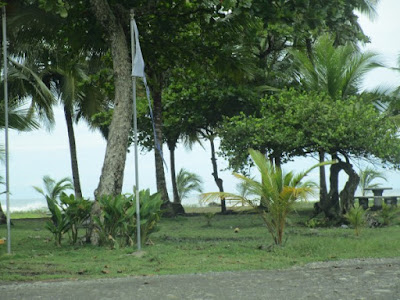 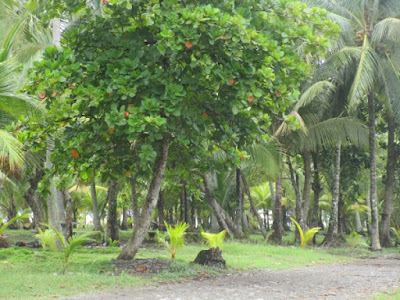 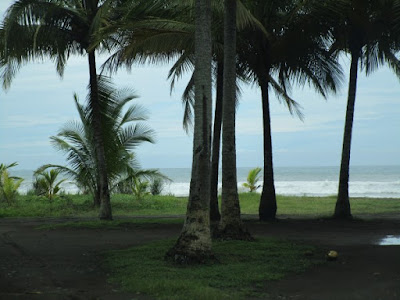 Views Of The Beach 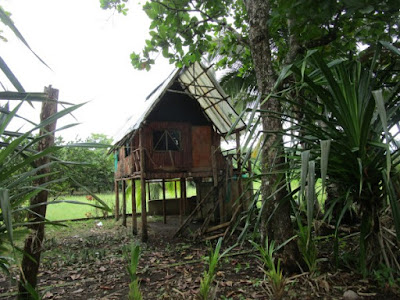 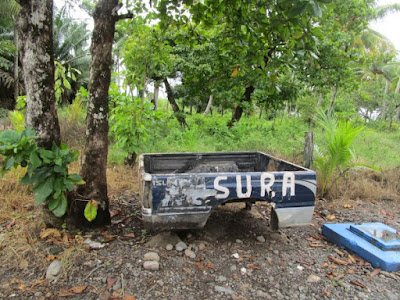 "Basura" Trash Receptacle On The Beach 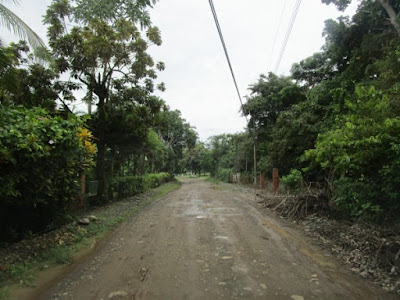 A Road In Our Neighborhood 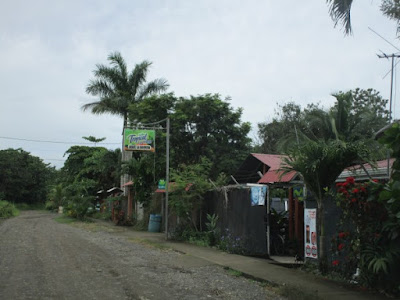 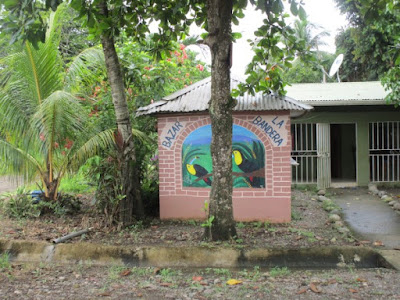 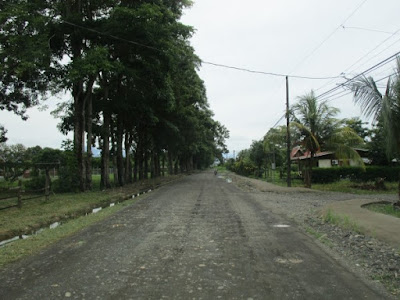 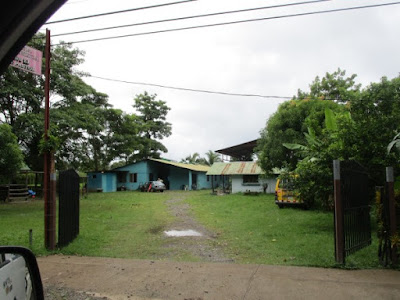 The public beach is kept clean and tidy with picnic tables for the public to use.  Since we're on the Pacific Ocean most of the beaches come with warnings of riptides and are more geared toward surfing than family swimming. While we've enjoyed our time here walking on the beach everyday we both realize that we're not beach people. We won't feel clean again until we can dig the sand out of our toe nails and anywhere else it's been hiding.  Tomorrow we'll say good bye to our furry friends and head into San Jose to pick up the homeowners from the airport. After some drinks and chit chat they'll drop us off at a hotel for our flight back  to Panama on Saturday. Sadly though I do suppose I'll have to put on some clothes for the flight home, a practice I haven't been used to lately while sweating our butts off in Costa Rica......along the gringo trail.
at September 10, 2015