Memories Down The Right Road To Write......

A few weeks ago while stuck in the house during Carnival, the biggest street party of the year we decided to go through some old photos and memorabilia. Instead of getting stuck in traffic and dealing with drunken partygoers we took a trip down memory lane. The journey took me back to the days of my brief career in journalism and my days at the White House. Yep, you read that correctly and I do mean THAT White House.

I found an old scrapbook filled with newspaper clippings of my first "by line," when I worked for The Dispatch a daily newspaper in Patterson, NJ.  Also in there were some articles I'd written along with White House Press Briefings.  I handed one to Clyde who began reading and said, "what the heck is this?" So I had to explain to him how famous I once was......a long time ago. 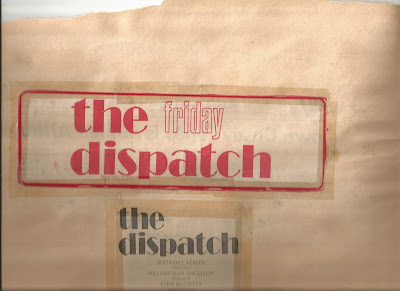 Back when I was in high school between junior and senior year, I chose to attend a six-week summer school for journalism program.  The pricey, exclusive program was geared for writing geeks like myself that intended to change the world someday as journalists.  In my case writing seemed to be one of the things that I was good at in school, so counselors encouraged me to pursue journalism.

So during that summer while my classmates were partying hardy at the Jersey shore I was acting as a pretend journalist.  Along with about 50 other students from the greater New Jersey-New York area who attended the program, I was covering stories and conducting interviews.  The program was held in Blairstown, New Jersey about an hour from where I lived in metropolitan Jersey City. That in itself was culture shock enough.  The tiny, rural, farming community had a few stores, restaurants and shops and not much more.  There might have been more cows living there than humans although I never had to do a story about that, so who knows? 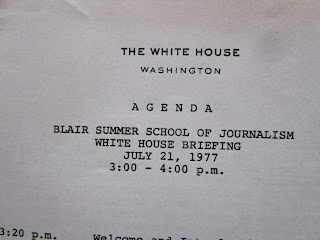 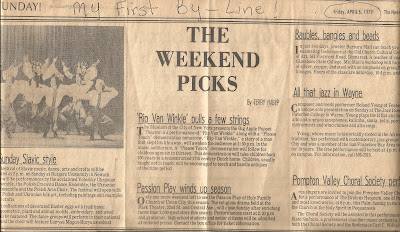 
We were housed in the dormitory's of Blair Academy, a hoity-toity boarding school that was empty for the summer months. Our faculty was a team of journalists and other writing professional from all over the US. Along with classroom time we were sent out into the town to cover local events, police calls, the senior center, farming issues and such. I found some old articles I'd written on the local community action program and senior center, where I had to interview its' director. Along with that was another article that I'd written on feminism which was titled, "My Father Is Having A Baby."  The strange title seemed to have nothing to do with the contents of the article but it still was fun to read after all these years.

Surely the highlight of the program was a three-day trip to Washington, DC where we'd be allowed into the White House as Press.  This was a big deal as our backgrounds were checked, social security cards were submitted, fingerprints and photos were taken to assure the safety of the President Carter.
Once inside we attended special briefings and were handed press releases just like real working journalists. We were given a tour and told where we could and could not go. It was cool to be on the inside and feel as if we were special, real-life reporters covering important events of the President.

Because one of our teachers worked as a reporter for the Washington Post we were allowed a tour of their newsroom.  I recall it being a massively large room full of people, chaos, and noise as typewriters clicked and reporters talked on phones. 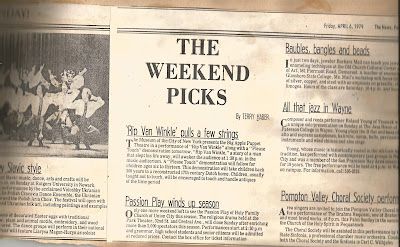 My old scrapbook was protected all those years by my mother who later returned it to me.  Inside was an assortment of pages from The Dispatch bearing my "by line" along with a few old articles that I had written. When I was just 19 years old I dropped out of college after a year of studying communications having decided that journalism might not be for me. While I wrote well in high school and was always good with descriptive, flowery writing, in college I discovered that I was not so good about writing just facts. To me it was boring writing that I didn't want to write and surely no one else would want to read.

But as fate would have it someone came into my life that just happened to work for The Patterson News, the sister newspaper to The Dispatch. About the only thing I remember about this person is that her name was Pat and she worked for a newspaper.  She suggested that I apply for a position for the summer at The Dispatch and gave me the name of the managing editor who I set up an interview with.  Excited I drove my giant Chevy Impala to Patterson, NJ and went inside the newspaper office.  The editor was easy to talk with, seemed to like me and offered me the position.  Back outside I went only to discover that my car had been broken into.  Alone and scared I felt as if I was being watched by people hanging out on nearby porches or stoops as they're called in New Jersey. I put the key into the ignition to discover that the car wouldn't start because they had stolen the battery out of it. Quickly I high tailed it back into the newsroom to ask to use the phone to call my parents. As I waited I remember the editor said to me, "I hope this won't keep you from coming to work for us?"  Later I found out that the neighborhood was so unsafe that the newspaper had a guard to walk women to and from their cars which were kept in a secured, guarded lot that we had to pay for.

Surprisingly enough I was hired as a "gopher" or someone who would do research and help out the reporters. I was thrilled to be working in a real live newsroom and proud to go to work everyday. After working there for a month or so the Entertainment Reporter took ill and left on medical leave. I was called into the editors office and offered the job as a fill-in until she returned.  After a few weeks of filling in I was informed that she would not be returning to the job and it was offered to me full time.  I would be responsible for a two-page pull out entertainment guide that ran every Friday. It was a collection of happenings and events around the community that were sent to me in the mail.  As this was back before computers I would have to type the information, write some information and put it all together with the help of the other staff. Also on a daily basis I was responsible for posting the wedding and engagement announcements in the paper.  As time went on the editors trusted me enough to allow me to write some articles featuring people, events and other things.

Later that year I became involved with a biblical research ministry and decided to leave New Jersey and go follow the ministry.  While my job at the newspaper seemed exciting I really wanted a position as a reporter.  But those positions were only granted to those with college degrees and since I wasn't ready to finish college I decided to leave and pursue other interests.

I spent a year in Idaho which changed my life in many ways.  There I met my first husband who was also involved in the ministry. Soon after I was pregnant and married and went from Florida to New Hampshire where I ended up working in retail management.  Life happened and I never focused on writing again until after retiring to Panama.  It was my wonderful second husband Clyde that noticed I had a knack for writing who suggested I begin a blog.

It was this blog that helped me reconnect with my love of writing which later led me to submitting my first article for publication to International Living. That was over four years ago and since I have had many articles published by them.  Also I've become a featured expat speaker at their conferences here in Panama for three years in a row.

And little did I know at first that my blog was being followed by an old friend named Chris back in Corpus Christi, Texas.  Chris worked as a teacher her whole life and became my early morning gym buddy for a while.  After following the blog for some time one day she sent me a private email complimenting my writing skills.  It went something like this, "Terry you really write well and you should pursue this." Of course I said, "thanks," but really just thought she was being nice.  Again I received an email saying, "Terry I'm serious, you really are good. I taught writing on a college level and I know good writing, and you're good," she raved.  So if you're reading this now I'd like to thank you Chris for giving me the nudge that I needed to submit my writing for publication.  I have since had several of the editorial staff at International Living praise my writing skills recently and maybe I never would have submitted my first article had it not been for your nice comments.

It's funny how life takes its twists and turns and sometimes leads us down unknown roads, to strange worlds where spectacular things happen. Today I'm truly blessed to say I'm making money as a travel writer who will soon be roaming around the world with my wonderful husband. Here's to that young, insecure little girl that wanted to change the world through her writing.  While her life took her in other directions it eventually led her back to a writing career after early retirement in Panama.......along the gringo trail.