The Adventure Continues To Leon, Nicaragua.....

Another long day here in Nicaragua that began at 6am in the city of Leon and ended with margaritas and new friends in Granada.  It was a cool 7 am yesterday when we left our apartment and made our way to the bus station.  We boarded a bus for Managua, an hour bus ride that would leave us at a rather crazy, busy bus station.  Before I really had time to look around we were herded like cattle onto another bus headed to Leon. The tiny van-like bus was better than the first way over crowded larger bus where we were smooshed by strange butts, boobs of sweaty Nicas standing in the aisles.  We exited the bus in yet another bus station where young men were literally in our faces trying to sell us tours of the city.  Once we escaped the vendors we found a taxi to take us to a nearby hotel to see if they had a room for the night.

The cozy B&B called Paz de Luna was recommended to us by our friends Pat and Rich who stayed there in the past.  Since I'm rather picky I insisted on a private room with a private bath along with air conditioning as a way to escape the tropical heat.  The city of Leon is said to be even HOTTER than Granada, so a/c was not an option.  Our lovely room was located off an interior garden area for around $50 for the night, which included breakfast. We were asked to wait a few minutes while they gave the room a once over cleaning so we sat in the little restaurant. Since we'd been up since the crack of dawn I was hungry and ordered some fruit, yogurt and granola with coffee for a healthy late breakfast.  Clyde on the other hand opted for a piece of cake to go with his coffee as we waited for our room to be finished. 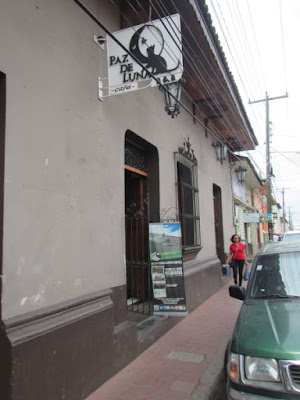 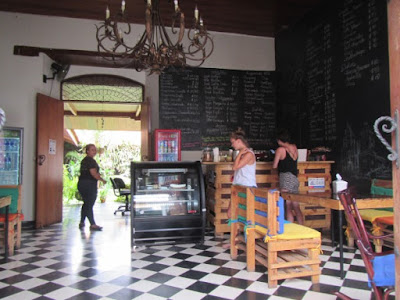 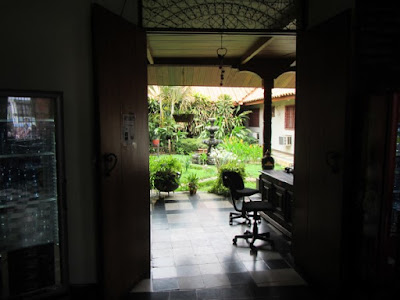 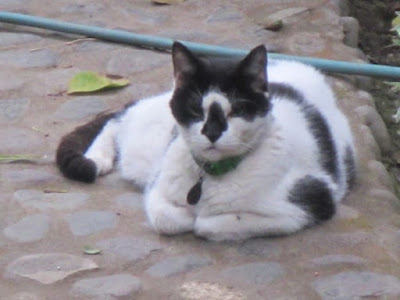 A Fat Or Pregnant Cat 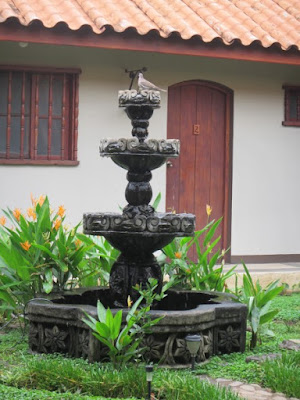 Fountain In The Court Yard

Leon is one of the oldest cities in Latin America and full of old buildings, churches and parks just waiting for tourists.  A city larger than Granada we made our way around by foot until we were drenched in sweat and tired.  Eventually we hailed down a taxi to take us to a cathedral and from there managed to find many of the other historical buildings.  We stopped into a museum of the revolution where a former soldier gave us a tour, all in Spanish of course.  He proudly told us about the history of his country and the war as we dripped in sweat inside the old building that lacked airflow.  But eventually we followed him to the roof of the old building where he lead us onto the old tin roof for a fantastic view of the city.  All I could think was how this would never happen in the US without a law suit.  The roof was creaky and didn't feel safe yet we followed the man to the edge of the roof to have a look around. 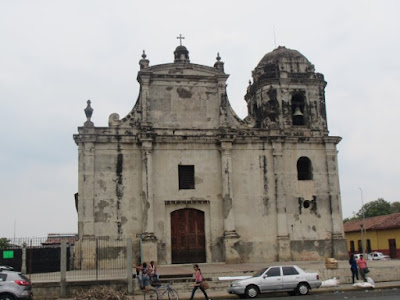 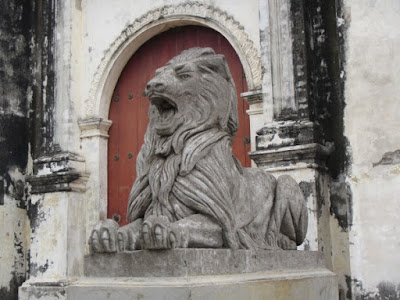 Leon Means Lion In Spanish.....Plenty Of Lions Around 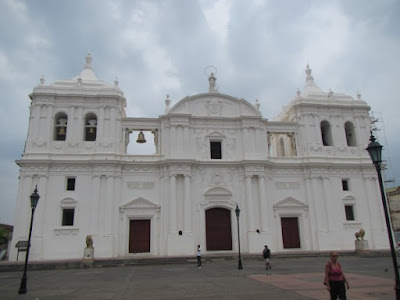 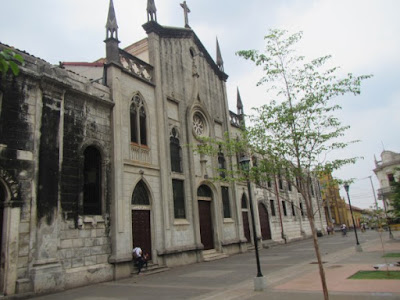 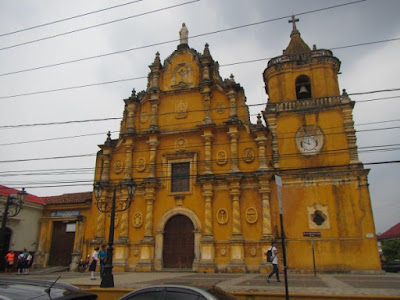 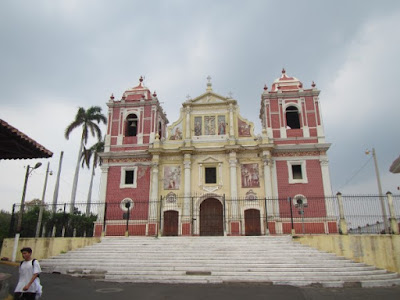 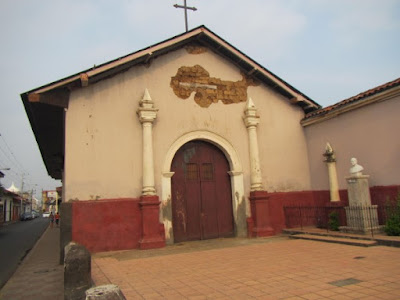 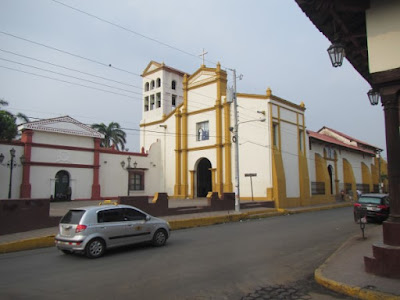 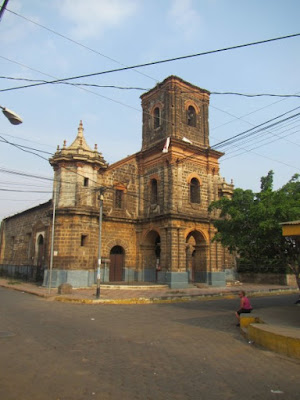 A Hot, Tired Tourist Named Terry Sitting On The Corner 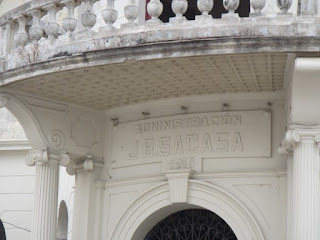 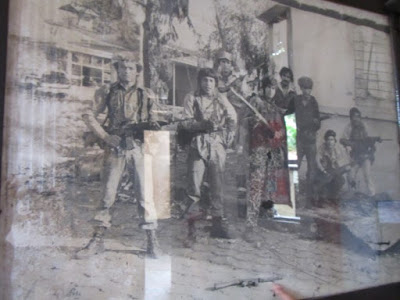 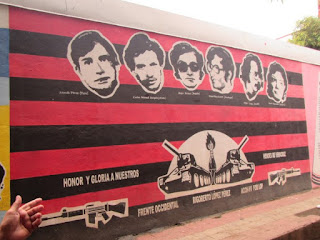 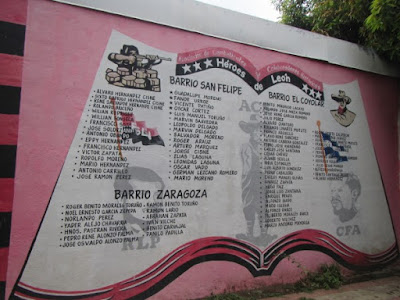 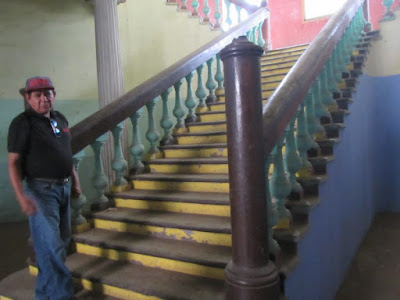 To The Upper Level Of The Old Mansion 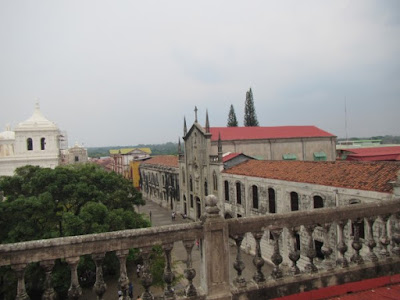 Here We Are On The Old Roof 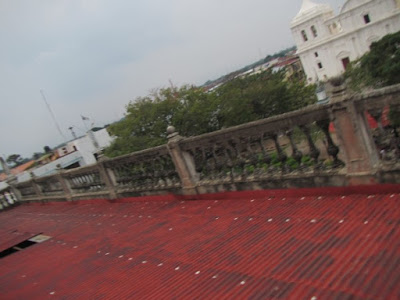 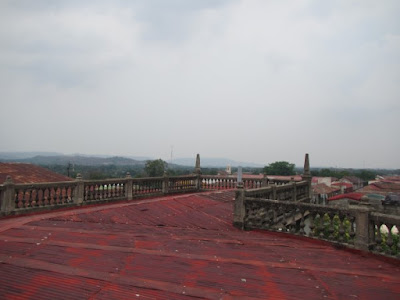 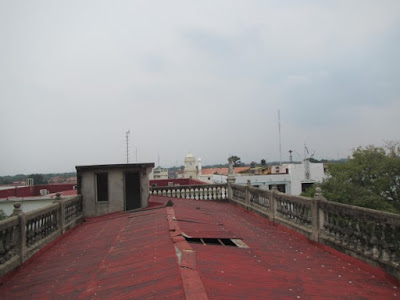 Doesn't Look Too Safe?  Well It Didn't Feel Too Safe! 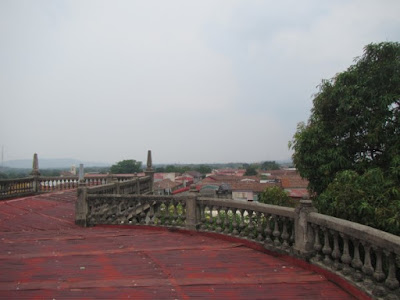 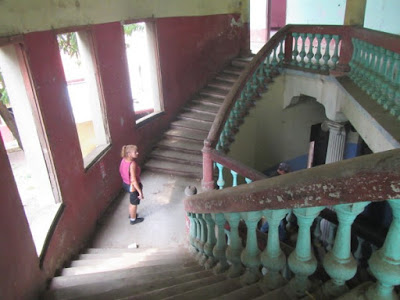 After walking around all day it was time for a well needed cold shower and a rest back in our hotel.  Later that evening we had dinner at a nearby restaurant called Porky's were we chatted with two young men from Switzerland. A bottle of Ron de Cana, the local rum along with some cokes helped the food go down and the conversation flow smoothly. Today we woke up early as we decided to splurge for our trip back to Granada. Instead of taking two buses we opted to take the air conditioned shuttle from our hotel for a price of $30. During the three and a half hour trek we chatted with a young lady from Paris who was visiting Nicaragua. Also in the van were three young people from Australia who were backpacking through Latin America.

We made it back to Granada by afternoon and later met up with some fellow house sitters for drinks.  Four hours later we ended our conversation with them and stopped at yet another Nicaraguan Mexican restaurant for a cheap burrito.  For less than $4 we each enjoyed a chicken burrito as we chatted with other patrons of the tiny restaurant.  Two young men from England sat nearby telling us about their adventures as we told them about ours.

Granada is truly a mix of people from all over the world who are either living here, travelling through or visiting friends as we are. Time to end another long day of adventures with a cool shower and a dip in the pool here in Granada, Nicaragua.......along the gringo trail.