Our last few weeks in Italy have not been much fun for me. While I've long been an allergy sufferer when around dust, mold, or grass to name a few things, sometimes new environments can trigger new allergies. When I was tested years ago in Texas I was found to NOT be reactive to pet dander which means that I'm NOT allergic to animals. But recently while pet sitting in a tiny, stone, dusty, moldy old house with a cat, things took a turn for the worse. Perhaps because the house is vacant most of the time with a cat living alone while the owner works abroad, the allergens built up to epic proportions. Laying down at night made things even worse where I could barely breathe from the extreme coughing, wheezing and strange noises coming out of my sinus cavity keeping me awake. At wits end today I decided it was time to seek medical assistance or visit a hospital emergency room.

With the help of the trusty internet, google maps and dear husband Clyde we set out to find a doctor in the town of Umbertide (uum-BEAR-tee-dee). While we figured it would be easy to find a doctor's office it would be quite another story finding one that speaks English.

With only a small sign on the door that said something in Italian we stumbled into the small office. A boxed off reception office was visible near the door but seemed unoccupied. Simple black plastic chairs formed an L-shape around the office where four other people sat waiting to see the doctor.  The lights were all turned off giving the place the appearance that it was closed, yet these people waited so someone must be there we thought. A few minutes later a woman walked out from the back room followed by an older gentleman wearing a white lab coat who we assumed was the doctor.  He looked at us and said something in Italian.  I asked him, 'do you speak English?' to which he responded, "a little." I went on to ask him if he could see me explaining that we were travelling through Italy.  He said, "yes but it would be a few minutes."  Then he asked, "are you here to see Mommi?" What? While we did notice the signs on the wall for appointments with Mommi along with photos of babies and ultrasound, I just assumed that she was a gynecologist.  I told him that it was not a female issue and seeing him would suffice to which he said ok and went back to see other patients. 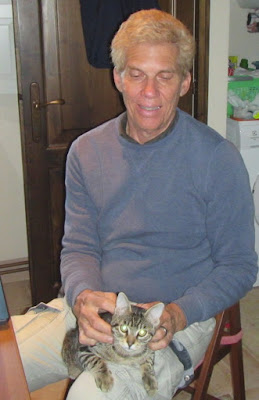 Clyde And Crash The Kitty

As we sat and waited an older Australian woman sitting nearby realized that we spoke English and began to chat.  She married an Italian some 26 years ago and has been living here ever since.  We chatted about Italy and she complained about its government, poverty etc.....the normal gripes people have living most anywhere. After she went into the see the doctor we sat alone in the waiting room. Just then a 50 something redhead woman walked in along with her patient apparently.  She said hello to us in English and said, "how can I help you?"  We explained our situation and found out that she was Mommi, in fact Dr. Rita Mommi.  She said she was not only a gynecologist and obstetrician but is also a general family doctor and certainly could see me if we wanted to wait.

Eventually she finished up with her only patient and escorted us into her office.  The office inside was just as simple as the waiting room. A circular glass-topped desk took up most of the room while an exam table was tucked over into the corner. She sat down and asked what we were there for.  I explained my symptoms as she listened to my lungs, heart and asked a series of medical questions. She prescribed an oral antibiotic-steroid combination, breathing treatments from a nebulizer that she said we could RENT for our stay here along with the medication, and suggested that I continue to take a general allergy medication like Loratadine also.  Our cost for the visit with her was just $40.

Italy has socialized medicine which is free to residents on the system.  The Australian lady that we chatted with in the waiting room gave us her take on this subject.  She said that NO appointments are ever made here.  Instead the patient just shows up during the scheduled office hours and waits.  Sometimes there are just a few patients and other times she would have to sit for three, four or more hours before getting to see the doctor. But for this she pays nothing!

Next we needed to pick up the medications along with rent the nebulizer at a pharmacy, but ALL of the pharmacies were CLOSED. It was during, "pausa" or the Italian's version of lunchtime where most all businesses close for two to three hours for lunch. We decided to give up and come back after 4pm when the pharmacy reopened.  The man who waited on us spoke decent English so no worries there.  The cost to rent a nebulizer was 1 euro per day plus the other medications came to a total of 40 euros, not too back we thought. He recommended that we purchase the nebulizer but we explained we're travelling and since I don't think I'll be using it long term, the rental would do for now. 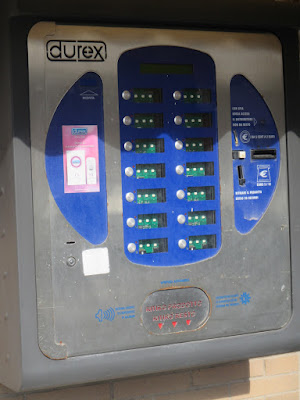 A Condom Machine Next To Pharmacy 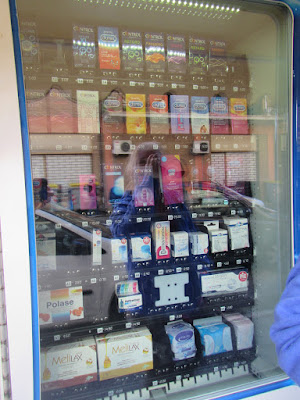 
I suppose my lesson learned here is not to let allergies get this far out of hand.  But just another interesting experience of using a foreign medical system as we've had to do in Panama, Mexico, Colombia and now Italy......along the gringo trail.