Recently I blogged about apparitions said to have taken place in the historic village of Fatima, Portugal. For those of you that don't believe in sightings of the Virgin Mary, perhaps you will be more inclined to join us as we track down DINOSAURS?

Dinosaurs? Really? Here in Portugal? Who knew? Certainly, not us! On our way back to the house, not far from the village of Fatima, I noticed a sign, which of course was in Portuguese. It said something to the effect of dinosaur footprints, from what we could figure so we followed it to see what was there.

Here is the video of our trip

Out in the middle of nowhere was the entrance, marked by a giant statue of a dinosaur. We paid our 3 euros each and were guided through the building to a path. For the next 45 minutes to an hour we followed the rocky path until what appeared in the middle was an area encircled in rope. Once we reached the end of the path we walked down onto the smooth rock surface and literally walked next to over 200 preserved tracks from real dinosaurs that lived here some 175 million years ago. Wow!

According to a Portuguese paleontologist named Vanda Santos, "It's as if the tracks are fresh, like the animals just passed by." The footprints form at least 15 tracks, two of which are more than 140 meters long. The longest track has some 90 footprints. Add to this the 141 meter track discovered near Lisbon a few years back and they make Portugal one of the worlds most concentrated areas of fossilized dinosaur footprints in the world. 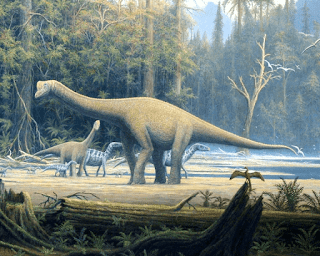 While we know that Europe is old, we had no idea it existed some 180 million years ago!

The tracks consist of the longest and oldest sauropod tracks anywhere in the world, that has been discovered. The sauropods were quadruped herbivorous dinosaurs with small heads and long necks and tails. They are some of the largest animals that ever lived on the planet.

So once again by taking the road less travelled we discovered something new and exciting that happened oh so many years ago......along the gringo trail.