What's going on with those two silly gringos in Panamá these days?  Not much or shall we say life as usual. The air is filled with the neighbor's clucking roosters, talking parrot and surrounding loud, melodic birds.  The air is warm and wet as usual with the chance of an afternoon shower.

For the past three weeks the garbage collectors seem to have avoided our house.  Since we're the only house on the little street with a trash receptacle, it's easy to miss ours.  Clyde's been on a mission to catch them while they're picking up trash on the nearby street.  But since they come around in the middle of the night, that means staying up waiting for them.  And we also have no idea what night they're supposed to come do their pickups.  So yesterday he drew a map showing them where our house is and stopped by the office to complain. 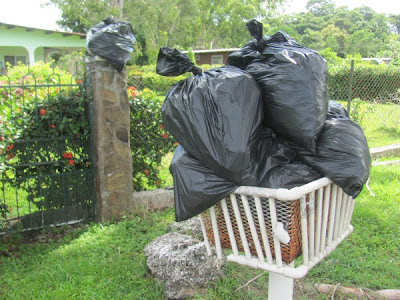 Yes, the "Basura" is piling up! 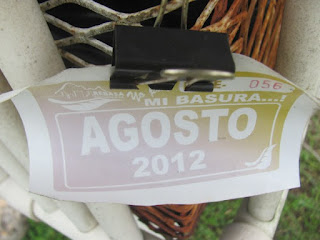 Here's my proof that I paid for August!
﻿
Clyde's decided it's time to start working on house projects like building new kitchen cabinets.  And since it's not simple to find wood here he figured out how many square feet he needs and went around getting quotes.  The choices seem to be "teca" teak or "cedro" cedar wood which are both impervious to termites.  But because teak is so hard the locals wood shops refuse to plane it, so we'll probably end up going with cedar. Either is just fine to me as anything will look better than the old, ugly cabinets that we have now. 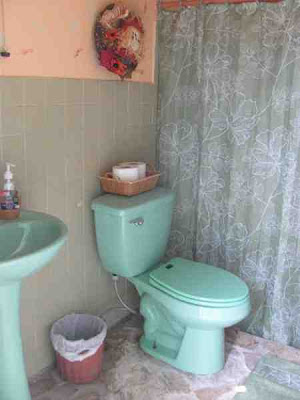 El Baño Afuera
The outside bathroom

Recently with some wifely nudging,  I convinced Clyde to finally install the new toilet and sink in the outside bathroom.  This will be nice to have when friends come over for outside get-togethers.  A while back I painted the walls a collage of funky colors.  We added a shower curtain and some small rugs to complete the look.

But then I realized we'd need something to hold extra toilet paper.  Being the creative type that enjoys making something out of nothing, I came up with an idea.  The body is an old plunger which holds three rolls of toilet paper.  An old coconut serves as a head that I painted, and the dress is an old curtain that I redesigned.  A colorful mop head for hair, a scrap of fabric for a scarf and some cheap trim to decorate her dress.  She holds a little sign that reads "My name is Charmenita, I'm here to help you out.  If you run out of paper, no need to scream and shout.  Pop off my head, remove my clothes and look under my dress, there you'll find a spare roll to alleviate your stress."  Although it holds three extra rolls it came out so cute that I don't want anyone to have to take it apart to get to the paper.  So I put some extra paper in a basket on the toilet tank too, which is much easier to access.  When I read the little poem to Clyde he smiled and asked "did you just come up with that?"  To which I replied, "of course."  Perhaps I missed my calling and could have made millions writing for Hallmark! 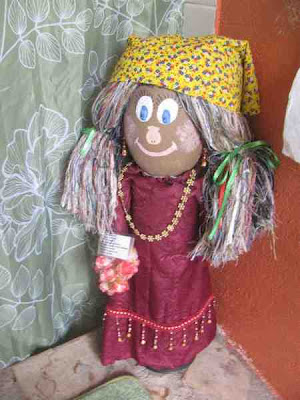 La Muñeca de papel de sanitorio
The doll of the toilet paper.  Her name is Charmen...ita, get it?
Once I get in the creative mood I keep going for a while.  After pulling out the old toilet from the outside bathroom I decided to keep the toilet seat.  Clyde gave me that strange look wondering why, and I explained that it would be cute to paint it, after sanitizing it well.  Also made a few coozies for the handles of the refrigerator to prevent rust caused by wet hands touching them.  The air is so humid here that even stainless steel rusts and must be cleaned continually. 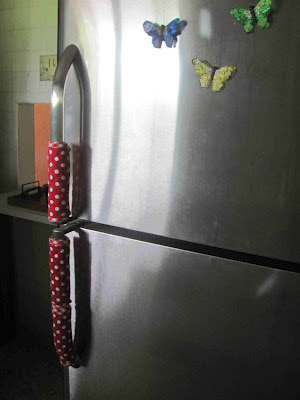 New handle covers on the fridge
with three 50 cent butterflies!
Just heard our Panamanian neighbor sneeze "ah-chew" so either they sneeze in English here or we're starting to understand much more Spanish. 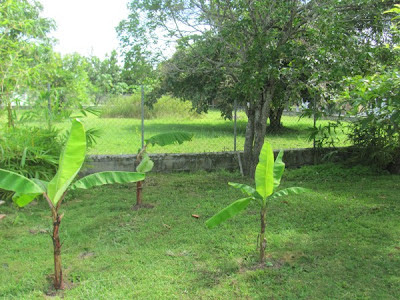 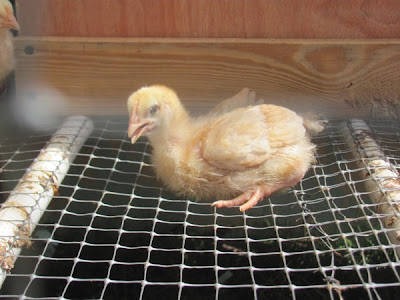 Baby Chicks are getting big! 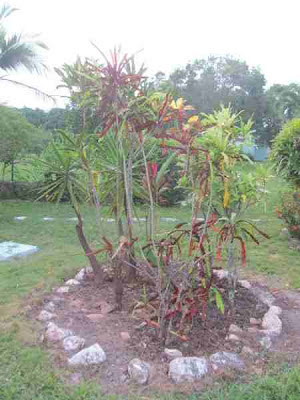 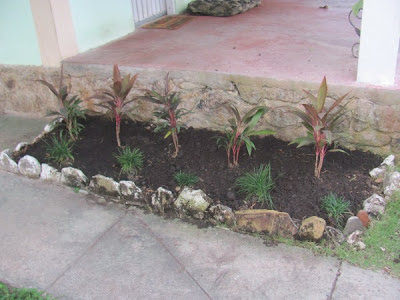 Completely Replanted this one, and each plant cost only $1.00 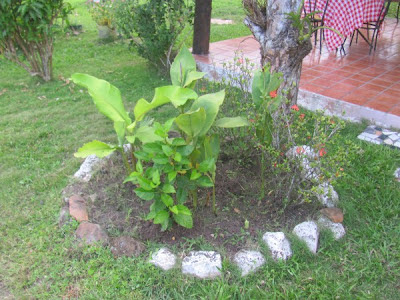 Cleaned this one up 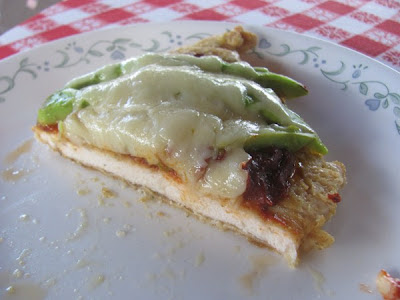 I have to admit
an incredible new recipe!
Chicken Parmesan with Avocado
Trying to introduce Venus our doberman to the chicks hoping that she makes friends with them.  She sneaks back to the coop and just sits there fascinated with them, watching them and drooling.  Not a good sign since drooling means she's hoping to eat them, not hang out with them.  Clyde yelled at her a few times today chasing her away from them.  On our morning walks she doesn't seem to care about the chickens running free in the neighborhood.  But perhaps since these chicks are in her territory she's putting her paw down and trying to dominate them.  Only time will tell and if she's still mesmerized by them we'll have to keep them penned up.
So today in Panamá it's just life as usual!  Just doing some crafting, some gardening, some cleaning and cooking as another day in paradise comes to an end....along the gringo trail.﻿
﻿
﻿
﻿
at August 28, 2012