Two lost gringos left behind a blog and all it's followers to take a vacation from retirement?  Apparently some of you have been wondering where in the world we were?  Or perhaps how come there were no wise and witty blogs to help you waste away your working hours?  Some of your wrote wanting to know if we were wasted away in Mango-reesaville or wandering the world wishfully wanting one more adventure.

Since we'd been out of the U.S. for nearly a year now, it was time to travel back and visit our family and friends.  But since our life has become an open book through this blog and other social media, we avoided posting any information for security reasons.  Obviously we didn't want the world to know that our house was being taken care of by friends and our dog, and we were out gallivanting around the world.

The first leg of our journey led us to Clifton, New Jersey for a visit with my Mom and sister Maryann. Mom's health is failing due to lung cancer and other ailments, so I thought it would be nice to celebrate her 82nd birthday with her and the family. 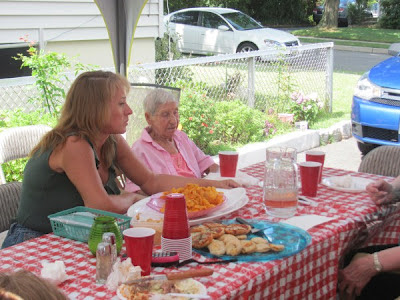 Terry and her mom 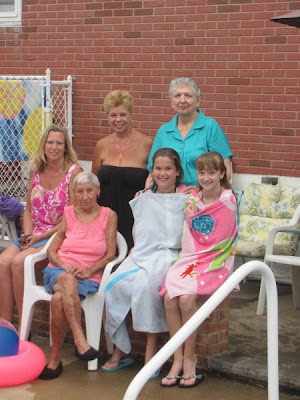 Some of Terry's family,
that is her sister Maryann
in the black dress 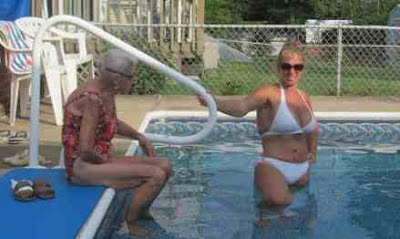 Terry and her mom Theresa
relaxing at the pool
Being so close to New York City a side trip to ground zero where the World Trade Center once stood was a must for Clyde being a retired firefighter.  We took the ferry over to NYC from Weehawken, NJ and then a bus to the WTC site.  After visiting the monument and snapping a few photos we headed out into the chaos of the city.  Since it was time for lunch we stopped for a slice of New York pizza on the roadside and bought a map for some further direction. 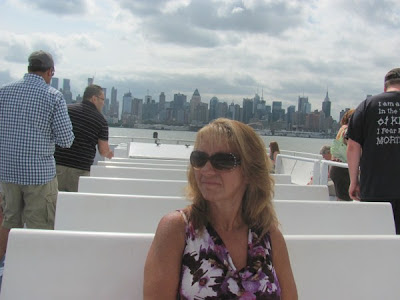 Terry on the ferry with
New York City in the background 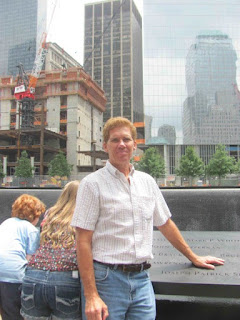 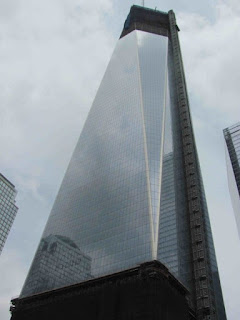 One of the new towers 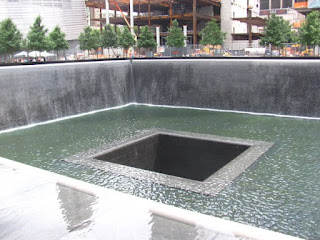 A better view of the
memorial pool
We jumped on the subway and headed over to 81st Street to visit the Museum of Natural History.  A childhood rewind for me since I remembered being there on school field trips several times.  As a child I remember being in awe of the life sized dinosaurs that towered above us in the museum halls. As an adult the museum was a maze of four stories intertwined by thousands of stairs that we walked up and down for hours.  The massive museum halls went on for miles displaying room after room of impressive life sized artifacts, dinosaurs, Indians, animals and so much more. 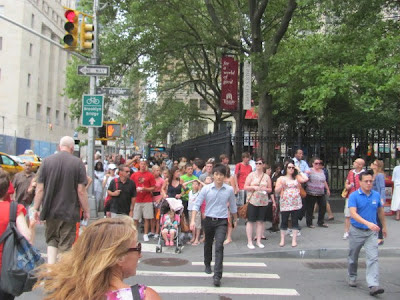 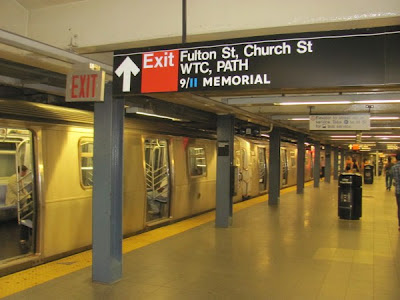 Underground in the Subway tunnel 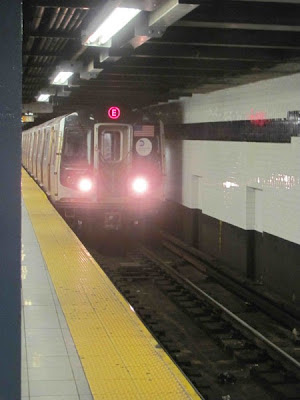 Our Subway train
coming in 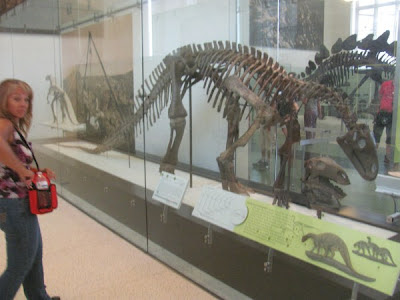 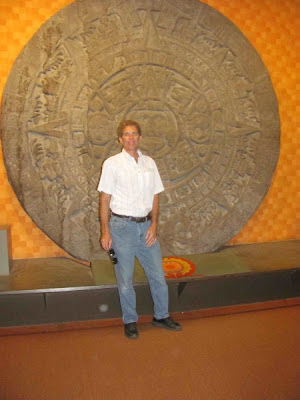 Clyde with his keen sense of direction checked the subway map so we could make our way back to the waterfront to catch the ferry back to New Jersey.  The short eight minute ferry ride offered a breathtaking view of the New York skyline that I'd taken for granted so many times while growing up. 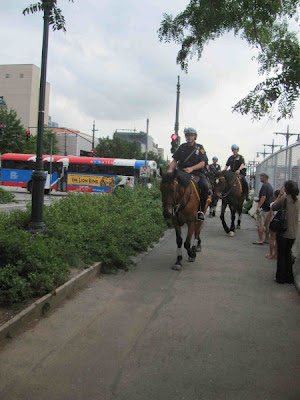 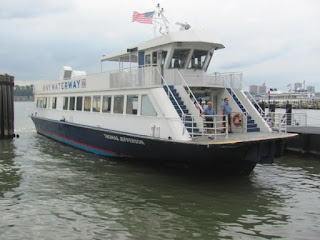 Our ferry coming to pick us up 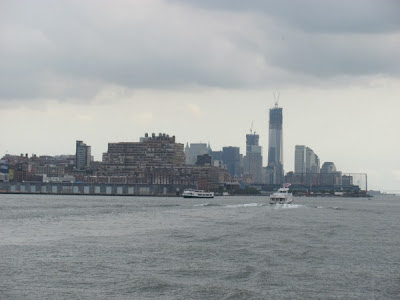 Good bye New York!
This shows the two towers still being built
Our NJ adventure included a drive around my old neighborhood as well as a few trips to visit with old friends.  A drive to Cherry Hill to visit with Tina, my first-ever girlfriend who I'd known since I was just five years old.  Another road trip to see my old high school swim team friend Lennie (short for Lenora) was another treat, as was a visit from an old boyfriend that I'd kept in touch with.

From Newark, NJ we flew into San Antonio, Texas where we managed to make the national news.  Soon after we landed the pilot announced that we could not get off the plane due to a security issue in the airport.  Minutes turned into an hour and other planes landed and sat scattered around the tarmac.  We peeked out the window and noticed security vehicles driving all around and we knew this couldn't be good.  Since we were already watching Direct TV in our seats, I changed the channel to CNN News thinking whatever was going on just might make the national news.  As the minutes turned into hours CNN broadcast a "breaking news" story that San Antonio Airport was closed due to a bomb threat.  The broadcast showed several planes sitting on the ground, including the one we were on. 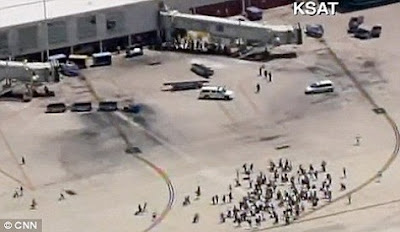 Thank God we were on the
air conditioned plane!
After three hours on the plane they let us out, only to discover that we couldn't leave the airport since it hadn't yet been cleared.  We found a restaurant and had dinner and by the time we were done they had cleared all the airport terminals.  A minor inconvenience of being stuck on the plane for three hours, but at least they kept the air conditioner running and managed to scrounge up some snacks and water to keep us happy.  The CNN segment featured passengers standing outside on the tarmac with temperatures soaring above 100 degrees.

Once in Texas, our friends Ronny and Andrea opened up their home to us as we made ourselves comfortable for the week.  Their large, lovely home is surrounded by tropical plants and fruit trees set beautifully around an in-ground pool.

During the week we visited with my daughter and grandson as well as Clyde's three children.  A trip to the beach with my 5 year old unusually neat grandson was comical.  He refused to touch the sand and told his Mom to make the sand castles so he didn't have to get dirty.  Earlier that day he used the vacuum at home, a complete opposite to my less than tidy daughter.  We also got to see some old friends and I even spent some time in the Corpus Christi Athletic Club working out with my former personal trainer and workout partner too. 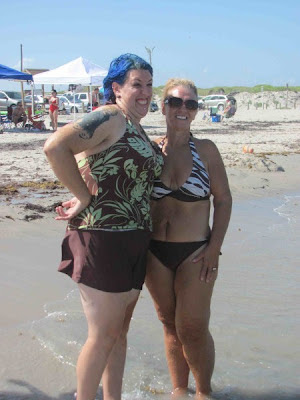 Terry and her daughter Desireé
at the beach 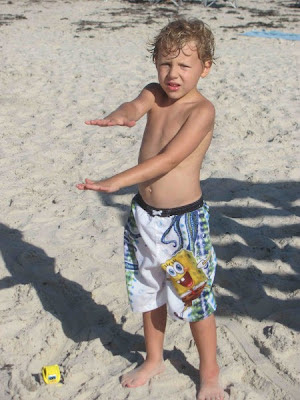 Our grandson Vash
he is five now 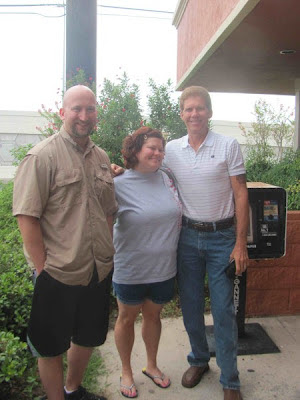 Clyde with his daughter
Christy and her husband Jerry
And the trip would not have been complete without enjoying many meals at our favorite Tex-Mex restaurants too.  We ordered our old favorite of one taco each, but didn't remember how huge the portions are compared to those here in Panamá.  With an endless supply of chips, salsa and drinks we realized why us Americans as a whole eat and drink to abundance packing on the extra pounds.
Due to the extreme heat and drought in Texas, the landscape was dry, dead, ugly, and flat and we longed for the lush, tropical greenery of Panamá. Being used to living without air conditioning, I'd become comfortable living in the heat and humidity.  The dryness of the plane, air conditioning and the dry environment caused my skin to dry up and break out.  I even woke up with a nosebleed the first morning in NJ.

Upon boarding the plane in Houston I heard a couple behind us telling a young man that they live in Ecuador.  I turned and asked if they retired to Ecuador to which they replied, "yes."  Turns out this couple is also from Corpus Christi and lived just down the street from where my daughter lives, which was literally a few blocks from where we lived.  And just like us they retired last September and were visiting Texas to deal with the sale of their house.  We exchanged emails and hope to visit them in Ecuador sometime in the near future.  In turn we would love to have them visit us here in Panamá and learn from each other about our newly adopted countries.

We arrived back in Panamá yesterday to a cool 85 degrees under cloudy skies.  Our friend Daniel picked us up at the airport and then organized a "welcome home" party for us and friends.  Dining on home-made beef enchiladas, our local friends welcomed us back with good conversation, rum and beer.

It was great to see our family and friends who we love dearly, but it was great to come home again to our life here in Panamá.  And we must admit that living with air conditioning again while on vacation spoiled us.  Today it's back to life as normal without an air conditioner and I must admit, we're sweating.  So I'm off to shock my body with a cool shower instead of the basking in the warm waters we've enjoyed recently.

We've returned to Panamá with a new found appreciation for all that we have here.  Although the U.S. has much more to offer than the tiny isthmus of Panamá, it comes with a high price.  Life in the United States is expensive, stressful and full of opportunity.  More food choices make for bigger waistlines and more health concerns.  Higher paying jobs mean bigger houses with expensive mortgages and taxes.  We Americans have come to demand more of everything and we want it NOW, no matter what the cost.

Here in Panamá we've simplified our lives in order to live on less money, and have time to make more memories.  I've always been fond of the words of this Shaker religious song:


So to answer the question "where in the world are those crazy gringos?"....We're living the simple life of early retirement, and living the dream where we chose to give up a few things to gain so much more.  That simple life of being free to be me....along the gringo trail.
at August 09, 2012