Last week I blogged about getting my first mammogram in Panamá, and yesterday we picked up the results.  Apparently the results would have been ready the next day, but when we went to pick them up the tech explained that she needed to take two more films.  Not having the opportunity to take pictures of boobs with implants too often, she forgot that two extra views were needed.  She was nice about it and apologized profusely so we just had to accept this little inconvenience. 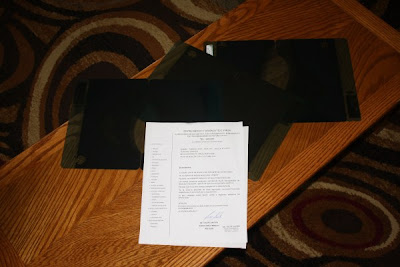 The results were packaged in a nice manilla envelope bearing the name of the clinic with my name written on top.  Inside we found a typed up interpretation of the findings along with the actual six films that were taken.  We had to chuckle at this concept.  In the U.S. of course the lab files away the films to compare to consecutive films in years to come.  I suppose we just have to hang on to the results ourselves for future reference.  But we can't complain since it only cost us $25, compared to the price of over $200 in the states.  Perhaps we can frame the pictures to enhance our home decor, which should make for some interesting comments to those visiting us....along the gringo trail.