As our six little hens began to mature, farmer Clyde noticed that three of them looked different.  They developed large combs and beards which made him wonder if perhaps they were cocks instead of hens?  With enough noisy roosters already in the neighborhood, we certainly didn't want any crowing right outside our windows all night long.  A friend suggested inviting the crowing cocks to dinner but Clyde wanted nothing to do with killing chickens.  He considered driving them to some dark, deserted road and letting them go free to live out their lives on their own.  Then he came up with another idea.

Across the street our Panamanian neighbor Victor raises chickens as a way to feed his family.  About forty chickens run freely in his front yard and Clyde has seen a feather plucking operation over yonder.  So Clyde approached Victor and asked if he'd be willing to trade two cocks for two hens to which he gladly obliged.  Clyde happily returned to our yard carrying two new adult chickens to add to our little family.  Clyde first met Victor when he came over and asked if he could take our old toilets, sinks, ceiling fans, lights and other stuff that we put out by the side of the road.  Clyde was thrilled to see them hauled off to Victors house so he didn't have to take them to the dump.  Victor seems to have a source that buys junk for money and soon realized that the new gringos in the neighborhood were pretty cool.

The pack of six chickens are now allowed to roam freely on our property, eating bugs, worms, grass and whatever else they might find along the way.  Venus our doberman has accepted her new feathered friends and seems to ignore them now, for the most part.  Although I do feel a bit like a hillbilly when I open the front door and chickens try to come into the house.  But this is Panamá and most of the locals raise chickens, so when in Panamá why not live like the locals do, chickens and all.

Clyde here:
Went out to take some pictures of the new chickens and they were pretty camera shy.  I kept chasing them all over the yard.  Pretty soon Venus joined me in the chase and had them herded up for me to catch.  Here are a few pictures of our new "Gallinas". 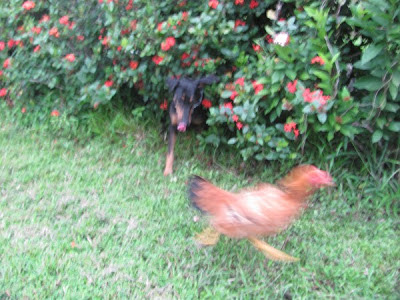 Venus and Gallina in motion! 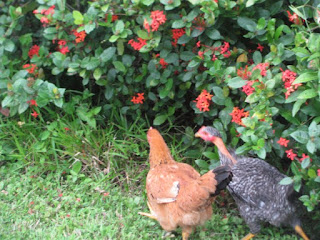 Where did that big black furry thing go? Saw some pretty horses and a colt today on our walk.  They were grazing on the hill near the road with majestic mountains in the distance. 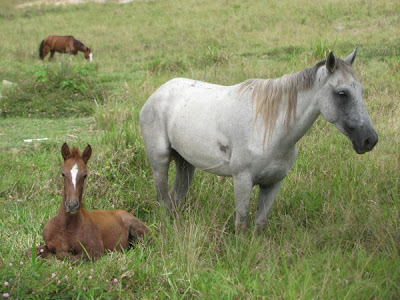 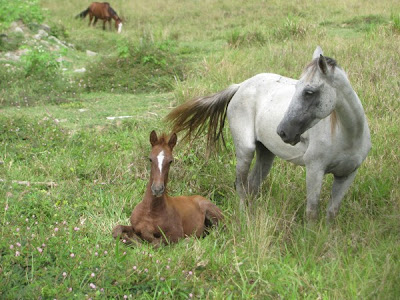 Yes Mom, she's ok.........
﻿
Breathtaking scenery, perfect year-round weather and friendly people is why we choose to call Panamá home.  Top it all off with the fact that we're able to retire here and live frugally....along the gringo trail.
at October 29, 2012