Another White Face In The Crowd......

Many of my posts tell about us being the only white face in a crowd of dark skinned Panamanians, but not this time.  On Saturday night it was different since we melted into the crowd of other pale faces in Coronado.  It was time for the CASA (Coronado Area Social Association) Christmas Bash held at a huge ballroom in the Coronado Golf complex.

With nearly 200 other gringos in attendance, the room was packed with holiday cheer.  Everyone was dressed to impress in sexy holiday dresses, gowns and even a few tuxedos for the men. The delectable buffet included beef, chicken, fish, cerviche, salads, vegetables and so much more.  After that a dessert buffet was well stocked with five or six choices of sweet treats, which all seemed to disappear from my plate.

To burn off those extra calories we danced the night away to the rock and roll sounds of Poco Loco's.  As always it was great to reconnect with friends we hadn't seen in a while and make many new ones.  Our friend Louise and her staff did an incredible job putting together this fabulous party. One of the few fundraisers that CASA does, the proceeds were used to make holiday baskets for needy families in the area.

Yesterday we spent the afternoon chatting with a Ukrainian couple from Canada, thinking of making Panamá their home someday. We're always fascinated to get to know people from other parts of the world and learn what life is like in their neck of the woods. 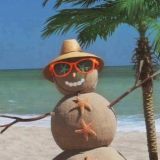 Tonight we,re having a get-together at our house for a bunch of friends.  We're baking a ham with au gratin potatoes and dinner rolls.  I already made home made chunky, cinnamon applesauce that will sit warming in a crock pot as guests arrive.  Hoping that this permeates the house with yummy smells of cinnamon and apples, so luscious around the holidays.  And since rum is drank as often as water here in Panamá, I had to make some rum balls and cookies too.  It's a potluck so everyone is bringing something to share too.  Some sangria, ron ponche (the local version of egg nog) and other adult beverages will help everyone to relax and have fun.  A white elephant swap is always a fun way to entertain a crowd and everyone gets to take home some unusual gift too. 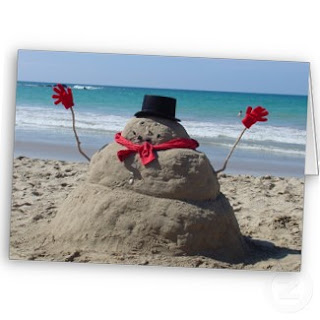 The sun is shining brightly, and the birds are chirping as the thermometer screams out 90 degrees.  Let's hope that Santa remembers to bring his speedo and surf board tonight for his midnight run around the globe.  Here in Panamá he'll be treated to rum cake, rum balls and fruit cake instead of the typical fare of cookies and milk.

Perhaps we can head to the beach tomorrow to gather some sand into balls, stack them on top of each other and add some seashells for eyes.  A tropical beachy snowman to be washed away by the warm bath like waters of the Pacific Ocean.   A little sunshine, alot of rum and everyone will have lots of fun....along the gringo trail.
at December 24, 2012