During a trip to Westland Mall yesterday when nature called, Clyde stopped to use the men's room.  After he came out he mentioned that there was a young woman in there mopping the floor as the men were standing at the urinals.  He explained that she carefully mopped in between the men, behind them and all around not paying any attention to what they were doing, or the fact that they were exposing themselves. 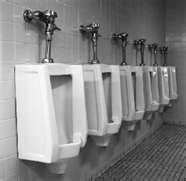 Later on in one of the stores Clyde found a few short sleeved, sport shirts that he liked and I suggested that he try them on, right there in public over the shirt he was wearing.  After all this is something we'd do in the states all the time whenever something didn't involve taking clothes off.  The sales lady quickly came over to him and in Spanish nicely told him that this wasn't allowed and showed him to the "vestidores" or fitting room.  Once inside the clerk carefully took the shirts off the hangers one at a time and handed them to Clyde.

Last time I tried blouses on in a store they were all white and the clerk told me in Spanish to make sure that I didn't get them dirty.  So I carefully tried them on being sure not to get makeup on any of them.  After deciding which one I wanted to buy as I left the fitting room I hung the unwanted ones on the rack with the others and left quickly.  I certainly didn't want the fitting room Nazi to inspect them and tell me that I'd made them dirty in any way.  Many years ago when I worked as a ladies department manager for Wal-Mart the things that came out of the fitting room were disgusting at times and had to be marked down or discarded.  So I can understand them being careful here even though the clothes are so cheap.

And in case your wondering about Clyde's shirts, he bought two that were $1.99 each and two that were $5.99 each being the big spender that he is.  And to think that he'd taken me out for Mothers Day which was celebrated here in Panamá yesterday so I could buy some shoes.  Although I did manage to find some shoes too and had to stop myself from liking too many.  I ended up with two pair of flips flops for .99 cents each, another pair for $2.99 and then two pair of wedge sandals for $12.99 each.

We thought since yesterday was a family holiday that the malls would be empty if everyone was home bonding with mama.  But instead it looked like everyone in Panamá went to the mall with mama, grandma and the rest of the family too.  The mall was packed with Christmas shoppers that even lined up to have their purchases gift wrapped too.

As we went from one store to the next we had to check in our packages at the "paqueteria" for them to hold.  Every store seems to have these things that are like locker rooms for bags.  Once our bag was placed into the square cubby the clerk handed us a number attached to a rubber band.  This can be worn around the arm or placed into a pocket and acts as a claim ticket to pick up the packages later on.  We didn't like the idea or hassle of checking in bags of purchases before, but it's easier than carrying everything and not an option here anyway.

Scenes like the one described above about the men's room just reminds us that we live in a different world here.  While shopping for groceries earlier today we had to maneuver the cart around a large, floor cleaner going by.  These things are done while the business is open and not at night like in the U.S. We've sat in medical and dental offices with a cleaning lady sweeping and mopping around us too.  It's just the way things are done here making them a little different.  I could see if Clyde had pulled down his pants to try on another while standing in the middle of the store, but a shirt over a shirt....really now!

And in most of the grocery stores here the shopping cart doesn't fit through the aisle in between the cash registers.  The cart is pushed up to the conveyor, unloaded onto the belt and the cart is then pushed back for someone to collect.  After the items are scanned the cashier passes them through to the bagger making sure that she never gets off of the chair she's sitting on.  The young male baggers pack up the purchases and place them into a different type of cart that they use to push out to the customers car.  They unload the basket and put the groceries into the car for the consumer, expecting a tip in return.  The cashiers here really do go to great lengths to not get out of their chairs and sometimes it's funny to watch.

Westland Mall was all decked out for the holidays with "ofertas" or sales everywhere.  Huge Christmas trees decorated with large ornaments were everywhere. Santas village was set up at one end while a life-sized nativity scene filled the other.  It's obvious that Christmas is in the air even though it's 90 degrees outside.  Time to pick up some "Ron Ponche" or rum punch, sing a chorus of "Feliz Navidad" and relax to the warm, tropical breezes....along the gringo trail.
at December 10, 2012