Ready For Another Adventure.....


Since it was that time of year for my annual checkup of the "female parts" I thought I'd try out a new clinic in nearby Coronado.  "Clinica de la Mujer" offers various services to women including gynocological, obstetrics, and endocrinology.  Although the girl at the front desk spoke no English the doctor did which made it easy to explain my problem.  For much of the time we've lived here in Panamá I've been bothered with female issues like itching, burning and discharge.  Like many of us I'd self diagnosis it and treat the symptoms with over the counter creams and pills.  But while in the presence of a doctor I thought I'd state my complaints and see what he came up with for a solution.  He prescribed the same type of treatment for eight days and said he'd call with the results of my pap test when they came back.  A few days later the doctor called personally and asked me to come into his office the following morning so he could explain the results.  "This can't be good," I thought, although I tried not to worry.  Clyde suggested that I call the doctor back and ask if we could come in sooner.  Since doctor's here give patients their own personal cell phone numbers, it was easy to call him without going through his office staff.

Finally we made our way into his office for the "talk."  Turns out the pap revealed abnormal cells which are "pre-cancerous" in nature and need to be dealth with.  The news was both a relief and what I expected to hear since a pap years ago showed similar findings.  Many years ago I was treated with a D&C which scraped out the bad cells and was told "these things can come back," and advised to never miss a year without having a pap done.  The latest findings also revealed inflammation of the cervix which was treated with a pill for eight days.

Faithfully every year I have gone for my lady check-up and results were ok until now.  Last January while applying for health insurance here in Pananmá, a pap was required prior to being accepted on the policy.  Apparently that pap surely must have been ok, other wise the insurance company wouldn't have offered us coverage.  My treatment options this time being older were to treat it with creams and pills for one month, then retest.  Or the other option is surgery to remove my uterus, and anything else that seemed to pose a problem.  The doctor explained that as women age there's a much greater risk of developing uterine cancer, and recommended a hysterectomy. 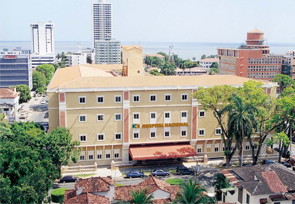 
Although we do have Panamanian health insurance here because the policy began last February 15th, the waiting period states that they will not pay for surgical procedures until after one year. We consulted with our insurance broker who said we should wait until late March to submit for pre-authorization after which the insurance company may request a second opinion. And then they still may not cover the surgery because they know that abnormal cells don't just develop overnight, and have obviously been there a while.  Apparently, health insurance companies here in Panamá don't want to cover any necessary procedures just like in the states. After all it's not like I woke up one day and said "hey, I think I'll have my uterus pulled out through an incision in my abdomen that I paid big bucks to have tightened after massive weight loss."  In my case a hysterectomy is needed to prevent the reoccurence of pre-cancerous cells that can come back and lead to uterine cancer.

So yesterday we visited with the doctor again by walking into his office and asking the girl at the front desk if we could speak to him.  An office visit here is just that....a visit with the doctor.  We sat down for a chat and explained that our insurance broker instructed us to wait until late March to begin the process for surgery.  He immediately said "that's too long, it needs to be done now."  "If you were my wife or family member I'd tell you to do it as soon as possible, " he explained, " to avoid any risk of the cells developing any further."

The doctor suggested the surgery could be done on Wednesday, February 6th at Hospital Nacional in Panama City.  We agreed and he pulled out his cell phone to call the hospital and schedule it. Then we talked numbers to see what kind of cost we'd be looking at.  The doctor explained it would be around $2,600 for his services, an anesthesiologist, a surgical assist, and an instrument person.  Another $1,300 to $1,500 would be added on for three days in the hospital and the use of  the operating room.  Our total cost would be somewhere in the neighborhood of $4,000 and we should get a discount for being pensionados but the doctor wasn't sure about that.  Compare that to surgical costs of around $30,000 and up for a hysterectomy in the U.S. with a day or less in the hospital.

The three of us sat in a tiny office with only a desk and two chairs talking to the doctor.  I asked if we could move into the exam room so he could show me just where the incision would be made.  Since the exam room was connected to his office  it was just steps away.  Not being the shy type about these things I pulled up my dress, dropped my panties and climbed up onto the exam table.  He'll make the incision in my lower abdomen and cut into an existing incision from a tummy tuck I had done eight years ago after massive weight loss.  Since I'd expressed a concern about him "messing up" my tight ab muscles he said "if I do mess them up, don't worry I'll fix them."

Today we ran over to Clinica San Fernando in Coronado so I could have some lab work done for the procedure.  The total came to around $48.00 for four different tests to be performed.  The lab tech told me that I could pick up the results on Wednesday. I explained that these were needed on Tuesday prior to surgery on Wednesday.  Then we spoke to the girl upfront who spoke English and she said we could pick them up late on Tuesday.  Confused by the different responses we left and had planned to let the doctor know since perhaps he could get them done quicker.  As luck had it Clyde was making a "retorno" or "u-turn" to go home when I spotted the doctor buying lottery tickets in front of a restaurant.  I opened the window and asked the doctor "if you win the lottery is my surgery free?"  He laughed and said "sure."  We explained about the lab tests to him and he said that he could pick them up early Wednesday morning and bring them to the hospital, so not a problem.

The doctor also told us that the hospital room will be private and Clyde will be allowed to stay with me the whole time.  Since the hospital is in Panama City which is a 90-minute drive from here my follow-up appointments will be done at the local office in Coronado.  The doctor even said after I'm home if I have any problems he'll gladly come over to our house to see me.

By the way this doctor drives a large King Ranch Edition Ford pick up truck.  The famous "King Ranch" is in Kingsville, Texas about 45-minutes from where we used to live.  This ranch is one of the largest, continual working cattle ranches in the world.  We asked the doctor if he bought the truck here and he said  "no,  he went to San Antonio, TX to pick it up."  Clyde grew up in San Antonio and he and I spent lots of time there since it was only a 2 -3 hour drive from Corpus Christi.

So we're about to have another adventure here in Panamá.  The good news is that every gringo that we've talked to that's been hospitalized here said the experience was wonderful and the care was great.  Some didn't even want to leave the hospital and asked to stay longer.  When have you ever heard someone say that about a hospital in the U.S.? Don't know when I'll feel up to blogging about it though but stay tuned for our first hospital experience   ....along the gringo trail.
at February 02, 2013