Today began like all other days with me getting ready in the usual way.  But when I brushed and flossed my teeth my temporary crown popped off.  Back in Panama I had undergone a route canal procedure during the past month.  Out of the three canals in the molar the dentist was only able to locate two of them because the third one was calcified.  It was because of this that he suggested we leave the temporary or provisional crown in place for a month or two before putting on the final one. When I asked he said it was perfectly fine to brush and floss the provisional crown, however it was during flossing today that it came undone.

So we left the house and off we went trying to find a dentist that could see me here in Ajijic, Mexico. Over the past week here we had noticed many dental and doctors offices so I knew we'd have no trouble finding one.  We stopped into "Ajijic Dental" located on the main carretera or roadway through the village. Immediately we were greeted by an attractive, young Mexican women with a bubby personality and big white smile.  She wore a dress under a white lab coat which her long dark curly hair fell over like a water fall. She introduced herself by name and said that she was the dentist's assistant.  I inquired if there was a dentist in the office and explained my dilemma.  She spoke a little bit of English but seemed to understand what I was telling her.

Since there were no other patients in the office she quickly escorted me into an exam room and got me settled into a chair.  I was draped with a napkin around my neck and another one clipped to the front for extra protection  She even put a pillow under my neck as she asked me to lay back in the chair. Once I was reclined she spread Vaseline over my lips, apparently preventing them from drying out?

A few minutes later an attractive women dressed in maroon scrubs approached the side of the chair.  She had brown hair with reddish streaks added to it, was probably in her early 40's with a full face of makeup. She wore a white lab coat too which gave her a professional and clean look.  I asked if she was the dentist and she said, "yes."  She spoke fluent English and I began to explain my problem to her.  The assistant set out all of the supplies that the dentist might need to take care of my crown.

The dentist was efficient, professional and very pleasant to be around as she re-cemented my crown making sure it fit properly with the rest of my bite. While I was there I also told her about another issue I was having in my mouth.  On the bottom of my mouth I wear a partial plate that I've had for many years.  For the past few weeks I've had some irritation underneath the plate causing terrible pain.  While back in Panama I went in search of Anbesol or other topical numbing agent but there was none to be found. Eventually I asked our Spanish teacher and she gave us the name of something used for teething babies called Chicodent. While it did have numbing qualities it still didn't solve the issue of my gum irritation and I knew I needed to see a dentist.

The dentist said she could file down the partial to change the shape a bit which would take pressure off the sore spot.  She disappeared to another room and the dental assistant approached me from behind the chair at the top of my head.  "Poquito masaje," she said as she proceeded to massage my face.  Her fingers moved in a continual tapping motion from my forehead, to my temples, cheeks and chin causing me to spontaneously relax, whether I wanted to or not. It happened so fast and caught me by surprise that I didn't have time to object even if I had wanted to.

The dentist walked in and said, "here try this to see if it's better," as she handed me the partial.  It literally took me a minute or so to react as I was in a state of pure relaxation from the facial. The dentist wasn't happy with the results and left again to reshape it some more. The assistant continued with the facial massage bringing me into an even more relaxed state of consciousness.  I just had to ask, "so did you learn how to do this massage in dental assistant school?"  She said, "yes."

There were several more fittings by the dentist until she was satisfied with the results of the fitting.  She suggested also that I rinse my mouth with baking soda and water which would change the PH of my mouth causing it to heal faster.

After that we picked up some more coffee from a local roadside stand which we dropped off at the house.  The home owner's maid comes on Thursday at 1pm so we intended to stay out of the house so she could clean. We headed over toward the gringo plaza as we call it since the restaurants there seem to cater to the foreigners.

Along the way on a side street we spotted a rather east Indian looking man standing outside of a restaurant.  Clyde asked him what kind of food they had and he explained.  Before long we were seated in the lovely court yard looking at the menu.  We each choose an order of chicken enchiladas swiss that came with rice and beans.  Before the meal arrived we were served chips and a selection of salsas.  One salsa was green and the milder of the two, the other was red and hot.  The meal was huge consisting of 4 enchiladas covered in a green sauce topped with a white cheese. Along side it was white rice with some veggies mixed in.  The other side of the platter held a tiny bowl formed from a small tortilla.  The decorative bowl was used to hold black refried beans that were smothered with more white cheese. The little bowl was garnished with a red pepper. 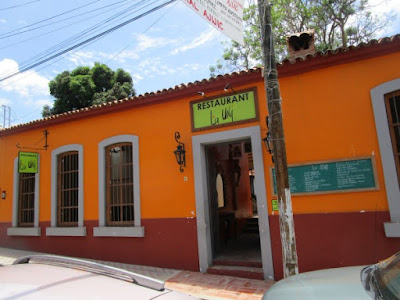 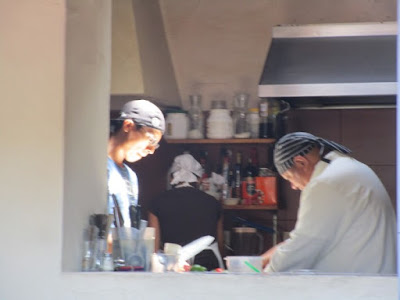 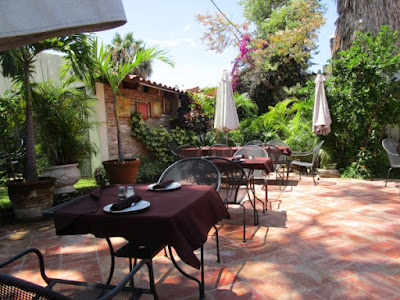 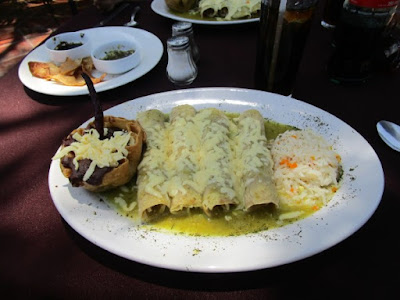 Our Lunch.....Green Chicken Enchiladas With Rice And Beans
﻿ 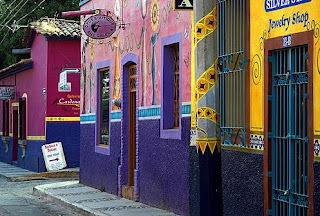 Colorful Neighborhoods Near The Restaurant


Stuffed from a huge meal we decided to take a walk along the malecon.  The malecon of Ajijic is a paved walkway that runs alongside Lake Chapala.  It follows lots of green space, gardens, a playground, skate board park and other public spaces for all to enjoy.  As usual the weather was just perfect, sunny in the 70's and a bit cooler in the shade. We stopped to use the banos at one point for a cost of $3 pesos each, or just 18 cents each. After Clyde paid our fees the male attendant allowed me to choose my wad of toilet paper that was sitting in a plastic container. Another attendant apparently was listening that I was finished.  He walked into the ladies room and offered me "jabon," or soap to wash my hands with.  I suppose as funny as this whole thing is at least they provide paper here, another thing not often seen in Panama. 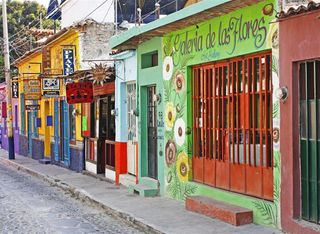 More Shops Along The Way 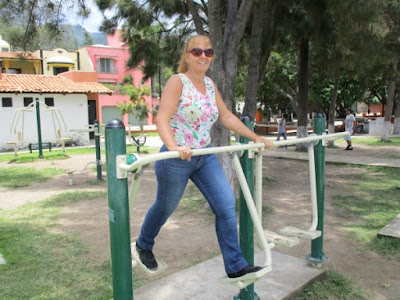 An Outdoor Gym Near The Lake Front 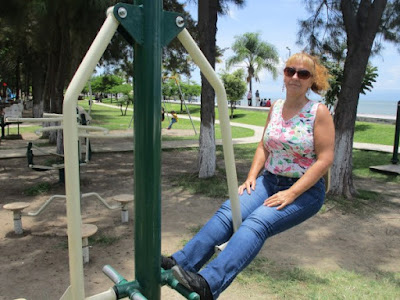 A Type Of Leg Press


Once we had enough of walking we stopped for a cup of coffee at a nearby café that also caters to gringos. The waiters spoke fluent English as we ordered two cups of café con leche.  After we drank one cup we were offered another, something that never happens in Panama.  Refills in Panama are never free.  The total for two cups of coffee here in Mexico.....just  $25 pesos or $1.86.

Last night we found a place called "La Nueva Posada," to enjoy dinner. As the name suggests "la nueva posada," or "new inn or hotel," features a lovely hotel attached to a huge restaurant.  Clyde and I were the only people inside the restaurant while several tables of gringos sat outside.  Just then another gringo approached us and asked, "are you new here?"  We explained that yes we were new and just visiting the area.  He invited us to join the group that meets every Wednesday just to socialize. Drinks during the event were a two for one offer so we quickly moved to join the others. 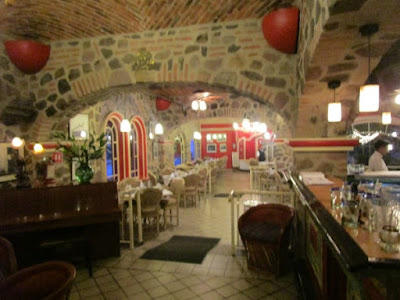 
The crowd was much older than us, most were late 70's or 80's but all very friendly and welcoming.  As the night went on we learned the stories of many of the retirees who moved to Mexico for a more affordable way of life.  Some had been here for 10 years or more, owned property and told us of their adventures of living in Mexico. The restaurant was just lovely with elegant décor, white table cloths, cloth napkins and very attentive wait staff.  Surely a meal here would cost of a fortune?  Clyde and I ordered the same thing off the menu.  We each had a ground sirloin steak that was topped with grilled onions along side mashed potatoes and mix veggies.  It was served with a crusty dinner roll and butter. The price was $85 pesos which converts to just $5.27 each. During the two for one drink hour we each had a coke for a cost of just 75 cents for both.  We chatted for hours with this group of Mex-pats comparing life in Mexico to our life in Panama. 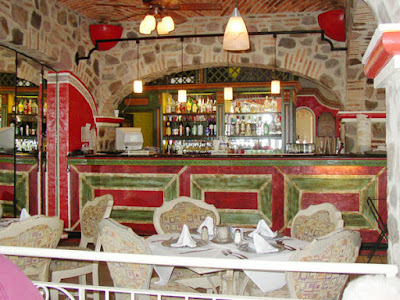 
Some of the benefits they told us about were as follows:  they can see an English speaking doctor for around $5. A dental cleaning is around $10.   A man told us about having prostate surgery with two days in the hospital for around $3000.  Trash pickup here is free, and they really do pick it up, we've seen that for sure. Property taxes run between $50 and $200 per year for most people.  Water is not drinkable so most people install water systems and water softeners.  Many homes install solar panels to save on electric costs since rates are high here.  Eating out here costs less than eating at home.  The bus system is efficient and cheap.  A cheap $3 trip to Guadalajara is a monthly trip for many expats for shopping.  The big city has malls and large warehouse clubs where foreigners can find everything they're looking for. And this area of Mexico truly does have the most perfect weather in the world.  There is no need for either a/c or heating since the temperatures remain spring like year round. 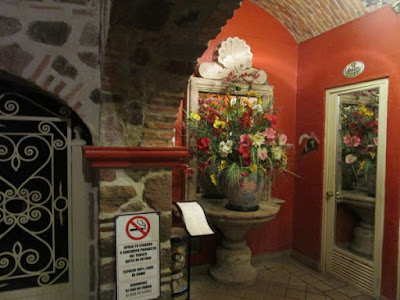 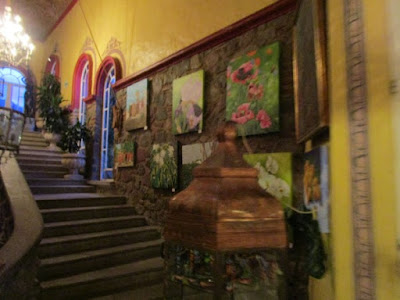 Stairs Up To Hotel Rooms 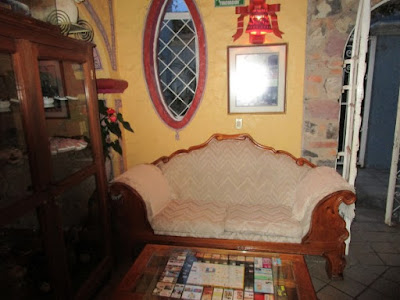 Lobby Of Hotel And Restaurant


How exciting to meet a whole different group of expats who did the same thing we did just to another country.  And what fun to be able to compare notes, stories and adventures of life in Mexico vs. life in Panama.......along the gringo trail.
at July 23, 2015