The Taste Of Travel In Ecuador...

Part of the fun when traveling is tasting the culture wherever we are.  We've eaten pasta in Italy, macarons in Paris, Turkish delights in Turkey and turtle eggs in Panama just to name a few. And now that we've been to Ecuador we can add "cuy" to that list.  Cuy (coo-eee)  better known to the English speaking world as guinea pig is a favorite among Ecuadorians.  Yes it's those same furry little critters we had as pets when we were kids that are enjoyed here mostly on special occasions since the little suckers are rather pricey. But it was something exotic that Clyde wanted to try and yesterday was the day. 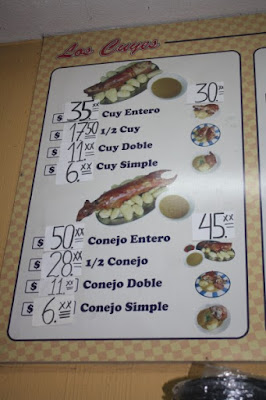 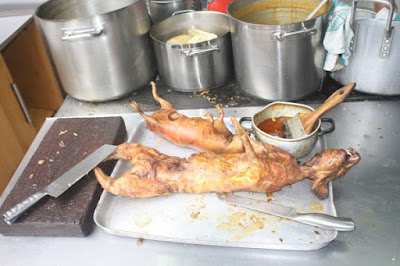 Cuy And Rabbit Belly Up 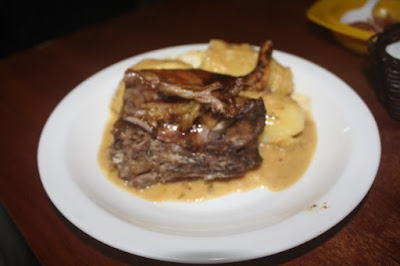 Piece Of Cuy And Potatoes 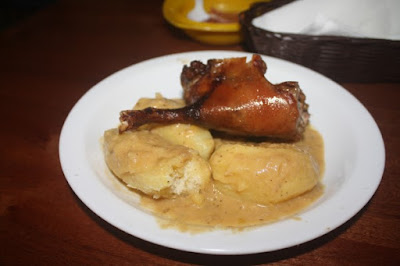 Another Look.... And They Gave Us A Tablespoon To Eat With 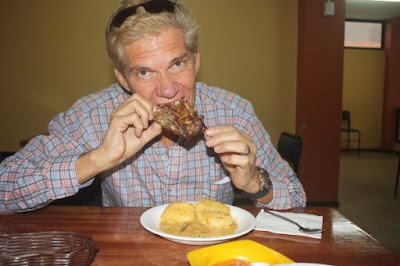 Proof That He Ate It
﻿

Sometime in the afternoon we headed over to the Museo De Ciencias Naturales (Natural Science Museum) here in Ambato.  While the website said the entry fee was $2 for some reason we got in for free.  The women at the front desk needed to see and hold onto our passports while we toured the museum but said there was no cost to enter.

While the museum isn't all that big it is packed with things to see. Plenty of animals that once were alive are on display along with as assortment of indigenous artifacts, butterflies and bugs, reptiles, money and more. We were actually impressed and took our time roaming around before we'd had enough. 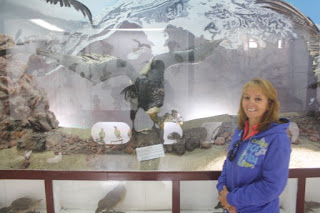 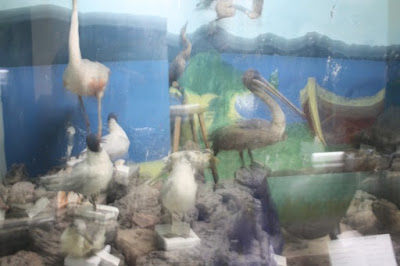 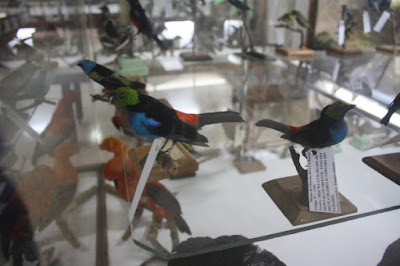 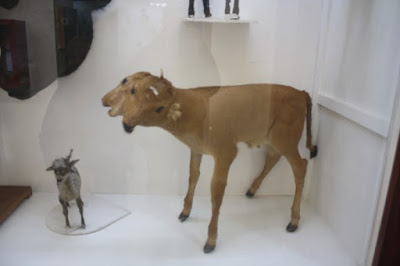 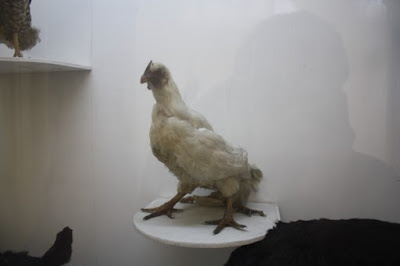 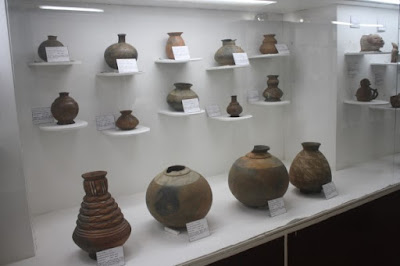 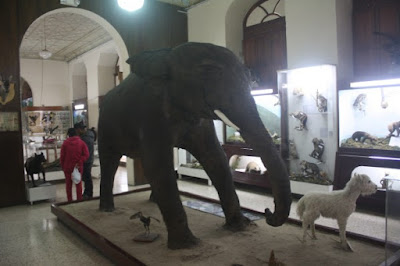 Since it was a bright sunny day we walked around the streets taking in the sights and people watching once again.  Since it was almost dinner time we thought it was the perfect time to sample some cuy and walked around looking for a place with it on the menu.  Cuy seems to be a specialty here and not many restaurants serve it, but those that do advertise it big.  Our search on foot led us no where so we asked a taxi driver if he knew of a place that served it and he said, "sure."  So we hopped in and he took us there. A while later we stood in front of a place called, "Los Cuyes."  There in the open air was a barbeque with women cooking.  Lying belly up were cuy and conejo (rabbit), another specialty of the house.  Once inside we found a table and looked at the menu.  Cuy prices went from $35 for a whole guinea pig to $6 for a simple plate.  Since we didn't know if we'd like it we ordered the $6 plate which was served with three boiled potatoes in a gravy and a tablespoon to use for eating. It's rather funny that restaurants give customers a tablespoon to eat with when there's no soup as part of the meal.

I poked at the cuy trying to figure out how to eat it since the outer skin was hard and almost felt like a shell. Clyde was already chomping on his piece and I asked him to help pull the meat off mine. He told me how to pick it up and bite into it and my first through was, "this is disgusting." The little bit of meat on it was tough and not something I could bite into, and the whole thing looked black and nasty.  I decided I'd eat potatoes for dinner and pretty much gave up on the cuy.  Clyde gave me a piece from his so I could at least try the meat which I did.  Of course it tasted like a tough piece of chicken and we each literally only had a few small bites of the stuff on our pieces. Clyde didn't even like the potatoes but I did eat some of mine before we paid our bill and got out of there.  Down the street was a small restaurant where we stopped for ice cream since we hadn't eaten much. We were satisfied that we tried cuy and know it's not something probably we'll ever eat again.

Down the street from our house sit apartment we noticed some carnival rides being set up and went to check it out.  Turns out it's a huge fair called, "Feria de Finados," which translates to, "Fair of the Deceased." This weekend many Latin American countries celebrate something called, "Day of the Dead," or "Day of the Deceased," here in Ecuador.  It's a sad but festive time for families to remember loved ones that have passed.  Here in Ecuador a colorful beverage called, "colada morada," is served to commemorate the blood of those that have died.  It's made from black corn and mixed fruits such as blackberries and blueberries that give it its color and it's sweetened with cane sugar called , "panela." This drink is traditionally served alongside bread shaped like kids called, "guaguas de pan," which is in remembrance of kids that have passed away. The street fair was filled with food vendors peddling all kinds of stuff so we just had to try some.  We had a colada morada with bunuelos or fried dough balls served with a slice of soft white cheese and topped with honey.

Today is our last day in Ambato as we're currently waiting for our hosts to return. From here we're off to Quito for a few days and one day in Cotacochi to see friends old and new. Last night the Cotapaxi Volcano was nice enough to poke out it's mysterious head.  As sunset on Ambato we sat in the park taking pics and watching Jethro run around for one of the last times. We've had a wonderful time here in Ambato and thank our hosts for giving us this opportunity.

Travel involves all of our senses and we'd certainly be missing something if we didn't taste a bit of each place we go.....along the gringo trail.