Frustrations Of Living In Europe......Siesta

There we were strolling around the tiny little town of Novelda, Spain today when our tummies began to growl that all too familiar call for food. We were there to explore the Saturday market full of Spaniards taking advantage of "discuentos" on clothing, food, produce and more. But it was only 1pm and here in Spain they don't even begin to think about eating lunch until 2, with any luck. But we knew that first we had to find an open restaurant, then a place to park before we could find any grub to eat. Being Saturday most of the businesses in the little town were shut tight. Those few that were open and looked like restaurants offered no place to park for miles. Finally with no options left we drove into the parking lot of a small grocery store where we picked up some sliced cheese, a package of crackers and an apple along with some drinks. Beyond hungry we sat inside the car enjoying our tiny bit of lunch watching the locals buzz by with their shopping carts. 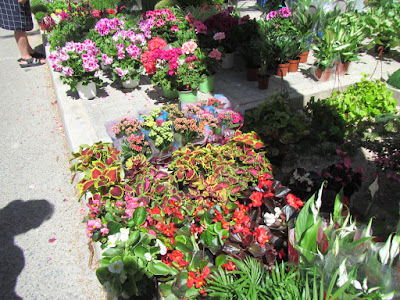 Flowers At The Market 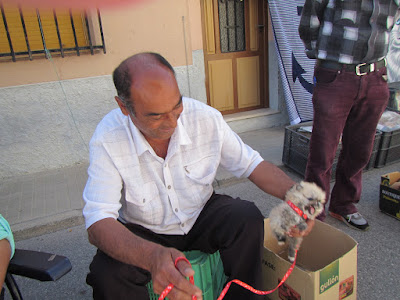 An Itsy Bitsy But Mean Dog 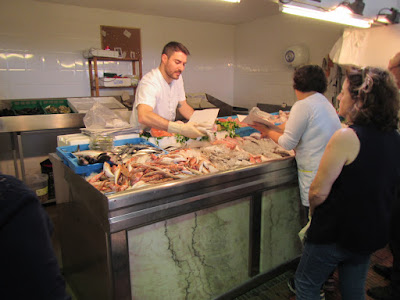 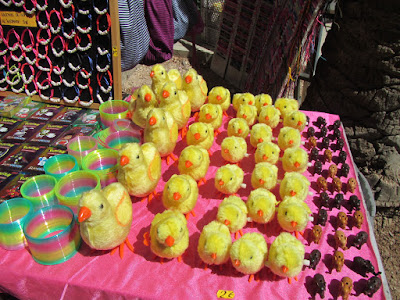 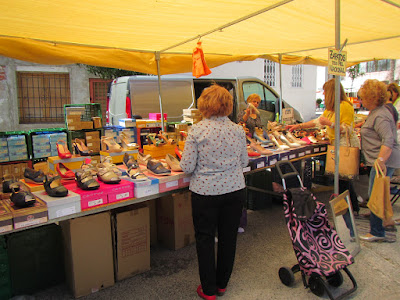 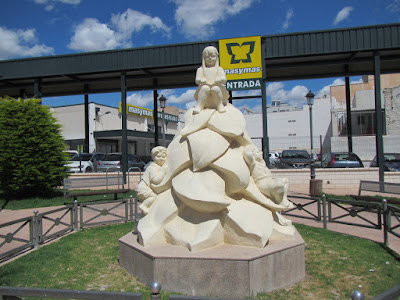 Strange Statue Out Of Marble 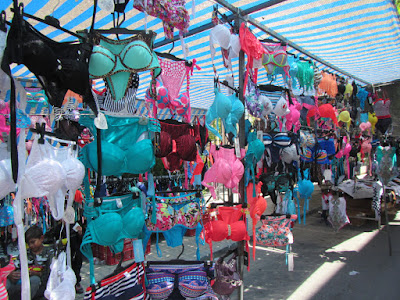 
Next we made our way to Santuario de Santa Maria Magdalena, a little gem that sits perched high atop a hillside overlooking the town. This church was designed by an apprentice of the more famous architect Antoni Gaudi who brought the city of Barcelona to fame from his buildings there.  We climbed the hill to the top expecting to enter the ornate building when I noticed the sign that indicated the church was closed for THREE hours, apparently for siesta? I guess here in Spain even God takes a mid-day rest? Located next to the church is Castillo de la Mola, a unique looking castle that was also closed for lunch. 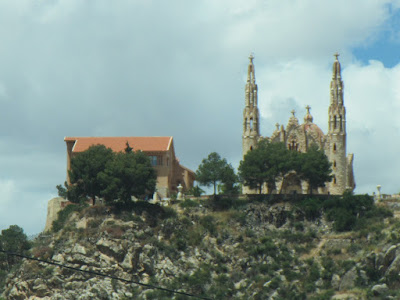 Heading Up To The Church 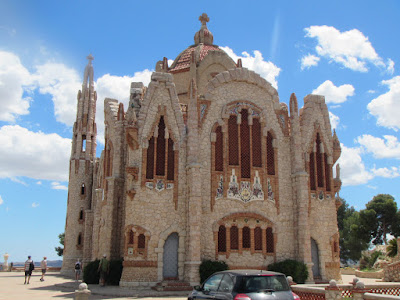 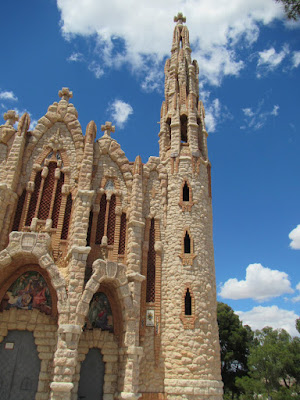 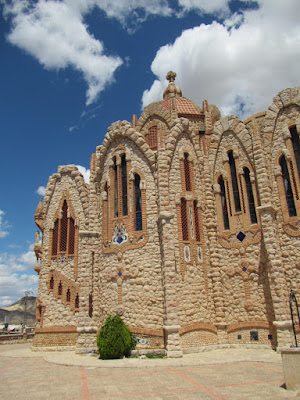 It's not just Spain that closes during the mid-day since we saw the same exact thing while house sitting through Italy. Other countries in Europe probably follow suit closing during the busy time of day when one thinks that they should be open. I recall one day in Italy when I was sick and had to visit a doctor. We stopped by the pharmacy for medication and to rent a nebulizer for breathing treatments only to discover we'd have to return in THREE hours when they reopened.  Although this IS frustrating there's absolutely nothing we can do IF we want to explore Europe.

But lo and behold, right next to the church and castle was an upscale restaurant that WAS open and all too willing to take money from tourists. We sat there taking in the lovely views of the mountainside while enjoying a diet soda for me and a beer for Clyde. The total for a beer and soda complete with a glass of ice was a mere 2.40 euros. A bargain for sure! 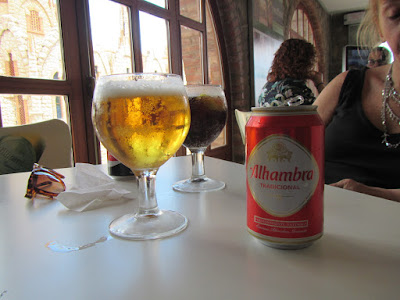 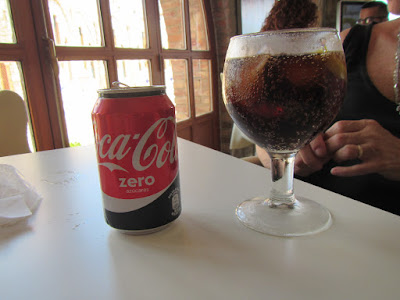 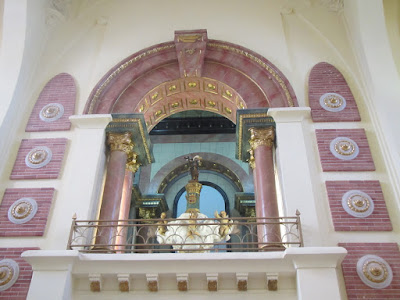 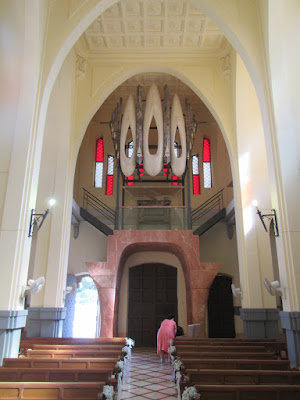 Organ Carved From Marble, Only One Like It In The World 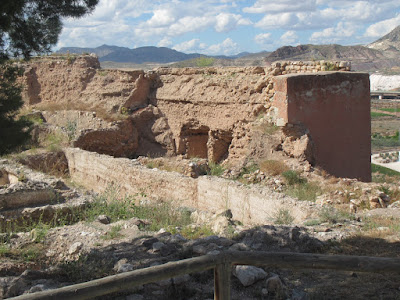 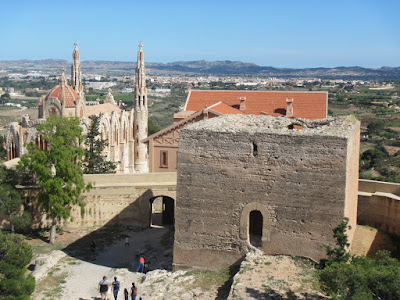 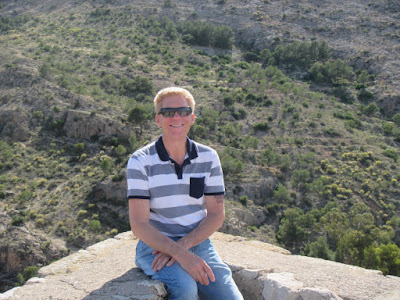 Since we still had an hour left before getting into the church Clyde opted to drive around the countryside some more. We saw mountains of granite and marble as we passed by quarry after quarry along the road. Known as the Spanish Capital of Marble, Novelda and this whole area is full of quarries.

Spain is still one of the few places in the world where someone can work as a shepherd, moving sheep and goats BY FOOT from one area to another. There are even schools here that teach the lost art to modern students looking to escape the rat race and live a different life. Today as we drove the country roads we passed by herders tending to hoards of sheep and goats, parading one after the other into the next field. 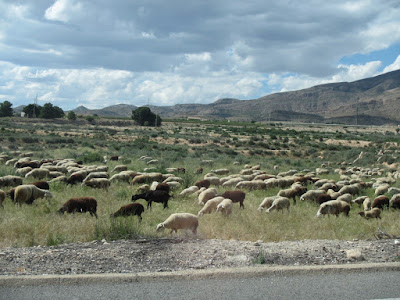 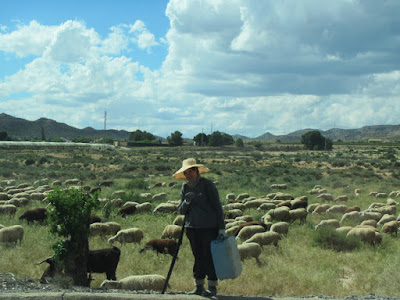 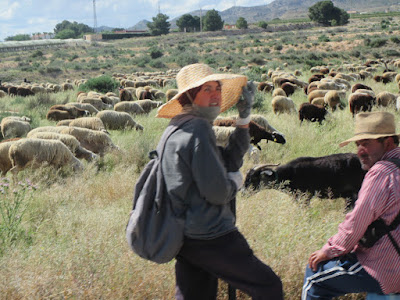 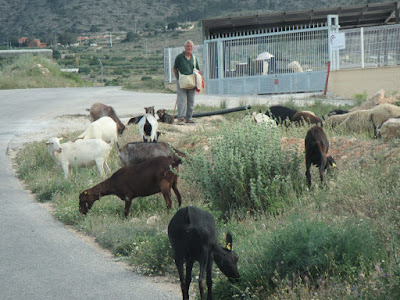 Saw Another Bunch Down The Road With Different Herder

We are enjoying a simple life here, away from the hustle and bustle of the city. Our temporary home is surrounded by rugged mountains, quarries of natural stone, and cactus that grows among the white soil. And we are happy to report that after ELEVEN months of NOT speaking Spanish like we had to while living in Panama, that we DO remember much of it and are doing well communicating to the Spaniards......along the gringo trail.