On Monday we left the green, lushness and cold of Ireland and headed to sunny, warm, dry Spain for our next house sitting adventures. The landscape outside our window these days is that of desert, cactus, palm trees and rugged mountains surrounded by warm days and cool nights. 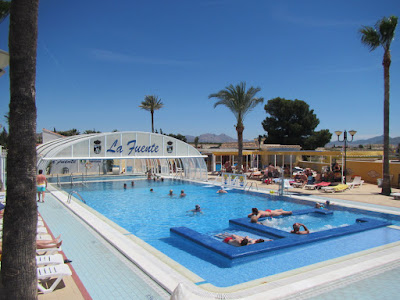 
Since we spent a few days with the homeowners still in residence they showed us around their lovely area and suggested that we all spend a relaxing day at a thermal spa. For the price of just 7 euros for the whole day we enjoyed the warm waters of crystal clear pools of hot water at the thermal baths. When it was time for lunch, between 2-3pm here in Spain, they took us to their favorite restaurant to partake of the "Menu del Dia." Our meal included a choice of a starter, main course, dessert, bread, salad, wine, tapas, coffee and a cordial ALL for just 9 euros each! My meal began with salad, bread, some fried cheese sticks, soup with a meatball in it, fish and fries, plenty of wine mixed with fizzy water, dessert and some good strong Spanish coffee. 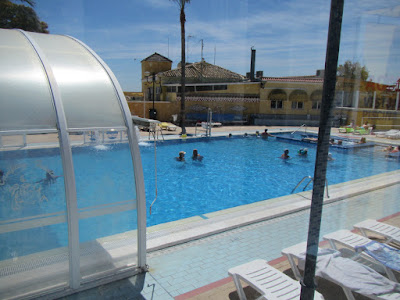 After lunch we all went back to the spa for a relaxing afternoon that lasted into early evening. Later that evening we stopped for a quick dinner out. Clyde and I shared a meal of salad, bread, chicken, fries, dessert, coffee and drinks for just 10 euros for the two of us.

Yesterday Clyde and I took off on our own to explore the Mediterranean Coast not too far from the house. While house sitting through the UK we stumbled upon the British comedy called, "Benidorm," and became hooked on it. The Brit-Com follows a group of vacationers from England who holiday each year at an all inclusive resort in Benidorm, Spain. While they complain about the 3-star resort they can't help but return every year since the rates are so cheap. 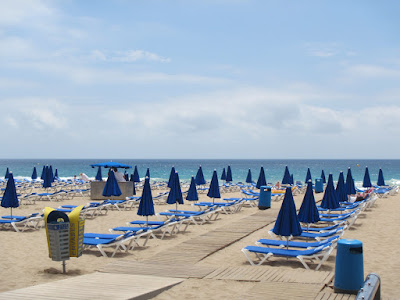 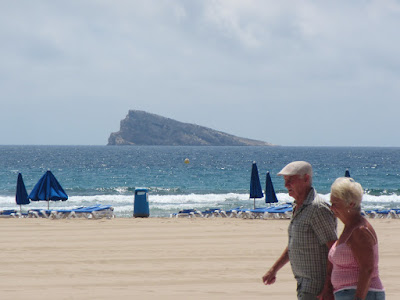 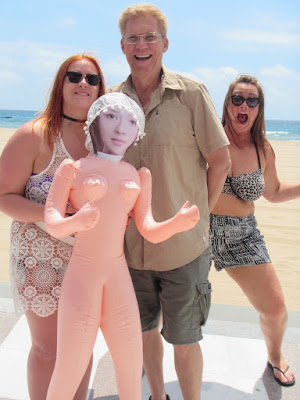 Clyde Makes Friends Everywhere!
And What Happens In Benidorm....Stays In Benidorm
Apparently This Was A Bachelorette Party And The Blow Up Doll Was Their Hen 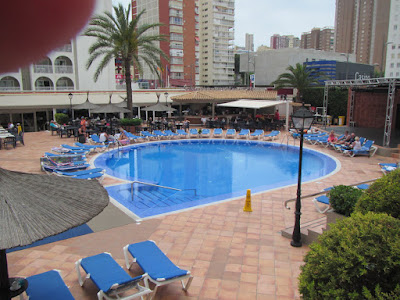 The British Comedy, "Benidorm" is Filmed At These Two Sister Hotels 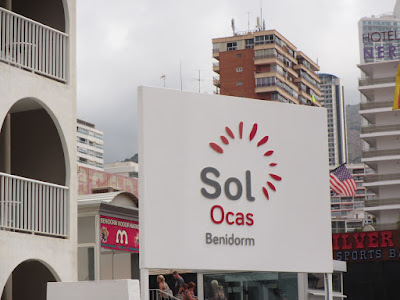 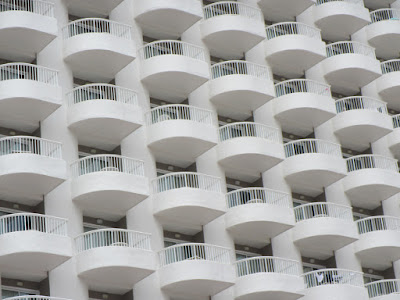 For the next few weeks we binge watched the whole EIGHT seasons of the award-winning, #1 show in the whole United Kingdom until we were caught up. Just recently we finished watching Season 9 and Season 10 is being filmed NOW.  Well....since we have become obsessed with the show Benidorm and we are just an hour from the city of Benidorm here at this house sit, we HAD to go see the place. 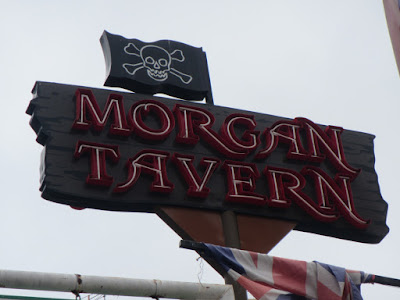 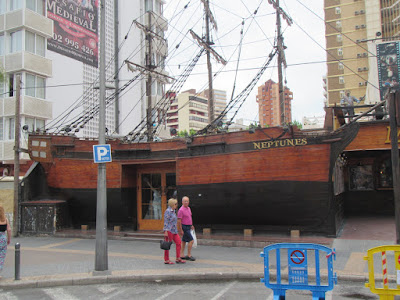 Another Filming Site Is Neptune's Bar 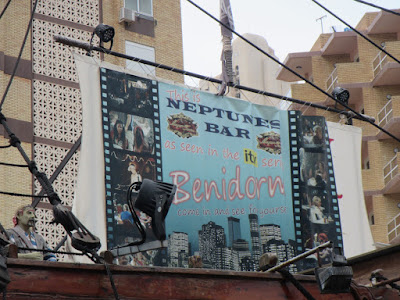 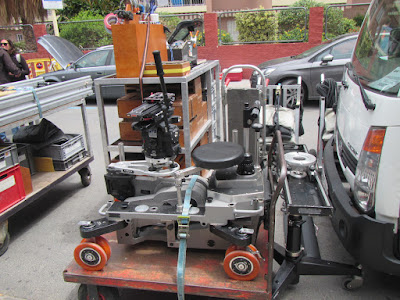 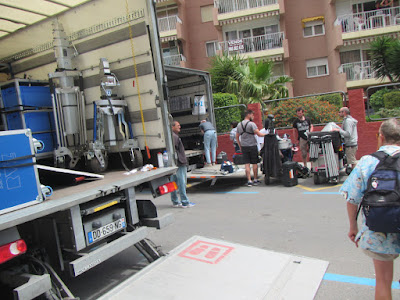 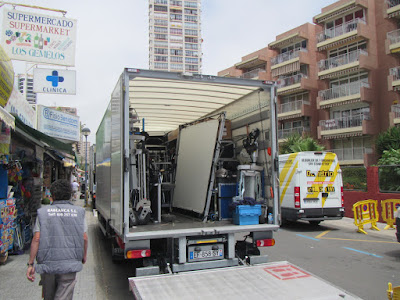 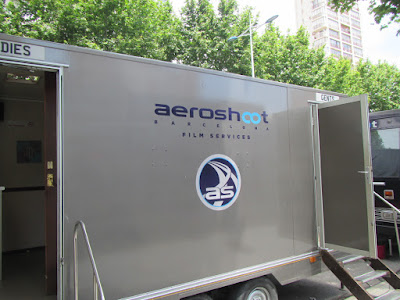 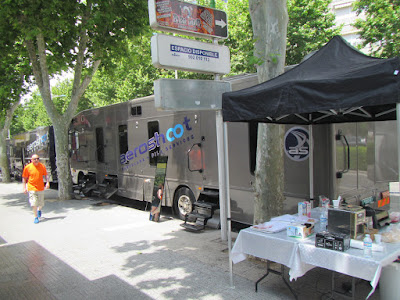 On The Left....Wardrobe Truck With Dressing Rooms And A Mirror Outside
Hair and Makeup Facilities Inside, To The Right A Food Table Was Set Up For Cast 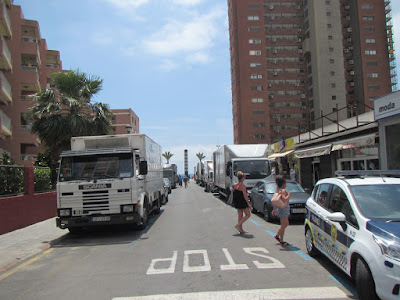 Like silly kids we drove into the beach side city and snickered when we saw actual trucks of film crew parked everywhere. Although we didn't manage to see any actors walking about, we did see wardrobe trucks, food trucks, dressing rooms, props, grips and so much more. 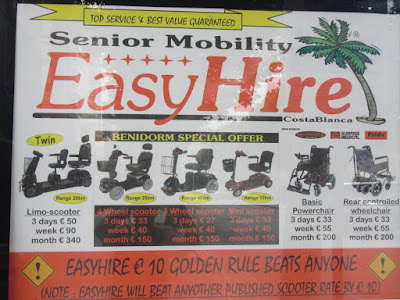 Why Walk On Holiday? Easy and Cheap To Rent Motorized Carts For ALL!
The Joke On The Show Is That Everyone In Benidorm Uses These And Now We Know....
It's True! 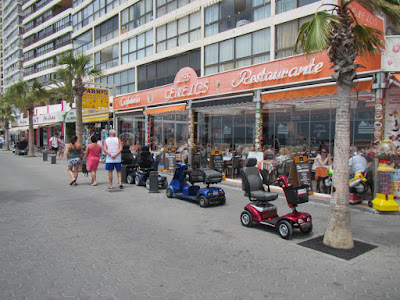 These Carts Were Everywhere With Fully Able Bodied People Renting Them 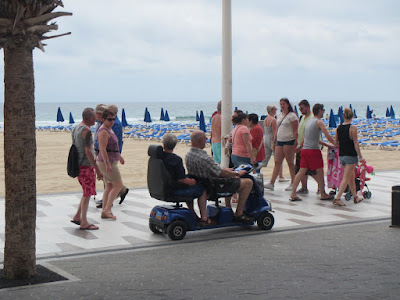 Even Made For TWO! 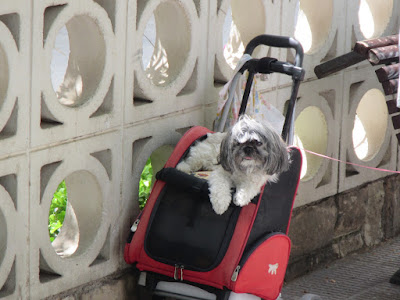 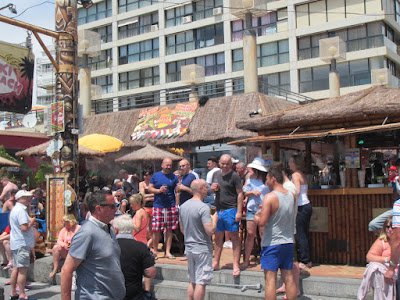 
We will return to see more of the lively city and enjoy the gorgeous beach and waters of the Mediterranean Sea soon. But for now we will get settled into our temporary home, enjoy the warmth and beauty of Spain and take you with us on our journey.....along the gringo trail.