Belgium, The Netherlands, and Germany.....Oh My!

Our first few days in this part of the world has been full of dog walking, cuddles, belly rubs and exploring our new surroundings. We checked off another country from our list of must-see's when we crossed over into the Netherlands. The city of Maastricht, located on the southern tip of the Netherlands is known for it's medieval architecture, cobble stoned streets, and vibrant cultural scene. Touching on both the borders of Germany and Belgium, Maastricht is easy accessible from several countries.  We walked around taking in the sights, sounds, smells and tastes of this Dutch wonderland. 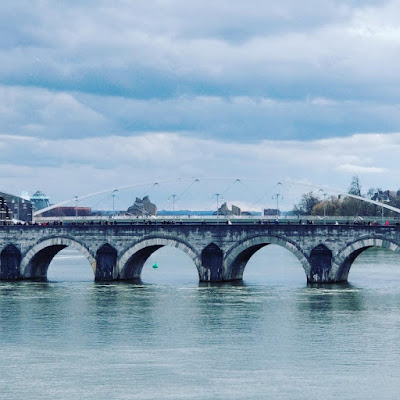 First Glimpse Of the Netherlands in Maastricht 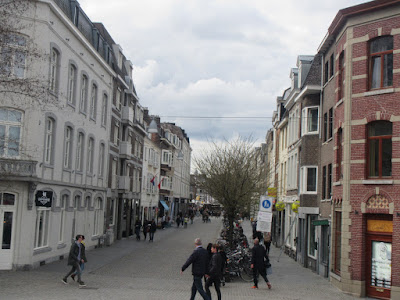 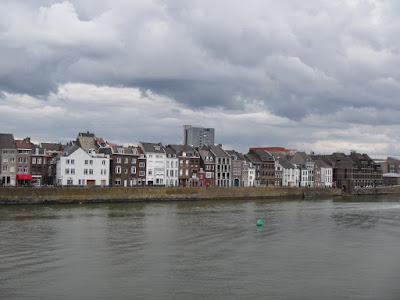 The next day we stayed close to our temporary home and visited the town of Herve again. Every year for the past 142 years, the town of Herve has hosted its annual Cavalcade event featuring parades, music, merriment, food, fireworks and more. Tied in with Easter and Spring Break, it's a nice few days out for local families to spend together. Being that we do not speak the local language of French, we felt it was safe to go just to watch the parade. Elaborately decorated floats were pulled by massive, gorgeous work horses with music to entertain the crowds. Participants threw out tons of candy to attendees along with cheese, since the area is famous for that. We always enjoy mingling with the locals and getting a peek into their culture and lives in our travels around the world. 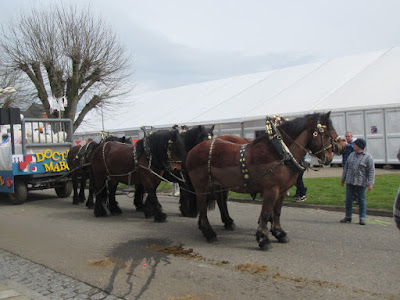 Beautiful Horses in the Parade 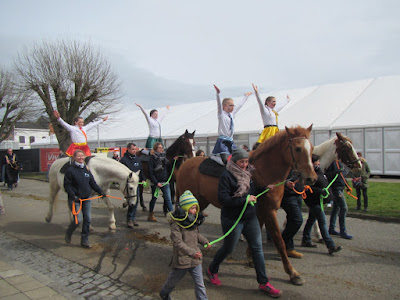 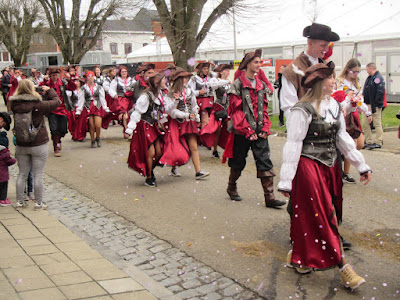 After a day of rest for grocery shopping, laundry and boring stuff like that the next day we were off again to see what else we could find. Crossing the border once again we visited the picturesque, village of Monschau, Germany. This well-known resort town is known for it's medieval town center, half-timbered houses, and cobble stoned streets. Above the town sits the turreted Monschau Castle that nowadays hosts open air concerts in the warmer months. 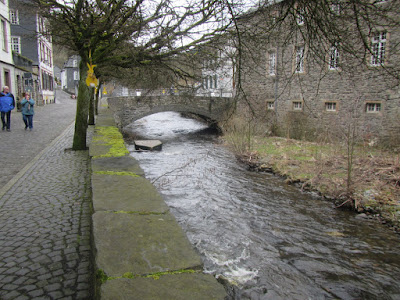 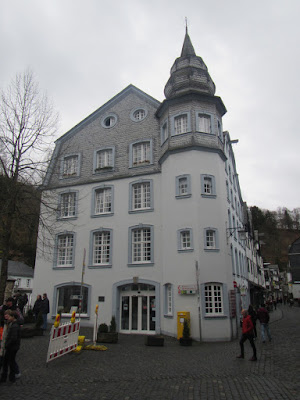 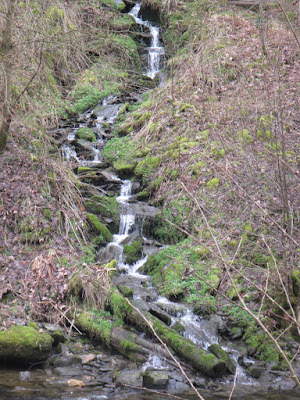 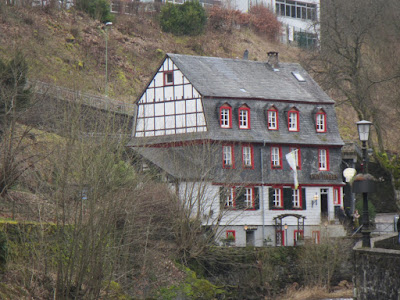 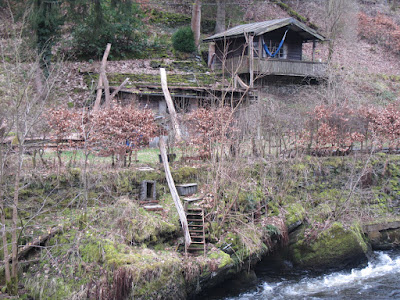 Travel is a wonderful way to learn about things that we never knew we wanted to learn about, like half-timbered houses. According to me, a ditzy female who knows absolutely nothing about construction terms, these gingerbread styled houses with decorated wooden beams are "cutsy" and nothing more. Apparently, they go by the name, "half-timbered houses," which is a style of construction common in Germany, Switzerland and Austria. Dating back to the 12-century these homes around Europe were built with traditional wood frames and then the outer shell was filled in with plaster, brick or other materials that left the wood beams exposed, creating a decorative look. 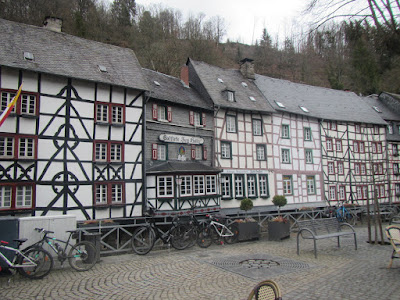 
The town of Monschau is lined with these stately, colorful, half-timbered homes that give it an inviting, cozy look that tourists just adore.

Today it was back to a bit of business at first as we woke up early to head into Brussels. Our mission was to find the travel clinic associated with a local hospital for some vaccinations. In the two to three years that we have traveled throughout South and Central America, Asia, Africa, Europe and the Middle East we never bothered to get vaccinated against any diseases we might encounter along the way. But while researching our trip to Kenya that includes a five-day safari with game drives before going to a month-long house sit in the village of Mtwapa, Kenya, we had some reservations. In talking to the homeowner who assures us that Kenya has no yellow fever, further research indicated that upon entering Egypt FROM Kenya we would be required to show proof of the vaccination. And since it's a good idea to have such vaccinations anyway as we plan on continuing to travel, we decided to go for it.

Once inside the hospital we found our way to the travel clinic and filled out some paperwork. Soon we were called in by one of the four doctors, all who spoke English. We discussed our travel plans and he made some suggestions as to vaccines that we should have. Yellow Fever, is a disease that can be contracted from an infected mosquito, so care must be taken when outside at night in infected areas. Of course we will use insect repellent and wear long sleeves and long pants when out and about in the evening but having the vaccine is an added measure. Typhoid is a disease that comes from drinking contaminated water or food, so another good shot to have for countries like Kenya. Also while there we updated our tetanus booster which is supposed to be done every ten years.

After our consults with the physician we were told to wait until the nurse called us in to administer the shots. And finally we had to pay the bill and pick up our immunizations cards that we would carry with us in our travels. The cost 25 euros for each consult, ($30), the shots were 25, 19, and 14 euros, for a total of 59.63 euros ($72) for a total of about $100 each. We were in and out in about an hour and very impressed with the way the whole clinic was run, despite the number of people being serviced.

Since it was still early on our way back to the house we stopped in the town of Louven, Belgium. Known for it's many breweries the town of Leuven is in the Flemish part of Belgium, which means they speak Flemish. The area near where we are house sitting is the French part of Belgium, since the country is divided up between the two languages.

Leuven features a central square with a 15th century town hall that is just gorgeous. Decorated with hundreds of statues of local figures, saints, and biblical characters, its tall spires give it quite the impressive look. Nearby, St. Peter's Church features an impressive, wooden carved pulpit along with a short bell tower that has never been completed due to sinking soil underneath. We strolled around the old market taking in the sights before heading over to visit another classic. 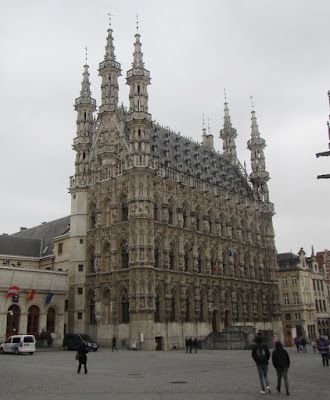 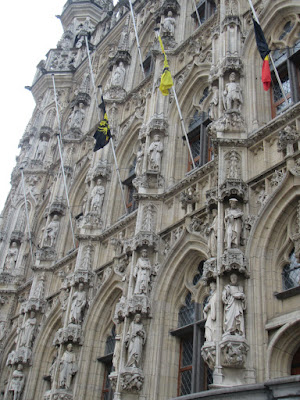 Groot Begijnhof, a well preserved beguinage, or a home for semi-religious, unmarried woman who wished to live in a community setting, dates back to 1234. This complete old city is fully cobble stoned throughout, with brick buildings, perfectly manicured walkways and gardens that is now owned by the University of Leuven. 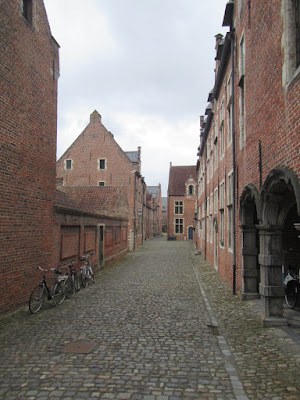 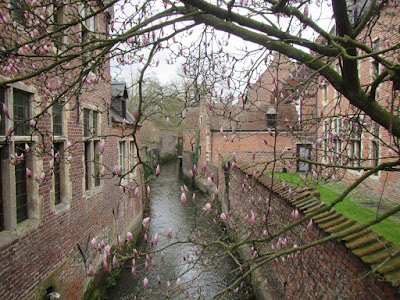 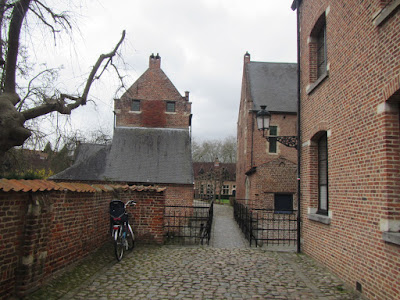 Tired from an early day out we made our way back to the house. Patiently waiting for us was Pakman, our loving, furry new friend who we are taking care of these days. She was in need of some cuddles, belly rubs and walks before settling in for the night and feeding her some grub. Another day of fun adventures in Belgium.....along the gringo trail.