With my permission Clyde and our friend Daniel took off yesterday to pick up some chicks. They came back with not one but a dozen cute, little, fuzzy yellow baby chicks that will hopefully provide eggs in the near future.

They drove over to Melo, a well known farm and pet store throughout Panamá where they sell chicks. Specifying to the sales clerk that they wanted hens not roosters that would be good at laying eggs. The clerk explained in Spanish that these chicks were "pollas" not "pollos" which means they're girls not boys. They both had to chuckle at those words since neither had ever heard a gender assigned to the word for chicken. 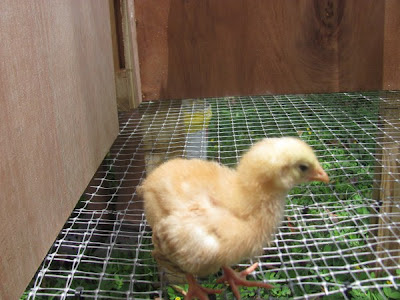 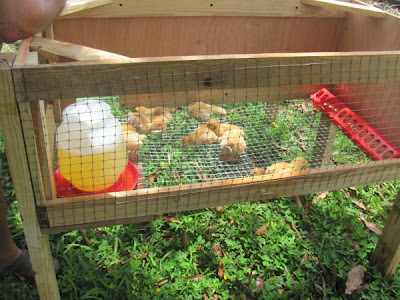 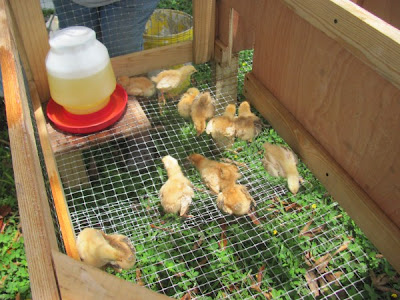 Each chick cost 70 cents each and they also bought feed, vitamins, a water bottle and feeder all suggested by the sales clerk of course. Chirping away they're happily getting used to their new home. Once they're big enough to be out in the open six of them will go live with Daniel, although they're not the kind of chicks he's usually looking for. 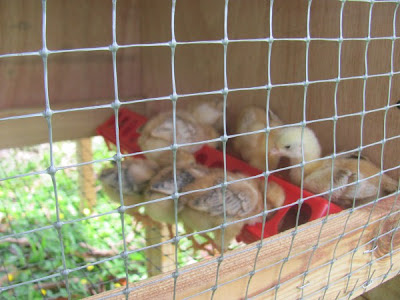 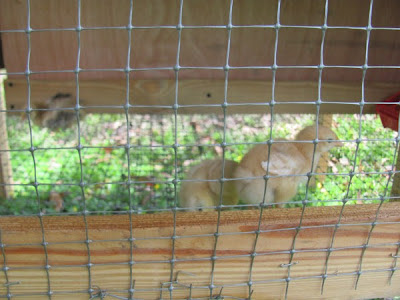 ﻿
As soon as they're big enough to avoid predators we hope to let them run loose as free range chickens. This will depend on how Venus our Doberman feels about sharing the property. So far she's barely noticed that they're here. She's more interested in barking up at the mango tree that's no longer producing mangoes. We're not sure if she's chasing birds and lizards away or telling the tree to drop a mango so she has something to munch on?

Chickens run free everywhere here in Panamá. We see them alongside the road, in front yards, in the city and even crossing the road. Perhaps raising some of our own chickens makes us official Panamanians now. And my dear husband is among cackling hens, both inside and out now...along the gringo trail.
at August 22, 2012