Socializing Among The Gringos.....


The past few weeks have been a whirlwind of social events with these two butterflies flitting our wings from flower to flower.  On Wednesday the 13th we welcomed a flash from the past when two old Texas friends dropped by our casa.  Jan and Art (or Doc to some) who frequented the same resort near San Antonio that we did, began to think about Panama about the same time we did.  In fact before we left we had many a long chat with them in the pool over our decision to move, and they were starting to think Panama might be the right choice for them too.  Last year not long after we moved here they made their first exploratory trip, and this was their second.  It was nice to sit down over some drinks and share our experiences comparing notes, since they've ventured to parts of the country still unknown to us. Both seemed to be enjoying retirement in Texas and looked well and refreshed.

Later that week we enjoyed having lunch with local friends and a chance to see their brand new house in Punta Chame.  During our trips to the gym and pool we met Sue and Jim, another American couple that moved here soon after we did.  They'd been living at the resort in a condo before taking on the daunting task of building a house. Their builder spoke no English and they spoke no Spanish yet they all managed to come together on design plans for a fabulous new home using a translator.

On Sunday we met up with Allison and Ray, some friends visiting from Virginia for their second exploratory trip. These two found us through the blog and soon the four of us had become email friends.  We met them on their first trip last year and immediately we all seemed to click. We were thrilled to hear that they were returning to Panama a second time just five months later.  Apparently, we really impressed them! Donned in green for St. Patrick's Day we headed over to Louise's bohio for a party sponsored by CASA (Coronado Area Social Association).  An eclectic mix of 60-some gringos dressed in green sipping on green beer and green punch made for a greentastic afternoon.﻿

The next day Allison and Ray were meeting with a realtor to look at property in Altos del Maria, a gated mountain community.  Since we'd never been up there I asked if we could tag along as they browsed for homes.  This picturesque mountain community was full of tall pine trees, mountain vistas, and beautiful homes way our of our price point.  Everyone comes to Panama with different expectations and a different budget and some choose to live in the mountains for cooler temperatures. Before leaving the area we stopped to visit friends Melissa and Bill who are in the middle of a long remodeling project.  They graciously showed us around their beautiful home which has a panoramic view right out of a magazine. 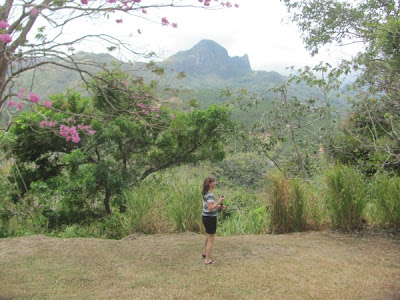 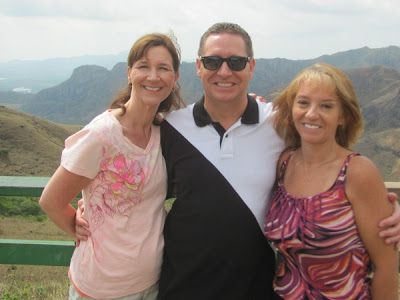 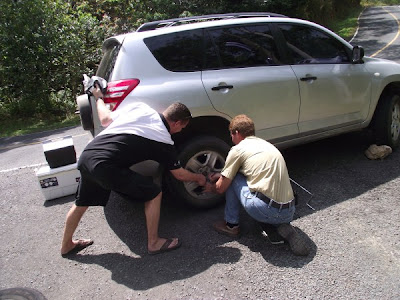 Flat tire on the mountain! 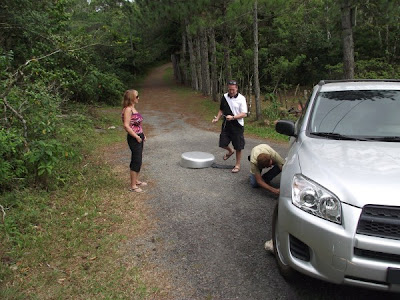 Terry "supervising"....Someone Had To Do It! 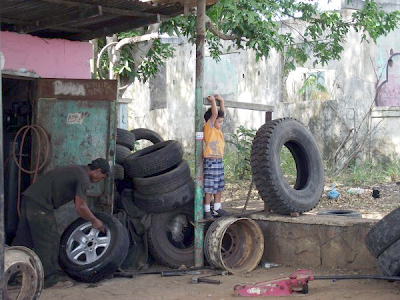 I liked this picture that Allison took
of my tire repair
﻿

A few days later we joined together again as Clyde and I played tour guide to show Allison and Ray around the area.  Pointing out some of our old stomping grounds in Capira and La Chorrera before heading to Westland Mall for some browsing fun. Clyde just loves to take visitors up the road to Altos de Campana for the breath-taking views at the mirador. As the road narrows the trees seem to reach out and embrace the car with their branches, as the car chugs up the mountain. It's here where passengers begin to wonder if this really is a pleasure cruise into the clouds or a permanent resting place over a cliff?  We try to assure them that the machete in the back is merely for cutting brush but it does make some raise their eyebrows.  Before long a flat tire had us stranded on the side of the road and Allison and I watched as the men busily changed it. Eventually we all arrived safely back at our house where we said a fond farewell to our friends who still have to work for another few years before they can retire to Panama.

Earlier in the week we met for a brief lunch with Maggie and Mike, another couple following the blog who were vacationing here. Also in the early planning stages of retirement this trip opened their eyes to what Panama has to offer.

This week we're back to our quiet life as things have settled down.  Clyde is making sawdust daily as he works diligently outside making kitchen cabinets.  I'm happy that the mess is still outside at this point, but I do realize that before every beautiful remodel there must be a mess. One of these days he's going to take a sledge hammer to our current kitchen counter to break up cement counter before he can put in the new cabinets. 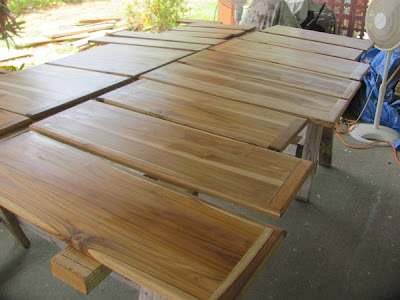 First coat of polyurethane on
the door and drawer fronts
﻿

Last week was the six week point since my hysterectomy and a visit to the gynecologist gave me the green light to resume normal activities.  As soon as we walked into the doctor's office he told Clyde that he saw his picture on the front page of the Playacommunity free newspaper.  The doctor said, "I showed the picture to my wife and told her, this is the husband of superwoman."  He'd been teasing me about being superwomen since I'd recovered so quickly from the surgery.  Clyde is now a member of the CASA Board and recently a photo of the group was featured on the front page of the local community newspaper making him a celebrity. 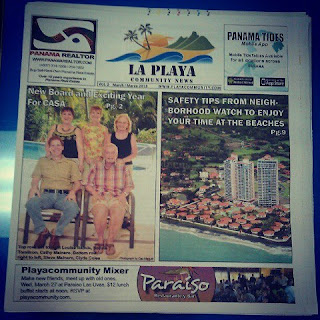 I've been hitting the gym and spin bike while Clyde works on the kitchen project outside.  As my Spanish is improving I'm much more comfortable going out on my own. Unlike in the rest of the world, the days aren't getting any longer or shorter here though.

Most areas of North American and Europe do observe daylight savings time (DST), while most areas of Africa, and Asia do not.  In South America the countries to the north of the continent near the equator do not observe DST, while Chile, Paraguay, Uruguay and the southern parts of Brazil do. Oceania is also mixed with parts of New Zealand and Australia changing the clocks and other parts not.


Personally I've always enjoyed having longer hours of daylight in the States and wish they would have just kept it that way.  Living in Panama now so close to the equator the days are short and we've had to adjust to less hours of daylight.  The sun comes up around 6:30 a.m. and sets about twelve hours later.

Everyone is gearing up for a long holiday weekend when many of the million residents of Panama City head our way to the beaches.  Schools close early tomorrow as do some businesses too in order to get ready for the long Easter weekend.  But there are no Easter bunnies here, just church services and dinners at home with friends and family.  Our plans are to stay close to home and far away from the packed beaches as the weekend progresses.  We'll just lay low, take it easy and enjoy another another weekend in paradise.....along the gringo trail.
at March 26, 2013