From The Mountains To The Amazon Rain Forest Of Puyo, Ecuador....

Several locals we met along the way asked what we'd been to see in and around the area. We gave them the list of museums, parks and other towns like Baños, Quisapincha, Riobamba and such and one right after the other said in Spanish that we just had to visit Puyo. They told us that Puyo is beautiful since it sits in the middle of the Amazonian Rain Forest and is home to several indigenous tribes of people. Well if we must.....we must so off we trekked again to the tropical village of Puyo.

My online research said a bus ride from Ambato to Puyo would take about 90-minutes although the people we talked to made it sound longer. So we woke up early and Clyde took Jethro out to the park for a thorough exercising while I was getting ready. Back at the apartment he was fed and watered before we packed our bag and headed out for the day.

The word "puyo" means "clouds" in the native Kichwa language.  Everything I read online about the town said it was always covered with thick clouds and rain, so we prepared accordingly.  Armed with extra warm clothes and two umbrellas we were well prepared.

We boarded a bus for Puyo that we hoped would go directly there without stopping a bunch along the way.  But soon after we had that thought the bus stopped in front of a small roadside restaurant serving up, "sanduches de higado."  With a combination of English and Spanish the word, "sanduches" or "sandwiches" can be see most everywhere here. The word we learned in Panama is, "emparedado," although I have to admit that "sanduche" would have been easier. And "higado" is the word for, "liver" and let me tell you those little suckers looked nasty.  A round roll cut in half with a slab of dark liver and white cheese in it was enough to ruin our appetites. For some reason the bus sat there for an eternity while hoards of vendors boarded the bus selling all sorts of stuff. Eventually we hit the road again for a long, arduous journey to the town of Puyo.

By the time we reached the little town over three hours had gone by and we both had to find a bathroom as soon as possible.  There was nothing around but a few dumpy, hole-in-the wall restaurants but that didn't keep Clyde from asking anyway.  One vendor pointed inside and I was the first one to try out the scary bathroom.  I had to walk through a small restaurant, squeeze in through a storage closet into a dark, tiny bathroom.  While it wasn't much it DID have a seat on the bowl and even toilet paper, so to me it looked like a throne fit for a queen. I closed the door and turned on the light which didn't work but the glass window in the door allowed in some light but lacked privacy.  But at this point I didn't care since I had to pee so badly. Outside the bathroom was another room with a twin sized bed in it so we were apparently inside this women's home.   After I was done Clyde followed suit and even gave the vendor some change as we thanked her profusely for allowing us to use her bathroom. 
Immediately after leaving the bus I started taking clothes off.  Instead of being cloudy and wet Puyo was probably 90 degrees with bright sunshine and clear skies. I guess that'll teach me to believe whatever I read online.

We hopped into a taxi and asked to be taken to the central part of the city.  Since it was way past lunchtime we asked the driver to suggest a place to eat. He dropped us off in front of a café that seemed to only offered coffee and desserts so we went elsewhere. Across the road was an impressive looking but touristy restaurant that we headed into.  Trying to get in and out quickly we both ordered a chicken sandwich.  Our plan didn't work as it took forever for the food to come out but eventually we made our way back onto the streets. 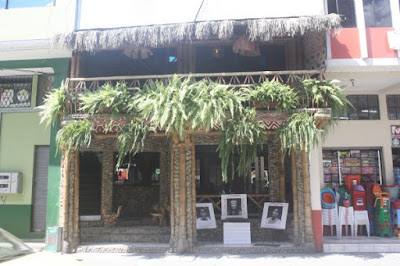 Clyde found another taxi driver and asked him the same question:  what would you suggest that we see? What is your favorite thing here?  And then asked him to take us there.  One of the things on Clyde's list was to see an indigenous village since there were several in the area.

We headed out on the main highway for a long, spirited drive with this driver.  Apparently the yellow line in the middle of the highway meant nothing nor did the stop signs or speed limit signs as he seemed to ignore them all.  Eventually he turned off the main road and down a dirt road that stopped at a driveway with a welcome sign. The driver entered the driveway and parked the car near a bridge that crossed over the river to the village. Clyde began taking photos from where we were when the driver told us to walk across the bridge and into the village.  Clyde asked him if that was permitted and he assured us that it was. 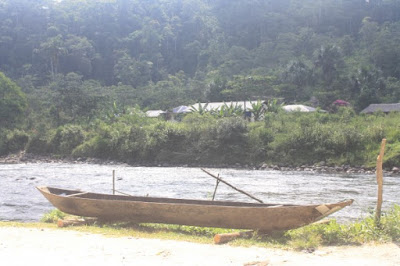 A Canoe At An Indigenous Community 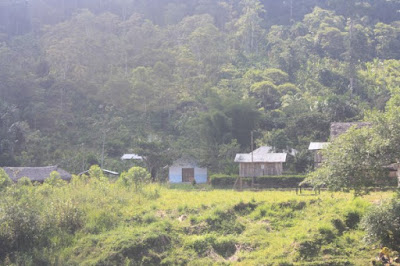 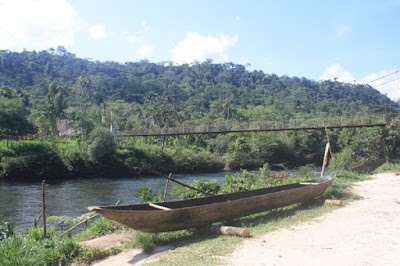 That Long Bridge Leads To The Village 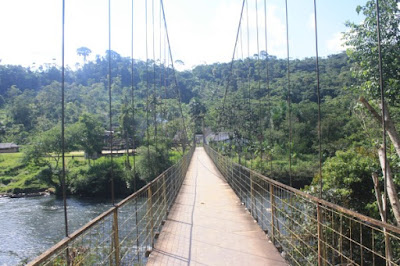 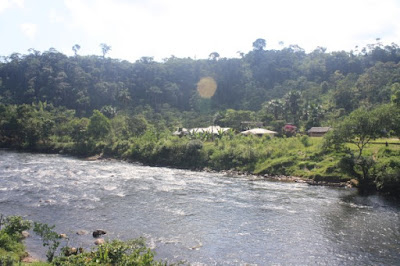 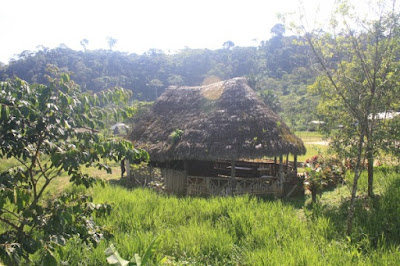 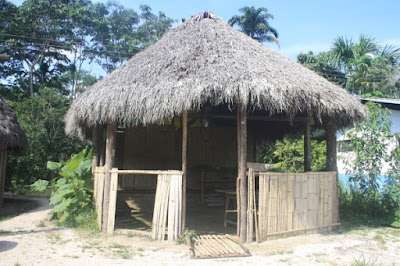 The rickety metal bridge was long and scary and creaked with every step that we took. But safely we made our way to the other side and walked into the simple village.  Just then an elderly gentleman walked over to us and welcomed us with a handshake. Without a hesitation he kindly showed us around his village and explained what each building was for. 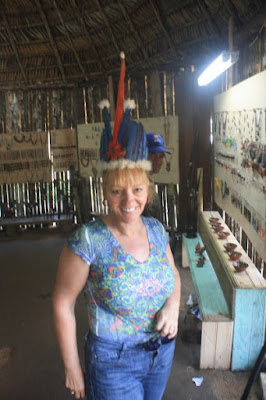 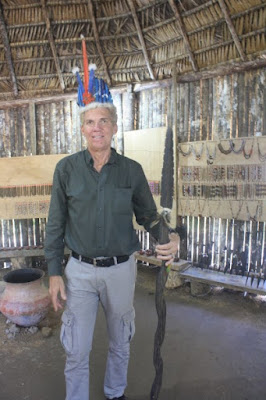 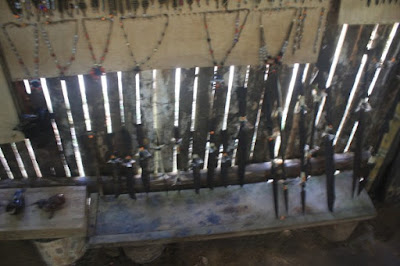 Hand Made Jewelry For Sale $2 Each 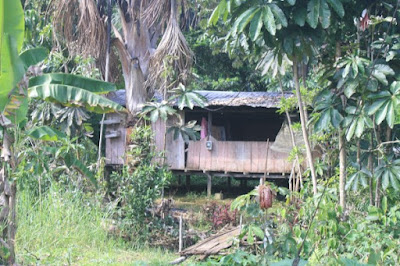 One Of The Homes
35 Families Live In This Village 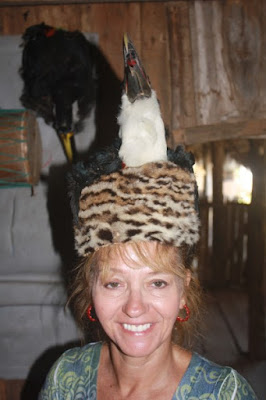 Silly Toucan On A Hat

We were in the Kichwa Community of the Cotococha being escorted around the village by its Shaman.  Our first stop was a building where the ladies of the village made jewelry.  There was an assortment of necklaces, bracelets, earrings, pottery and more that were on display.  Two young girls came in to sit there apparently waiting for us to make a purchase. Although we're not into buying stuff when we travel I almost felt guilty NOT buying something here.  After all we'd just dropped by unannounced to poke our noses into their world.  Then I noticed the price of $2 on all of the jewelry and thought it was too cheap not to buy something.  I picked up a pair of earrings and Clyde choose a bracelet made out of jute.

The shaman was in no hurry and seemed to enjoy telling us about his village of 35 families. He showed us some natural medicines that he uses along with some spiritual rocks, bones and other odd things.  I could have spent the entire day there absorbing all of the knowledge that this man of natural medicine possessed. But we needed to get back to our driver who we left waiting patiently. 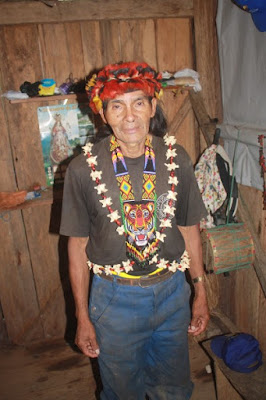 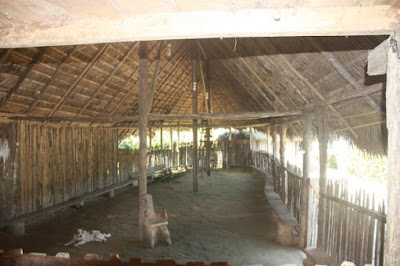 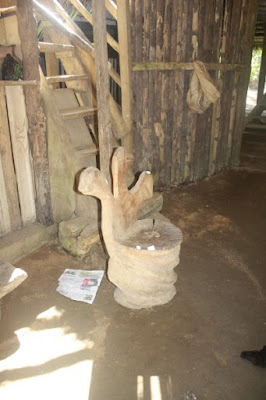 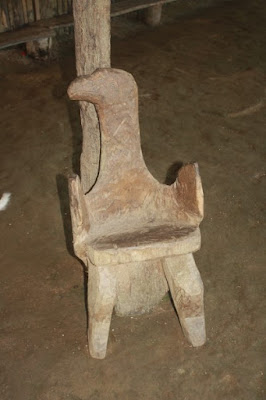 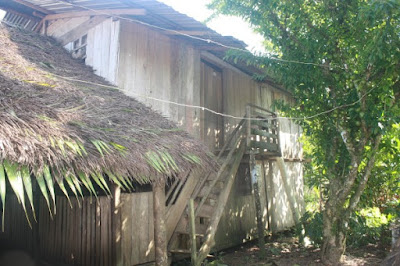 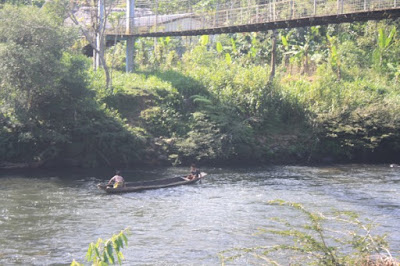 Local Boys Fishing In A Dug Out Canoe 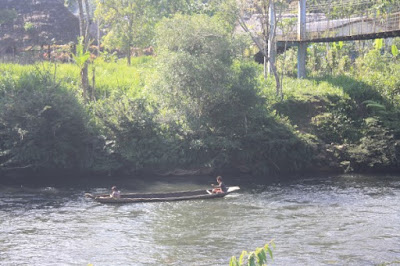 From the village he showed us a few other sights including a spot where two rivers joined into one.  There were some rustic little cabins nearby for rent for a cozy night in the woods. But it was getting late and we knew we had a long bus ride back to Ambato.  We found the bus which seemed to be getting ready to leave.  I refused to board the bus before stopping to pee since I knew we had a long ride back.  After finding a seat Clyde decided to get off and use the bathroom making sure to tell the driver that he would be coming back.  A few minutes later I feel the bus pulling out and ran to the front yelling, "espera, mi esposo fue al bano."  The driver looked at me and said, "si," and made some comment I didn't understand.  Apparently they were just backing up not leaving yet.  Clyde appeared a few minutes later looking frazzled since he'd climbed on board another bus to Ambato and panicked when he didn't see me there.  But things turned out and the trip back took an hour less than the trip over. 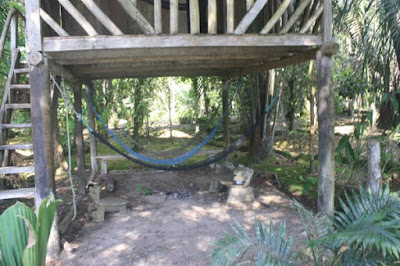 Cabins For Rent In The Jungle 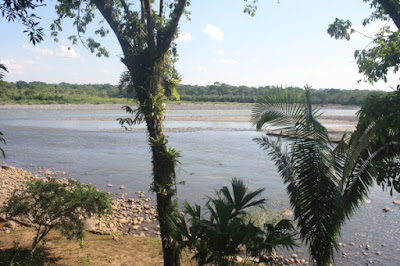 Two Rivers Emerge Into One
﻿

I could understand why Ambato people love Puyo because it's so different from the chilly, mountainous landscape here. Not used to seeing green, lush rain forest it's a stark difference from the Andean Mountain region for them. But for us not so much since Panama is full of tropical rain forest too.

Exhausted after another long day we enjoyed a walk in the park with Jethro before settling inside with some sandwiches for dinner. Today we're taking it easy and resting up for more adventures to come......along the gringo trail.
at October 24, 2015