From Sweating In Nicaragua to Chilling Out In Panama.......

Wherever we travel it's the little things of everyday life that seem to have the most impact on us and it's those things that stay in our minds. For this trip to Nicaragua it's certainly been the poverty level here that bothered us the most.  This is the seventh country we've visited in Latin America and while they all are poor compared to our lives in the US, this has been the poorest one.  We've been to Mexico, Ecuador, Venezuela, Costa Rica, Colombia, Panama of course and now Nicaragua. 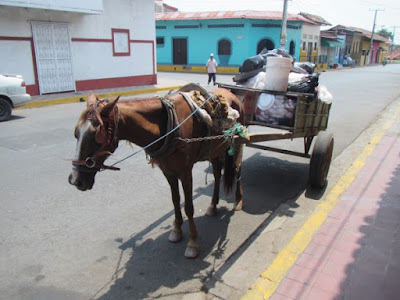 Along the way we've met many gringos who are here trying to help change things just a bit. Some are educating young girls and helping them to realize they don't have to start a family before they graduate high school.  Others encourage young boys to stay in school and get an education instead of dropping out to live what they think will be as easier life on the streets. 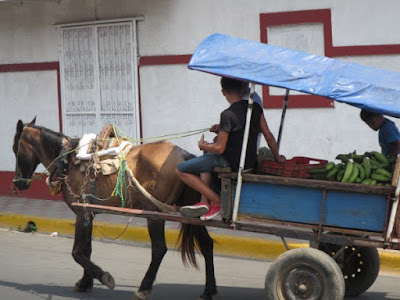 
Granada is a little like the wild west with many locals using horses to get around.  Need a moving truck, construction supplies, a ride to work or even transport to ones final resting place in a cemetery? Surely it will be delivered by a horse drawn cart of some type. One of the coolest things I've seen here is an elaborate, wooden stage coach funeral wagon pulled by two horses who are adorned in crocheted outfits. It was parked in front of a funeral parlor perhaps waiting to take someone to their final resting place in style.    Even the horses looked sad while waiting to get to work, perhaps because they were draped in crocheted blankets in the hot, afternoon sun? On our visit to the city of Leon we spotted what looked like a restaurant called, "All About Fish," that seemed to share a building with a funeral parlor. "How bizarre I thought," perhaps they kill people with their food to bring in customers? 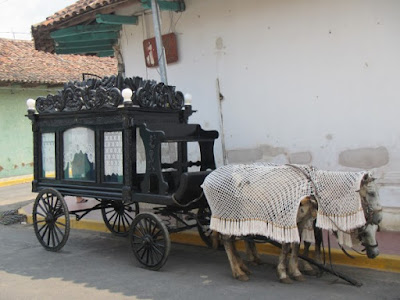 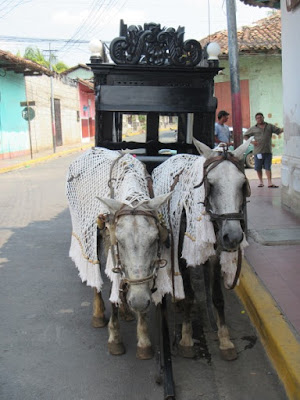 Speaking of food since we arrived here we've noticed many restaurants offering tacos, burritos and other fare that sounds like Mexican food to us. One day we stopped for lunch on the calzada, the populated, touristy part of the city with plenty of restaurants.  The menu said, "Comida Tipico de Nicaragua," which means "typical Nicaraguan food," yet the special of the day was two for one burritos.  We choose the chicken burritos which were really good yet featured a filling and side dish that would make our Mexican friends cringe.  The large flour tortilla was filled with a generous portion of chicken, a thin layer of refried beans and cole slaw and served alongside fries.  Here they grind up cabbage, drench it with vinegar (but no mayonnaise) and put it on just about everything. It works for us since we use cabbage a lot in Panama and also and I really love cole slaw.  Cabbage is cheap, holds up in heat and humidity better than lettuce, and is good for us too. 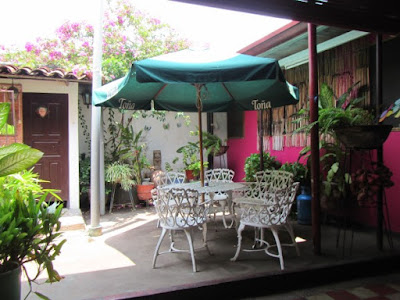 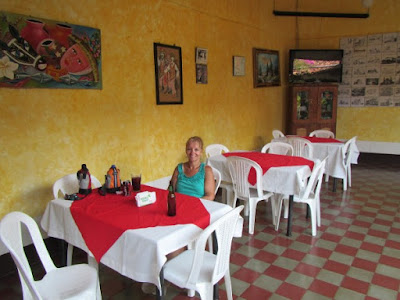 Cooling Off Under The Ceiling Fan Waiting For Lunch 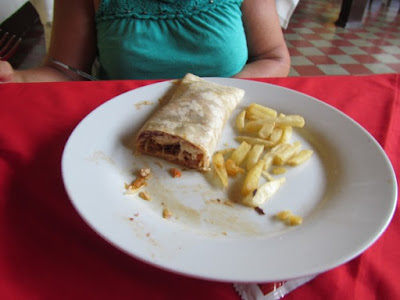 Chicken Burrito Stuffed With Beans And Coleslaw Served With Fries

As we walked around the towns of Nicaragua on foot we peeked into windows trying to get a glimpse of what life was really like. While strolling around the city of Leon we looked into an open window. There we saw a classroom of adults typing away on ancient manual typewriters. The sign outside indicated it was a school where eye doctors were trained. 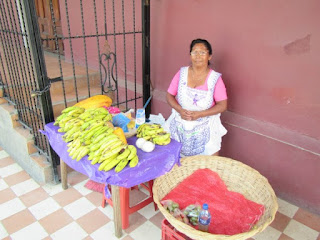 We Bought A Few Bananas From This Lady

Our last day in Granada was spent visiting with friends Rich and Pat for the last time over a dinner prepared by my wonderful husband.  Some spaghetti with a yummy home made meat and vegetable sauce, cookies for dessert and way too much wine was a nice way to end our vacation. And it was nice to hang out in the air conditioning of our little apartment instead of out sweating in some local restaurant. While we thought the weather in Panama is hot we found that Nicaragua was even hotter, at least it felt that way to us.  Perhaps it was more humid?  Who knows but we manage to live in Panama without air conditioning and in Nicaragua that didn't seem possible. 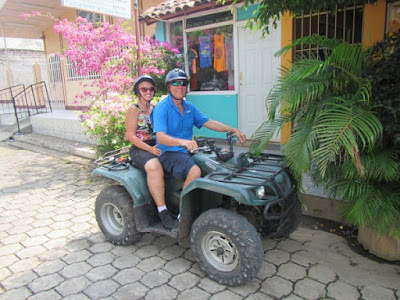 Our favorite thing in Nicaragua was our Quad Wheeler Excursion
﻿

The next morning our airport shuttle arrived at 8am along with the maid to check us out of the apartment. We enjoyed a relaxing overly air conditioned trip to the airport commenting how green the Nicaraguan landscape had become with the start of their rainy season.  The quick 90-minute flight from Managua, Nicaragua to Panama City was peaceful as we enjoyed a small chicken sandwich for an inflight snack.

Once out of the airport instead of waiting for our usual bus from the airport to the large bus station at Albrook Mall we hopped on one with a different route through the city. We had comfy seats in the air conditioned bus that began to fill up with locals headed home from work. Although the route was longer and traffic was heavy we were enjoying a tour of Panama City that only cost us 25 cents each. But then about an hour into the ride a little boy threw up at the front of the bus a few feet away from us.  People began to gag and head toward the back of the bus to avoid stepping in the mess.  The nasty smell permeated the air causing most of the riders to scrunch their faces in disgust.  The older lady who was with the kid also walked to the rear of the bus and we were just hoping the kid didn't barf again causing a mess in two places.  It was rather comical watching the faces of passengers who boarded the front of the bus only to look down at the vomit on the floor.  They carefully avoided stepping into it and made their way to the rear of the bus where the crowd was huddled together.

A young Kuna Indian mother with a baby and toddler sat down in two seats facing us.  The young lady looked to be about 14 years old and already had two kids. An older Kuna woman in full native attire sat next to her and we thought she must be the Grandma.  The baby that the young mom was holding was drooling with spit up and we hoped there would be no projectile vomiting since he was just  few feet away and facing in our direction.  A while later the baby began to fuss so the young mother simply reached into her blouse and pulled out her milk-filled breast to offer the little tyke.  He clung onto her boob with both of his tiny hands suckling her milk for everyone to see.  Grandma chatted with her as the bus made it's way through the hectic life that is Panama City.

Nearby a handicapped man with one leg in a wheel chair was offering to hold purses, brief cases, and groceries and even kids toys of passengers standing nearby.  He looked funny with plenty of things piled on top of him but seemed content to help out.  Our longer than expected bus route took over two hours to get us to Albrook Mall.  Since it was now time for dinner we stopped to eat before boarding another bus for home. We boarded the second bus around 6pm and being that it was Friday during rush hour the city traffic was grid-locked. Our normal 90-minute ride to our house in Chame took over two hours and it was after 8pm when we arrived home. And once again we froze for hours in the overly air conditioned bus instead of sweating like we did on the buses in Nicaragua.

Back in Panama the rainy season has started and brought some much needed rain to the dry country. It poured hard for most of the morning as we unpacked and caught up on laundry and cleaning after being away. It's actually a cool-ish 80 degrees here with the cloud cover.  Time to get resettled into our normal routine until our next adventure comes along......along the gringo trail.