After our safari had finished we were offered a chance to take a tour of a traditional Masai Village. For the cost of $20 per person, we were greeted by our guide who would take us through a tour of his village. As we followed this young man through the muddy, reddish soil I tried to avoid stepping in cow poop that was everywhere. But I soon realized that the poop was mixed in with the soil, making it impossible to avoid getting it onto our shoes. Some of the Masai were barefoot while others wore tiny sandals, allowing the poop to squish between their toes.

Greeted By These Guys

The Masai people are nomadic, laying down roots for only five years before moving on to another location. Their world revolves around their cows which they use for food and trade, just like money. Trading cows is used to buy wives, other animals, or to solve issues between friends.  They live in tiny homes made from cow dung, sticks and the roofs are made from elephant grass. The women are the only ones that can build these houses, using up to 20 women to build each one. The women keep their heads shaved since they find dealing with puffy hair too difficult in a hot climate. 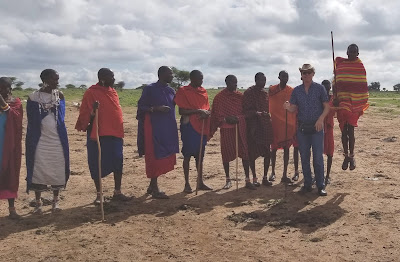 Entertaining Us By Dancing

To welcome us some of the villagers danced and sang for us using a variety of yelling, chanting and jumping motions which were strange but interesting. Next they squatted down asking us to do the same, or just to bow our heads in prayer. Their prayer was for us that we should have a good safari and safe travels.

Continuing through the village we watched as five young men demonstrated how they could make fire from rubbing a stick to a piece of wood.

Showing Us How They Make Fire

Next, we met with a medicine man or tribe doctor who taught us about the medicinal trees that were used by the Masai. There were some to treat malaria, headaches and even to increase male potency, since the Masai men can have up to ten wives.

After that we were invited into the home of the community teacher, a tiny hut that he shares with his wife and two daughters. Wearing my purse over my waist I was barely able to squeeze through the narrow door that was made totally of dung. It was totally dark with no light except what came through a tiny window on one side. When my eyes adjusted to the darkness I was offered a hard seat on a cow hide that was used as a bed for two girls to share. Clyde sat on a plastic bucket that apparently served as a chair. Next to the girls bed was a cooking area made up of sticks, under the tiny window which was put in place so that the smoke could go out. He  went onto explain that they believed the smoke from the fire to be medicinal for them, so it was a good thing.

Now We Are Invited Into One Of The Homes

Cooking Area Next To The Bed Where I Am Sitting

Bed Made From A Cowhide....Hard And Cold

Get Me Out Of Here

Houses Made From Cow Dung

Eventually we were invited into the school house which was really a disturbing experience.  We were greeted with boys singing us a song and later singing the alphabet in English. Then a toddler, perhaps a one or two year old, walked into the middle of the room and I realized he was wearing NO pants and No shoes. His hand was near his penis that he kept touching, making me think he was about to pee in the middle of the room. The age range in the room was from toddler up to maybe eight or nine?

One Of The Boys With No Pants


All that I could think about was these little boys with no pants, spreading germs to the other boys whose laps they were sitting on. These kids walk in cow poop all day long, many of them wearing no shoes, no pants and probably peeing freely wherever they want.

Clyde and I left there shocked, almost in a daze after seeing how they live. The best word to describe it for me was disturbing or disgusting. As we climbed back into our van I felt dirty and literally wanted to take off my shoes and burn them, because they were covered with poop. I asked our driver to stop somewhere so we could clean off our shoes, but Clyde had a better solution. We stopped on the side of the road and my dear husband Clyde stepped out of the car and cleaned off each of my shoes in the grass. Then I pulled out some sanitizing wipes and cleaned them off even further.

It was as if I needed to wash the experience out of my head and try to forget or unsee what was in my brain. Somethings are better left unseen, and perhaps this was one of them? Yes, this was a life changing experience that we hope to forget as we continue our adventures in Kenya......along the gringo trail.