A Show Of A Million Legs, Police, Monkeys And More....In Kenya

Our adventure of house sitting in Mtwapa, Kenya continues and it seems like there is never a dull moment here.

A few nights ago I was rudely awakened when I saw Clyde standing near the open window talking to someone outside. Strange, since the house we are caring for sits on a one acre piece of jungle, and is fully fenced, so there should be nobody out there. After taking out my earplugs and waking up fully I heard Clyde ask the stranger outside, "what are you doing on this property?" The male voice replied in English, "we have been looking around for while and have not seen any intruders on the property, so we called the police." WHAT? Police! Then I hear the man ask Clyde, "where is Mama?" Kenyans refer to ALL females as Mama and ALL males as Papa. Those are even the signs on the toilets here to differentiate between the two rooms.

Assuming that he's asking about the homeowner Clyde explains that we are friends with Ingrid and are taking care of her home while she is away on vacation. To this he adds, "my wife is sleeping here in bed."

The voice then says that they had to climb over the fence to get inside the property, and could Clyde come outside to open the gate? Clyde says it's dark and I cannot see you, please shine the light onto yourself so I can see who you are. The man does as asked and Clyde sees the figures of three, uniformed security guards standing outside in the pouring rain, and next to them was a police officer. Clyde then says ok and puts on a pair of shorts in order to go outside.

At this point I crawl out of the mosquito netting that is covering the king-sized bed like a huge tent, put on some clothes and begin to access the situation. Panic comes over me and I begin to think, "is this a setup?" "Who is really outside and what will they do with Clyde?' "Are they here to harm him, me or both of us?" Plenty of horrible scenarios go through my mind, since after all we ARE in Kenya, Africa.....in someone else's house, with only a verbal agreement that we are allowed to be here.

Clyde returns a few minutes later unharmed, just a bit moist from the midnight rain and I ask for a full explanation of what that was all about? Before the homeowner left she casually mentioned that there IS an alarm on the house that is wired to the security company. She said that she put it in for house sitters and casually pointed out a switch on the wall in the dining room. The switch looked exactly like ALL the other light switches in the entire house, and there are way too many. Some of the switches turn on lights in other parts of the large home, or outside, and seem to have no rhyme or reason at all. Apparently, when Clyde was turning off the lights before we went upstairs to bed, he hit the switch for the alarm, unbeknownst to him. Two hours later the security guards were standing outside yelling, "hello, hello," up to our window. There is another switch for the alarm in the bedroom, tucked safely behind the bed where we are not likely to touch it. The one in the dining room now has a pillow case hanging over it to signal to us, NOT to touch it!!!


Having lived in Panama we are used to power outages that were common but only lasted at most a few hours. Usually whenever the lights went out Clyde would call the electric company and tell them, making sure the problem was something that they knew about and not something that was just in our house.

The homeowner did warn us that the power does go out here, but assured us that it was never for THAT long. So a few days ago the electricity went out around 6am we think but never came back on until about 4am the following morning. Not sure if this was due to heavy rain storms in the area or was  this a scheduled maintenance outage?

Just googled power outages in Mtwapa and came upon the Kenya Power website with scheduled outages needed for updating equipment and maintenance to the system. Interesting, now we have a future date to put on our calendar of an all day outage next week.

Ever wonder what happens when a thick, gooey, millipede is put through a wash cycle? Not much actually, other than breaking apart and freaking out the washer woman. There are plenty of these thick, black and orange millipedes here and one made its way into the washing machine today. 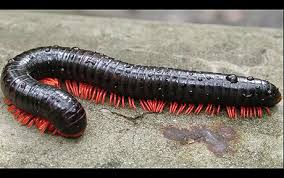 Laundry by the way, in this environment with 100% humidity much of the time takes days to dry, if ever. Everything constantly feels damp and nasty. We only thought Panama was humid but here during the rainy season it is much worse!

And we know we are in Kenya when we wake up, look outside the window and see monkeys running amok and even one happy couple making babies. Yes, right there on the railing of our terrace were a family of three with baby in tow, while Mama and Papa were having some alone time, just them, lots of monkeys and two silly humans looking on. But the whole mating act was over so fast that we didn't even have time to pick up our cameras to snap a photo. Here are some of them.