The Festival of Trays.....Once Every FOUR Years

Just an hours drive from where we live sits the medieval village of Tomar,(too-mAR) Portugal. While there are plenty of reasons for Portuguese people to celebrate, it's ONLY every FOUR years that Tomar hosts its biggest event. The Festa dos Tabuleiros, (fesh-ta doosh tab-lie-rossh) which translates to, "the Festival of the Trays," brings in literally bus loads of tourists and locals alike to experience this monumental street-party which is filled with much religious significance. 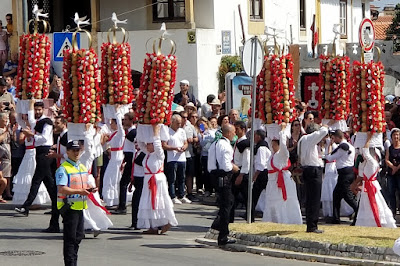 The origin of the festival is to worship the Holy Spirit, which began back in the 13th century, but the standards of the festival which are followed today date back to 1950, from what my research revealed. Although the entire festival runs for ten days, the largest parades and ceremonies are held on the two weekends involved.

Soon after we planted our feet on the ground in Portugal back in August, I read something about the festival and thought, "we need to find a place to stay in Tomar soon." After all, I thought, if we don't go see this festival now, surely we will forget the next time it comes around in another four years. So we booked an apartment on the outskirts of Tomar, close enough to attend the festivities yet far enough away to avoid the traffic jams. Our little apartment in the country was a ten to fifteen minute drive into Tomar.

With a festival of this magnitude, we found out in advance from our Portuguese teacher who lives near the area, that ALL roads into Tomar would be closed to incoming traffic. She told us about designated parking lots outside of the city where we could park and walk from there.

After settling into our apartment on Friday we headed into Tomar to let the party begin. Clyde opted to take the back roads in and we managed to find a parking spot fairly close. The main event on Friday that we wanted to see was a parade of oxen and horses. According to tradition, the origin of this parade dated back to the days when oxen pulled carts of food to be delivered to the poor people. Soon after arriving we noticed locals perched along the roadside so we quickly found a spot to sit and wait for the parade to begin. As usual with this type of thing, the parade began about 45-minutes after it was scheduled to begin and lasted just 20-minutes or so.

We strolled around the streets of Tomar enjoying the beautifully decorated streets. In preparation for the festival, locals band together to make thousands of paper flowers and designs to decorate the city.

The following day was Saturday and according to the schedule of events, there was to be a procession of the tabuleiros into the park where they would be displayed for all to see up close. Traffic was much worse this day and we had to park FAR away from the city center and walk. As we approached the main area we noticed that crowds of people were once again lined up along the road. As luck would have it we found an open spot with a clear view of the parade, that would be starting soon.

First came the marching bands playing festive music, followed by the what we came here to see. Girls carrying "tabuleiros" on their heads that were carefully and elaborately decorated with bread, flowers, wheat and topped with crosses or crowns.

According to what I was told, each tabuleiro or tray needs to be the same height as the girl carrying it. So for someone who is 5'3" or 160 cm like myself, I would be expected to carry a tray of the same height. Each tray is built around a tall cage made of wire and consists of 30 loaves of bread that weigh exactly 400 grams each. A bamboo dowel is inserted through each loaf of bread to hold them in place. Paper flowers are then wired onto the cage with stalks of wheat in between. The whole thing is topped with either a dove, representing the Holy Spirit, a crown or Templar cross.

The 30 loaves of bread alone weight in at 24kg or (52 pounds) before the other stuff is added. Not to mention the height of the thing that must be SO awkward to balance. Each girl wears a padded, round ring on top of her head that fits underneath the wicker basket that holds the large tray. Wow.....impressive to say the least. Each girl is coupled with a male partner who helps her bear the load, should it topple or begin to fall over. Both are dressed in traditional costumes. Girls wear long white dresses symbolizing purity. Each has a large ribbon sash tied around her waist that coordinates with her male partner. The young men wear black trousers with white, long sleeved dress shirts with the sleeves rolled up.

While we surely could not count the number of girls carrying trays in the procession, we were told there were 700 of them. This year they were trying to get into the Guinness Book Of World Records by having more girls carrying "tabuleiros" on their heads then ever before. So apparently somewhere, at sometime, some other people in the world attempted to carry more trays on their heads? Be that as it may, it is quite the impressive endeavor for any female to balance a 50 plus pound 5 foot tall, flower and bread covered cage on her head in hot, summer temperatures parading miles around a town. Don't ya think?

And in case you are wondering about the temperature, this is July and temperatures during the parades were in the mid 80's (or 30 celcius).

After the procession into the park each couple had to carefully sit their tray down, so they could be viewed by others. The couples then hopped up into trucks that whisked them away. Caravans of trucks carrying the courageous couples paraded by, horns honking as the crowds cheered them on and waved.

Since we wanted to see the trays up close we waited to be able to enter the park, but this was taking  way too long and we were starving as it was lunch time. Instead we opted to find food. But with hoards of people all around, every restaurant we poked our heads into had NO seating. We walked further away from the hoards of merry makers, hoping to find a seat in some restaurant anywhere. Eventually we did and were grateful to be offered food. We asked for menu's but were told there were only two choices of food. We could have a bifana sandwich, which is usually a slab of meat on a dry roll with no topping and not something that we enjoy. Or "lomo" which is pork served with fries. We choose the lomo which came with home made potato chips and a few picked vegetables. We washed it down with a huge bottle of water and shared a dessert of sweet pineapple, (ananas doce) in a gel type of sauce with coffees. The total for all this was around 21 euros.

Back on the streets we mingled among the crowds again to take in the pretty sights. Eventually we made our way into the huge park to view the beautiful display of 700 tabuleiros that were all lined up neatly on display. There were rows of these tall, stately, gorgeous, floral masterpieces for as far as our eyes could see.

How impressed we were to see such a variety of flowers, styles and designs on these beautiful works of art that must have taken SO long to create. Wow!

When we had enough of the festivities, the heat of the day, and the people we walked miles back to where our car was parked to end our happy day. Back at our rented apartment we enjoyed cool showers and relaxed. The nice thing about having an apartment instead of a hotel room is that we were able to cook a healthy dinner for ourselves. I made us chicken with vegetables along with some carrot soup and bread.

Our plan for Sunday, the following day was to head back into Tomar to see the BIG parade. But when we thought about it we realized that we had ALREADY seen the procession of girls carrying trays, so why did we want to fight even BIGGER crowds to see it again?

Many of our friends were taking buses into Tomar just for the day to take in the big event. There were reports of caravans of busses along the highways and side roads, ALL headed into Tomar.

We decided to NOT go see the final parade which would leave room for those who had not seen it yet, since we already had.

Instead we took in some other ancient sites: some Roman ruins, a castle in the middle of a river, a cave, and the house of a famous Portuguese photographer. Before heading back to our apartment we stopped to pickup a few groceries for dinner. Traffic coming out of Tomar was SO heavy with police directing traffic that it invaded the parking lot of the grocery store near our apartment. We were thankful that we opted out of the BIG DAY and instead enjoyed it a day earlier with far less crowds.

Another busy weekend getaway, with so much to do and see here in Portugal.....along the gringo trail.