Yesterday was spent running around looking for the "correct" transit authority police station to file an accident report.  Our bi-lingual friend David was kind enough to escort us acting as our Spanish translator.  To make a long story short, in the end it was just easier to "take the blame" and get on with life.  The other guy was calling us constantly, we couldn't understand him which was causing us lots and lots of stress.  Apparently, the other guy must have had a large deductible which he probably couldn't afford since Panamanians work for less than $2.00 an hour.  Besides that he had a wife and kids and Clyde just felt obligated to take the blame, since he felt that he really was at fault anyway.  We had David call the guy to explain this, and all has been peaceful ever since.

Our insurance representative explained that here in Panamá car insurance does NOT go up when someone has an accident, unless they have many consecutive accidents. And there is no point system here that goes against the drivers license either.  We have a deductible of $333.00 which apparently is half of the yearly premium. So we'll have to pay the deductible and they will fix both cars.

The next step was to find the insurance company office in La Chorrera, since it's closer to home than driving into Panama City, to change the paperwork to reflect Clyde being at fault.  The address of the Mapfre office in La Chorrera was "en frente de Panaderia Cesarin," which means "across from Cesarin Bakery."  There are THREE Panaderia Cesarin's in La Chorrera, but the paperwork neglected to tell us that. So off we went driving around in circles, asking people for directions and eventually found the place.  It was NOT across from the bakery, but down a side street, across from it.  Gotta love those street addresses here in Panamá, or lack of them.  Once we officially changed the paperwork, Clyde was able to breathe a sigh of relief and relax for the first time in days.

Last night we found a new restaurant called Mamma Mia's in San Carlos right on the Pan American Highway.  The owner is authentically Italian since he moved here from Italy and the food was scrumptious although a bit pricey for Panama.  The waiter was a delightfully charming, funny young Panamanian man named Elvis,who teaches in a bi-lingual school by day, and waits tables by night.
He even sang to us after I teased him about being named after a famous American icon, although he should probably keep his day job and not run off to Vegas hoping to make it big.  We think he enjoyed watching us struggle with Spanish before revealing that he speaks fluent English. 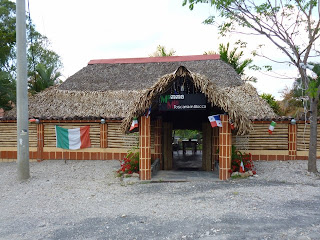 Mamma Mias Restaurant, San Carlos, Panama
On our way home we stopped in Coronado to finally connect with some email friends who found us through this blog.  Sharon and Bob moved here a few weeks ago from Nevada and are looking for a place to rent near the beach.  We chatted for hours with our new found friends with plans to see them again real soon.  It's been such a wonderful opportunity to make new friends through this blog and we enjoy helping others crazy enough to take the plunge and join us here in Panama......along the gringo trail.
at February 02, 2012