Yesterday we spent a quiet day at home, then a trip to our favorite outdoor produce stands for some fruit and veggie bargains.  Met up with friends for dinner before heading home for the evening.  It was nice to get away from the stress of what's going on back in Texas with our old house.

As you know from a former post, we sold our house in Texas prior to our move to Panamá.  But we did an "owner finance" which means we acted as the lender, and after a down payment the buyers made payments to us. And like I posted a few days ago, this only lasted for five months before the seemingly happy couple broke up, after the female half had an affair with a neighbor.

Since we left Clyde's friend with a key, just in case something like this happened, he was able to go in and check it out.  They apparently had a knock-down, drag-out that began inside the house with them throwing things.  There's a plate stuck a wall.....a broom stick in the ceiling.....white stuff from a fire extinguisher all over.....trash all over.....white paint all over the driveway that they apparently threw at each other's cars, from what neighbors told us.  There are holes in the walls, animal feces inside, broken furniture and much more.

We thought an owner finance would be safer than just renting the house because these people put down a substantial amount of money, before making monthly payments.  Our thought was that they'd have a vested interest in the house and want to take care of it, but apparently not.  Now I can understand an unhappy marriage that leads to a break-up and an ugly divorce, since we've been there and done that.  But what I can't understand is destroying someone else's property and having the nerve to leave it like that, and just walk away.  Yes, these two had us fooled as we thought they were nice people that really wanted this house and would take care of it.  Instead they turned out to be low lifes with no respect or regard for property.  Now we understand why they couldn't get a conventional bank loan if this is the way they treat a place.  So while they're out a bunch of money, we also need to spend a bunch having a lawyer do a foreclosure, fixing up the place to put it back on the market, and since we're not there Clyde's best buddy will be the unfortunate one to clean up the mess. 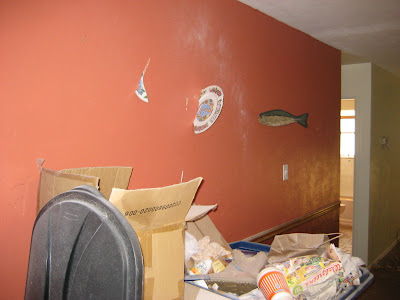 Plates and a decorative fish
embedded in the wall
﻿
Being the perfectionist Virgo that I am, we live clean and neat and leave a place in the same condition.  We don't even wear shoes in the house because I'm such a clean freak.  I would never, ever be able to walk away from a place that wasn't left perfectly clean.  So we're stressed and saddened by the turn of events in our old house.  But I suppose it's just a bump in the road, a new learning experience, and something we just have to get over as we live our life here in Panamá....along the gringo trail.
at February 10, 2012