Yesterday we took off on foot, prepared for another hot day of fun in the sun at Carnival.  As we approached the entrance there was a long line of scantily clad women and kids jumping around.   The police instructed the crowd to form two lines, one for men and one for women, so each could be "patted" down by a police officer of the same sex.  Once again I tried to get in the men's line, so the hunky, uniformed male police could feel me up, I mean...."officially pat me down" but I was told to wait with the women. The official pat down by a female cop
Once inside we had to push our way through the crowds while getting sprayed, stepped on and knocked around.  I had water in my eyes and couldn't see, but since I was being pushed along with no way to stop, I had to keep going with only one eye opened. 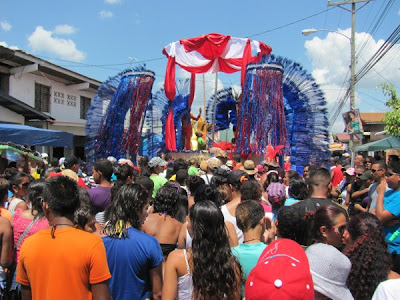 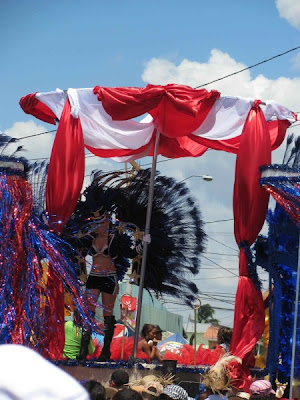 One of the Carnival Queens﻿
Next we were pushed into a crowd of "tunas" which are followers of one of the Carnival Queens. This group was following her float, so Clyde and I joined in, doing a walking, dance step in time to the blasting music, just following along.  Clyde apparently was trying to make his way in front of the float to take pictures, but this was no easy feat.  Eventually we did make it out of that crowd and into another in front of the float for a few pictures. 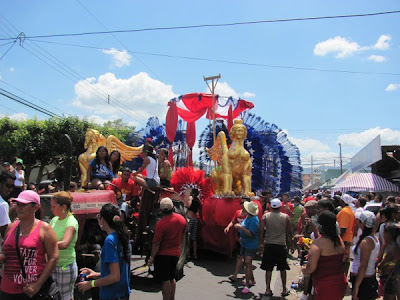 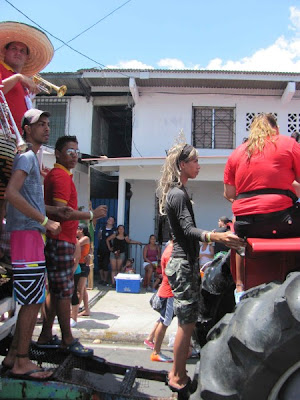 Another type of "queen" in drag.
Carnival seems to be the time for local gays to shine.
We found a place to stand with a tiny bit of breathing room for a minute.  Clyde coughed up 75 cents for a Balboa beer and we stood contemplating our next move.  A band of drummers played to our right, while a large tanker truck sprayed water to our left with music blaring.  The clashing of two distinct sounds of music, pounding our ears from opposing sides was only tolerable for a short time. 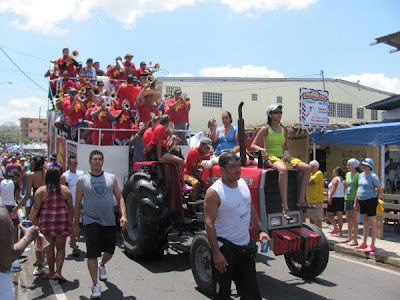 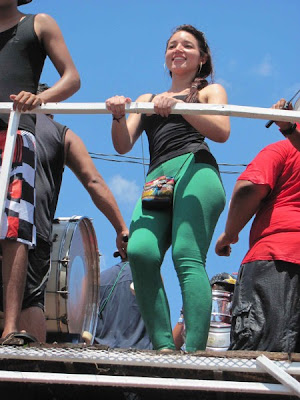 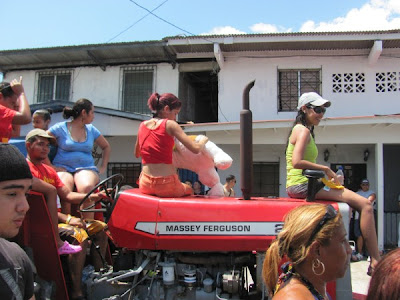 The tractor that pulled the float 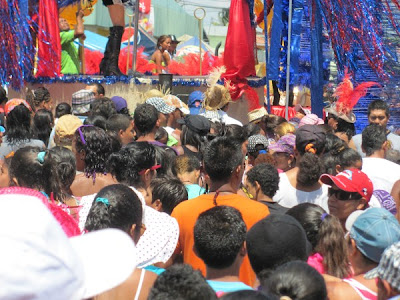 "Tunas" or followers of this Queen
Looking around at the massive crowds still pouring in we realized it was only 2pm, which meant they would continue to flood the place for hours.  This kind of craziness was best enjoyed after being saturated by some stiff, alcoholic beverages.  And I'm not sure if that would even make it tolerable for me, to be sandwiched in between a crowd of sweaty, wet strangers. So we decided to call it a day and head home.  The new Panamanian friend we  made yesterday told us it would be packed but since he and his wife were planning to meet us there again, we thought we'd give it a try. 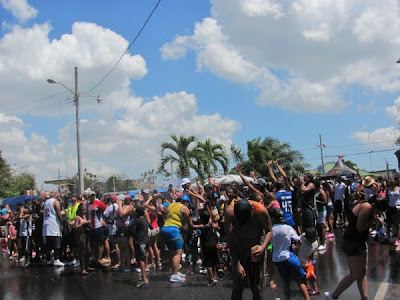 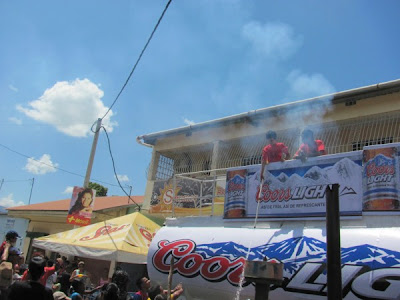 Watering down the crowds 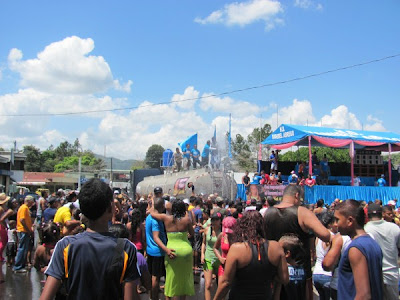 Enjoy the spray with a "Hand full of Ass"!
﻿
As we walked along the highway swarms of people went the opposite way, heading to the town square for the festivities.  Up the road a bit a new hotel had set up outdoor tables and large speakers that blasted music through the community.  People parked as far away as where we live, about a mile to walk to the grounds.

Clyde noticed a little ice cream stand on the side of the highway, which he just couldn't pass up.  He seemed to order "neapolitan" ice cream but the girl held up a container lid with chocolate on it.  Vendors here seem to have a "take it or leave it" mentality with little choice left to the consumer.  So with no choice of ice cream flavor he took a chance on it anyway, since they were only 60 cents each.

What we ended up with was a cute little conglomeration that looked like it was put together by a five year old.  A Styrofoam cup with a layer of red, broken up jello on the bottom, chocolate ice cream on top of that with chocolate syrup mixed in so it was no longer noticeable.  She threw in a few nuts and topped the ice cream with a few sprinkles, three mini colored marshmallows and stuck a pink wafer cookie off to one side.  At first glance it looked cute, but when I got to the jello I was perplexed. But this is Panamá and it's not for us to ask "why" just to accept things the way they are, or go home.

As we arrived home dripping in sweat since it was close to 90 degrees outside, we peeled off our clothes and hit the showers.  We decided to head the other direction to Punta Chame to hang out by the pool, then stopped for pizza at a new restaurant before coming home for the night.

On our way home we noticed some grass fires on the side of the road and up into the mountains. Clyde being a firefighter didn't seem concerned and felt they were probably started due to extreme dryness this time of year.  He even explained that it's good for grass to burn since when the new growth appears it's rich in nitrogen.  Since Panamanians don't seem to believe in lawn mowers, they either use large weed whackers to cut their grass, machetes or they burn the grass.

So I think we'll skip day three of Carnival, despite the fact that Monday night is the time for married men to roam free and howl without their wives.  Guess I better keep tabs on dear Clyde later on tonight to make sure he's not out getting into trouble.  Perhaps we'll venture out early tomorrow since it's Fat Tuesday.  From what we've been told, the parades and merriment on Fat Tuesday far surpass those of other days and must be seen.  Fat Tuesday is the last hurrah before the start of lent, Ash Wednesday and a period of fasting for locals.  And Carnival officially ends with the strange tradition of burying sardines in little coffins, although I'm not sure why.

As two lost gringo's, in a world of constant newness we never know what's around the next bend.  We live each day like newborn babies, discovering the world for the first time since it's all new to us.  But newness is fun and exciting, although a bit scary at times.  So we keep learning, exploring, and embracing this new world with an open mind and open arms......along the gringo trail.
at February 20, 2012