Admittedly addicted to HGTV and shows like House Hunters and Property Virgins, I love it when the perspective buyer looks at a house and makes a comment like, "oh we can just take down this wall to open up the space."  We did it in Texas where Clyde just knocked a hole in the living room wall let in more light.  But in the U.S. he was cutting through a layer of drywall, so the process went quick and easy.  Now we're in Panama, the land of cement blocks covered in even more cement on both outside and inside walls.

When we first bought the house in Chame I complained that the living-dining area was too dark since it's in the middle of the house.  It's a long room with a window on the front end only and to get more light it seemed like a good idea, to cut a hole in the wall between the kitchen and dining room.  Next time I suggest any such thing please have someone knock a hole in my head and have me locked up somewhere.

Clyde made all the plans and had it figured out exactly how he would pull this off.  Although he did make a few comments weeks ago that he hoped the roof didn't cave in when he did this, which made me panic.  But even being panicked about the prospects of a roof falling in, I still wanted what I wanted being the difficult witch that I am.  He discussed it with friends and they gave advice, but no one said it was impossible. 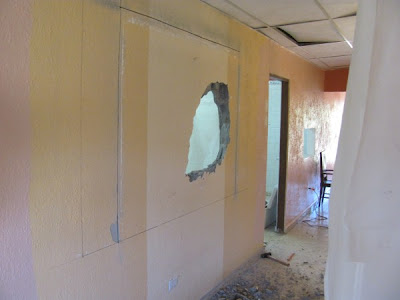 The Cut Was Made, Now The Sledge Hammer 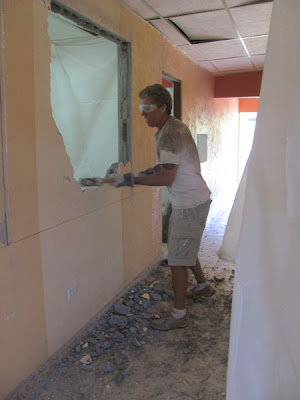 A Little Bigger
So today was the day and he began by measuring and drawing cutting lines on the wall.  He started cutting with a small angle grinder, and the blades ground down to nothing within a few minutes.  Off he went to the hardware store to buy a bigger model, which was really what he wanted in the first place but was being cheap.  Once he cut through on one side of the wall he went to the other side to repeat the same process.  Fourteen blades and many hours later, the cut was made and everything was covered in a layer of gray cement dust.  To keep things cleaner we even bought a roll of plastic sheeting and hung plastic from the ceiling to form a tent around the work area.  It helped to keep most of the dust away from the rest of the house, but it still escaped like a cloud of thick smoke. 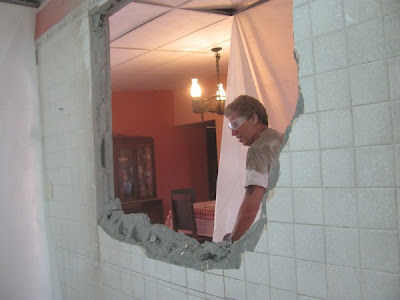 A View From the Kitchen Side 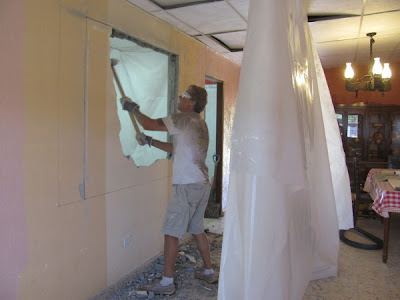 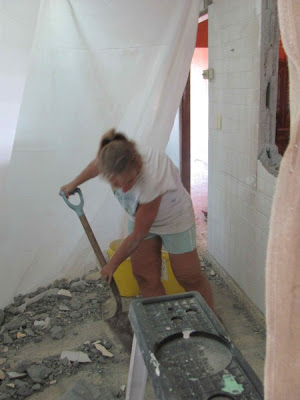 Cleaning Up The Rubble 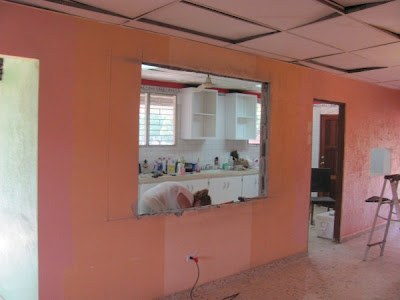 The New Opening Looking Into The Kitchen Where I'm Still Cleaning
And NO We Didn't Paint Stripes On This Wall
Once the cut was made he picked up a sledge hammer and pound his way through six inches of cement.  And if that wasn't bad enough, then we had to shovel the mess off the floor and take it outside.  The hole came out great and once it's trimmed with wood it will be a nice addition to our home.  But once I looked around the house to see the walls and cabinets covered with gray dust, I wanted to cry.  After weeks of painting and cleaning, it was now all covered with a layer of thick, dirty cement dust.  Tired and sore we cleaned up the mess, including the walls and came home to relax.  Since Clyde did most of the hard work he's hurting and tired and hopefully he'll feel better tomorrow.

Clyde suggested we grab the camera out of the car to take pictures of this memorable moment to show the world what these two crazy gringos are up to now.  Tomorrow is another day of more work, but at least the worst is over, the hole is done and the house is turning into our home......along the gringo trail.
at April 13, 2012