The walls are alive with little black dots that move and then free fall to the ground as if they have little parachutes attached to their backs.  As another rainy season begins so does the birth of millions of flying ants. Apparently these little buggers were discovered by scientists back in 2005 and are said to be the only wingless insect capable of controlled flight.  Although these ants live high up in the tropical rain forest canopy, scientists found that these ants never hit the ground.  Instead they go into a free-fall like skydivers and steer their way to the ground for a peaceful landing.  Peaceful as their landing may be our house has been anything but peaceful with my obsession for getting rid of the pesky critters.

Yesterday during our Easter socializing with friends was when we first noticed the flying ants.  As soon as the sun went down and the lights went on, the walls were crawling with hundreds of ants. So we did what any normal people would do and turned off the house lights and sat chatting in the dark.  It made it much more acceptable to snooze when the conversation dulled, until the snoring gave me away. 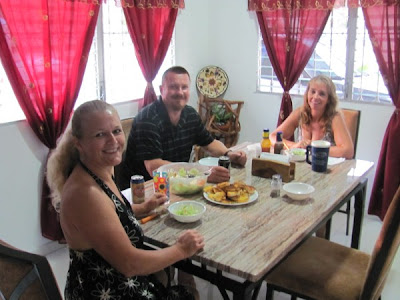 Phil and Sharon join us for Easter Dinner 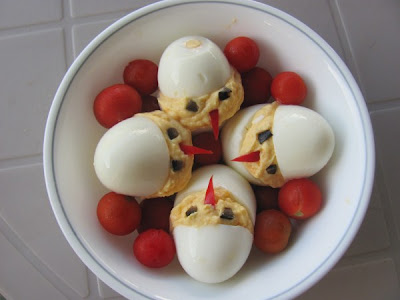 Deviled Egg Easter Chicks
Compliments of Sharon
﻿
At the end of the night I vacuumed up hundreds of ants only to find more the next morning.  Once again I sucked them up but they keep appearing from no where.  Guess we'll be sitting in the dark again tonight with the windows closed until the little darlings die off. Our friends tell us they don't last long and are just a sign that the wet season is upon us.

The wet season is also called the green season because as soon as the first rains came, everything turned green and lush.  Simply put the dry season is the time of year when there is virtually no rain at all.  During the rest of the year rain is possible and if and when it comes, it's usually in the form of an afternoon shower.  But by the end of the rainy season in November and December rain can be extremely heavy and last for hours, if not all day.  But rain is what makes the rain forest thrive and since it's so vital to mankind we have to cherish and nurture it.

More than 20% of the oxygen in the world is produced in the Amazon rain forests alone. The Amazon Basin is also home to at least one fifth of the world's fresh water resources. There are an estimated 3,000 types of fruit that grow in the rain forests of the world. In the United States, only 200 different types of the available rain forest fruits are used.

Other than ants, insects have not been a problem since we moved to Panamá.  Besides the flying ants we regularly get visits from crazy ants and usually can get them under control and then they show up again.  If we could just teach our doberman to eat ants, we'd solve the insect problem and save money on dog food too.  Until then our little bit of paradise may be riddled with annoying creatures now and then......along the gringo trail.

(Excerpt taken from...ABC Article Directory ... The Rain Forest And You:  The Benefits We Get From The Rain Forest,   written by Adrian Adams)
at April 09, 2012