From Church To Topless Dancers.......Paris Day 4

Our fourth day in Paris began like most other mornings with French coffee along with fruit and yogurt in our apartment.  While I expected to find yogurt in Greece, since after all Greek yogurt is all the rage I had no idea that the French were SO into yogurt too. We literally found aisles of the stuff in the grocery store.  Yogurt with fruit for breakfast and with candies and sweet toppings for desserts. And it was very cheap in comparison to the prices we pay here in Panama.  We paid as little as 18 cents for one yogurt and as much as 50 cents for Oikos Greek yogurt.  We pay two to three times that much in Panama since the stuff has to be imported and kept cold throughout the whole journey.

We walked over to Notre Dame Cathedral again to see if we could climb the bell towers but once again the line was long.  With too many other things we still wanted to see we gave up on that idea since this was our second attempt to climb up among the gargoyles.  Since Luxembourg Gardens was on our list of must-see's and just happened to be free, we made our way over there.  The 23 hectare park was a peaceful refuge in the middle of the busy city of Paris.  On the premises sits a palace by the same name which now serves as a government building. The lovely park was green and lush with plenty of seats perfect for resting to enjoy the serenity of nature. After a bit of people watching, looking over maps to plan out the rest of our day, and chillaxing we took off for more adventures. 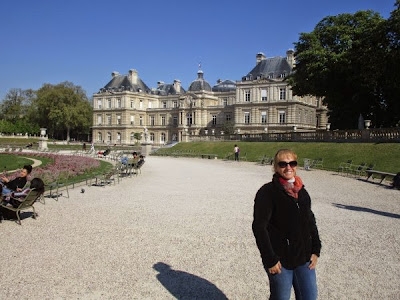 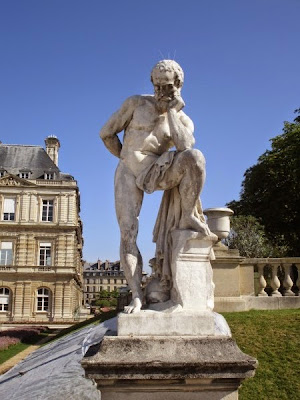 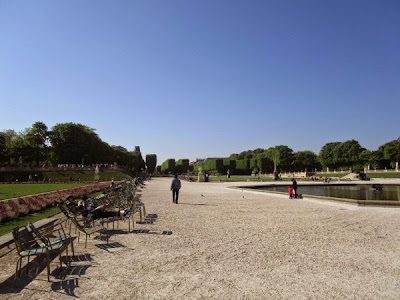 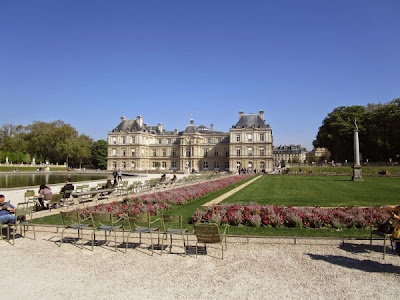 After that we headed over to the world famous Champs Elysees boulevard for an afternoon stroll. The avenue runs over a mile in length and sits between the famous Arc de Triomphe and Place de la Concorde.  The lower end of the boulevard contains a large green space which serves as home to The Grande Palace and The Petit Palace, along with a theater, monuments and fountains. Lovely as that may be I needed to stroll along the boulevard window shopping where the rich and famous play.  Among the high dollar retail were names like: Louis Vuitton, Cartier, Hugo Boss, Adidas, Benetton, Abercrombie & Fitch, Lexus, Prada, Peugeot and so many more. 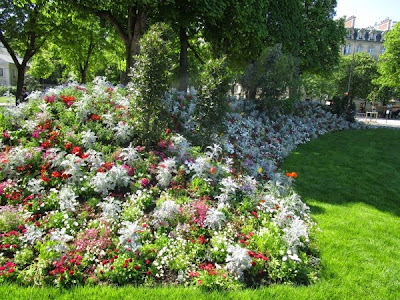 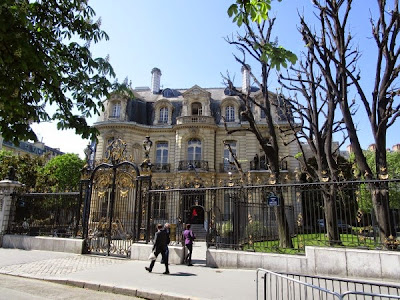 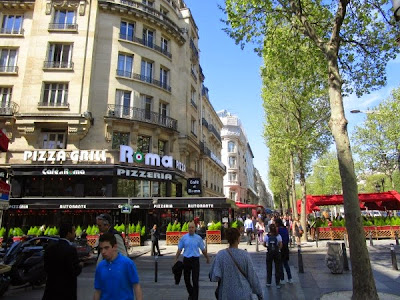 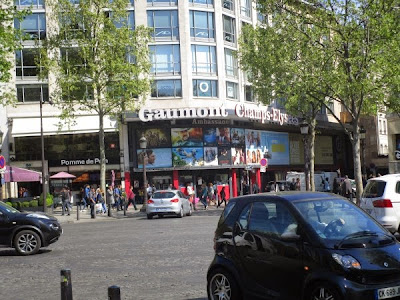 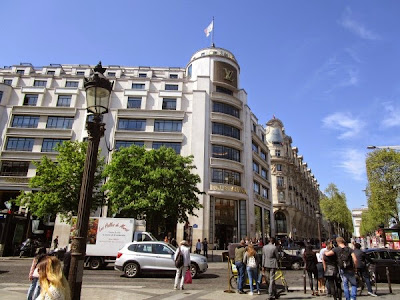 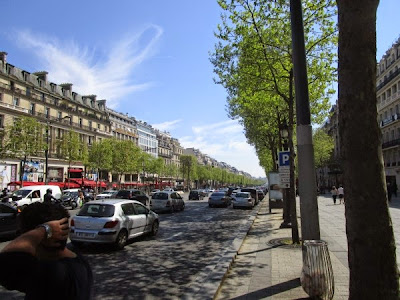 We stopped to share a sausage crepe at a nearby park before deciding on our next move.  Since our apartment was located near the famous Place de Vogues we stopped by for a look before heading back.  As we walked along the narrow, cobblestone street that led to our apartment a street cleaner passed by.  Also common were trash trucks picking up different bins for recycling.  Here in Europe we noticed that everything seems to be recycled with massive bins to hold each category. And we noticed since gasoline prices are high here, many cars were electric.  Car charging stations were commonly seen along the roadside, as were motorized bicycles and scooters. 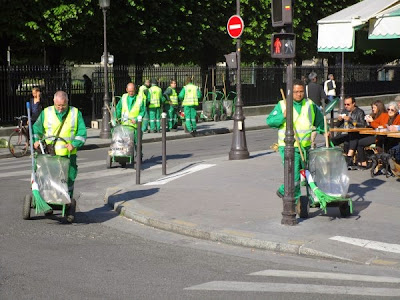 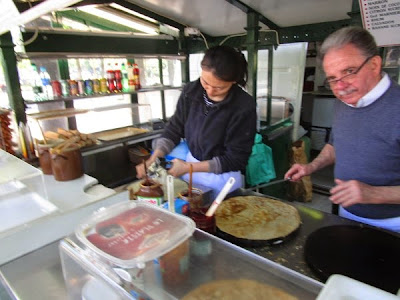 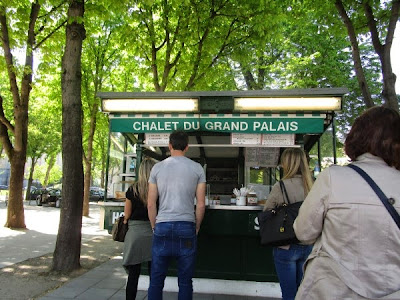 Waiting In Line For Crepes
﻿

Prior to leaving Panama for this trip we debated over and over IF we should buy tickets to see the famous Moulin Rouge.  Silly as it seems I really didn't even know the place existed until my nephew's wife posted a photo on Facebook. Of course I'd heard of the movie version but didn't realize it was patterned after the real thing that still exists today!

Since Moulin Rouge sits in the Montmartre district a bit outside of Paris, we had to plan our evening.  After resting up back in the apartment we showered and dressed up for a night out on the town. Off we headed on several Metro's to that part of the city.

At first glance Montmartre was a stark difference from Paris.  The clean streets gave way to trash that framed the rows of sex shops, strip clubs, bars and touristy shops.  The Moulin Rouge building was in front of us but since our tickets were for the 9pm show we first had more exploring to do.  As we headed up the steep hill full of shops trying to get money from tourists there it was in the distance.  A huge, white church sat perched high on the hill in front of us. It goes by the name Sacre Coeur (or sacred heart) we found our way to the funicular (or cable car) that would take us up there.  Even taking the easy way out there were still hundreds of steps leading up to the entrance to the building. After touring the church Clyde snapped a bunch of photos before we made our way down the hill again. 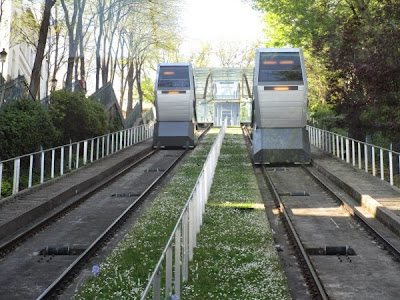 Funicular Or Cable Car Up The Mountain To Sacre Coeur 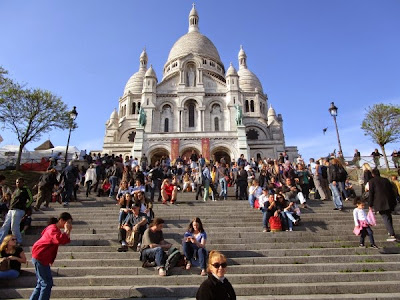 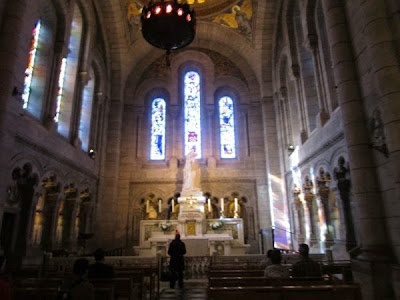 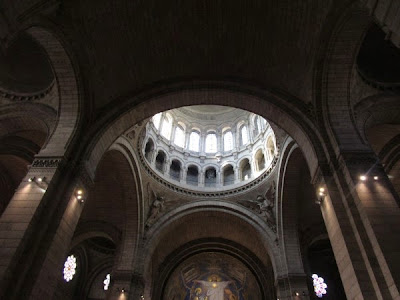 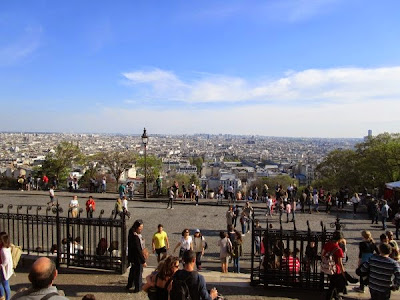 ﻿
View From The Top


Nearby were large bins of bargain priced clothing at a place known to the locals called SYMPA. When a Parisian says that something is "sympa," it means it' s great and bargains in this part of town are just that.  Early on Saturday morning huge trucks come by and dump off massive amounts of closeouts of brand name, designer stuff into large bins on the street.  Prepared locals flock to the store armed and ready to rummage through the large bins. Since we were traveling light with only carry on we certainly couldn't shop but it was fun to watch as people took advantage of great deals. 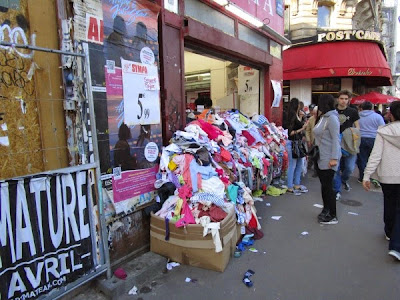 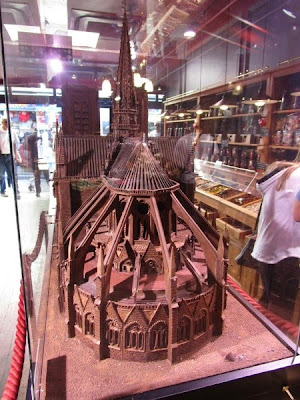 Chocolate Shop.....Yes This Is Made Of Chocolate 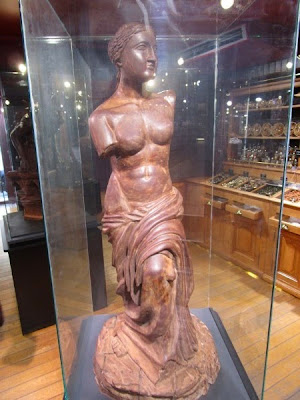 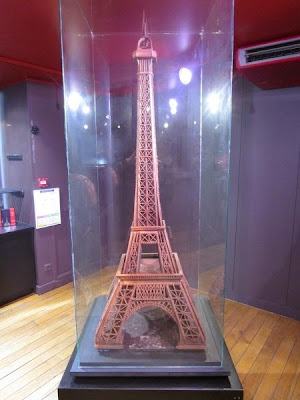 Chocolate Eiffel Tower.....Of Course We Had To Buy A Few Chocolates
﻿

Moulin Rouge (which means red windmill) can't be missed since the building sports a large, red windmill on top.  The current show called "Feerie" features 80 artists recruited world wide.  With 1000 costumes full of feathers, rhinestones, sequins, glitter and more the performers dazzle audiences with fabulous routines.  The show has a little of everything from dancing, singing, a circus act, miniatures horses, skaters and even a women in a tank of water swimming with snakes. The famous can-can numbers are done topless for a timeless display of enthusiasm that's been delighting audiences for many years. Add to that 80 musicians along with 60 singers for a spectacular extravaganza of entertainment. 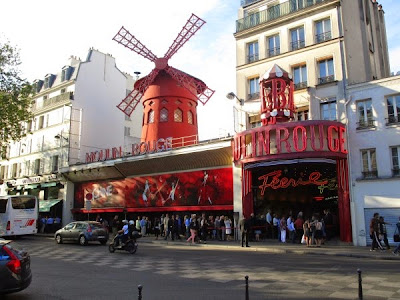 We were escorted to a table for six and placed in the front row overlooking the stage.  The white tablecloths complimented the red lamp shades that topped off the cute lamps on each table. We had stepped back in time as the walls were covered with red flocking taking us back to yesteryear.  Soon we were joined by other tablemates, carefully squeezed in tightly.  Another couple was from the US and we chatted with them in English. The third couple did not speak English an no conversation was exchanged. 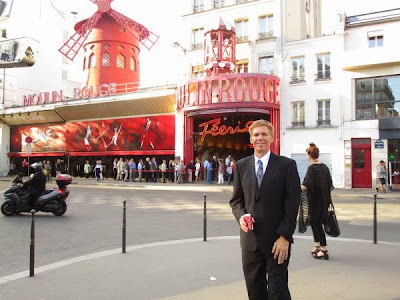 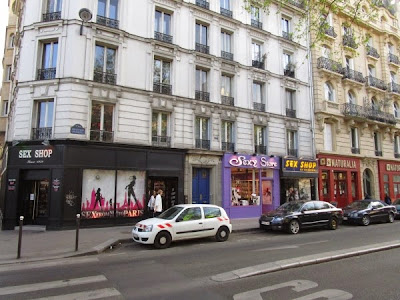 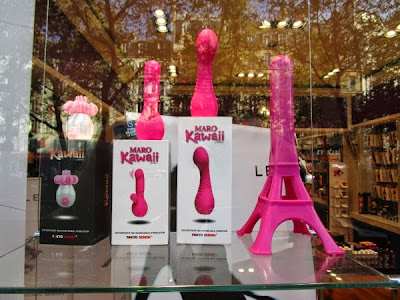 Our ticket prices included a large bottle of champagne which my husband insisted he didn't like. But before the show was over the bottle seemed to have emptied out, and surely I didn't drink it all myself. The fabulous show lasted for two hours of non-stop action without an intermission. Before leaving we both needed to stop in the bathroom before exiting the building.  As I waited in line for the ladies room before long I was heading to a stall.  I followed another lady to the end of the large room but suddenly was blocked by a window.  A lovely, blondish women was looking back at me through the window as I felt the glass, thinking "I don't know how to get out of here."  All of a sudden I realized that the image facing me was wearing the exact same clothes that I was.  Oh my, I was stuck looking into a mirror at myself, trying to figure my way out of the bathroom.  Perhaps, just maybe I'd had too much champagne?  I had to laugh after finding my way into the stall to take a leak and left the room still laughing out loud.  Fortunately for me what happens in Paris stays in Paris, unless one is silly enough to describe her faux pas in a blog for the whole world to read.

Despite the champagne we managed to find our way back to the Metro and found our apartment once again.  The next morning we packed our bags and headed to the airport seeing the streets of Paris for the last time, on this our first trip. From here we're heading to Barcelona, Spain for the next leg of our journey.  Knowing that we'll be back someday we never bid goodbye to Paris but instead used the local phrase "au revoir."  Simply put this means "until we meet again," because everyone that goes to Paris will return someday, and so will we.....along the gringo trail.