The Gaudy Smell Of Romance In A City Designed By Gaudi

The next day in Barcelona we awoke to the smell of roses and romance in the air as we were just in time to celebrate St Jordi's Day!  Similar to our Valentine's Day St. Jordi's Day serves to remember the patron saint of Catalonia Saint George. As legend has it there was once a fierce dragon who poisoned the air in the village. To appease the creature the villagers would sacrifice a virgin and a lamb to save the town.  One day George rode into town on his white horse saving the Princess from the dragon and of course becoming the hero.

Today the day is celebrated with roses along with it being the International Day of The Book.  Men are supposed to give a rose to a lady, either a lover or friend.   While she in turns should buy a book for her man friend as a nice gesture.  The book thing came into being when Spain declared the day in memory of Miguel de Cervantes.  Best known for his work  Don Quixote, The Man Of La Mancha, Cervantes is the most famous writer in Spain.  Copied from nearby England who remembered William Shakespeare on the same day it seemed like an appropriate day to remember both. Roses And Books For Sale

Barcelona was covered with stands selling roses but the most obvious was the tourist boulevard of La Rambla.  It was literally packed like sardines with tourists buying books and roses to take part in the festive celebration.  Streets were blocked off as bands set up to provide entertainment which allowed for dancing in the streets while sipping on beer and sangria.  Every female around was carrying at least one rose while many had bouquets.  I declined the need to have one since I didn't want to carry it around all day.  Later that evening on our way back to the apartment Clyde insisted on buying me a rose but didn't want me buying him a book.

The Hop On - Hop Off Bus in Barcelona has two different routes and today we took the other one.  We hopped off at Montjuic to take the funicular up to the top.  No lines today as we made our way to the fortifications on the top of the hill. The castle was impressive from the outside but empty once we went in.  It served as a fortress overlooking the city from the 17th century. 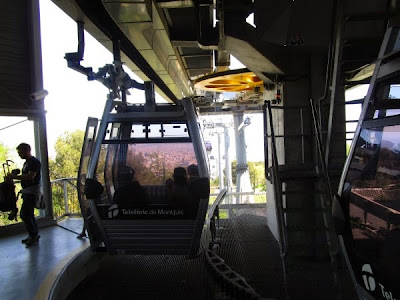 Teleferico  Or Funicular (Cable Car) Up The Mountain Of Montjuic
﻿ 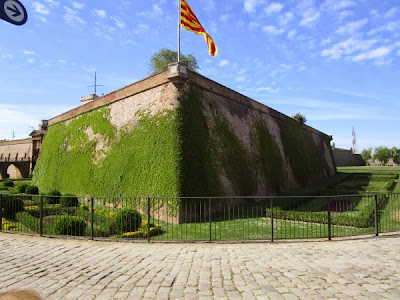 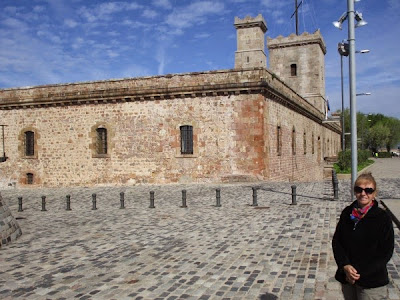 The Princess Near The Castle 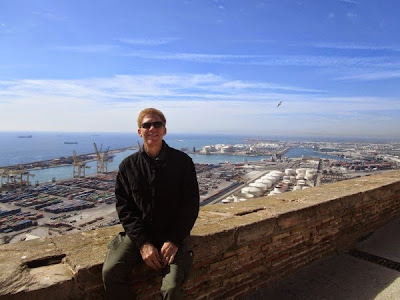 My Prince With Port Of Barcelona In Background 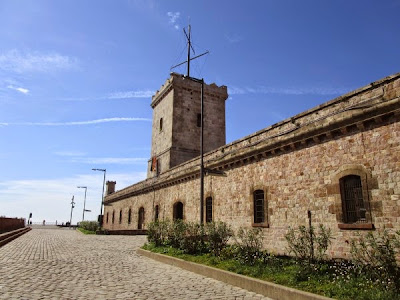 Since the whole city is full of architecture done by Antoni Gaudi we headed to another part of town to check out a few more houses.  Considered to be one of his best works Casa Batllo is a marvel that certainly can't be described in words. This massive five story house is full of whimsy, design and unbelievable creations done by the master architect.  Click on the website below and checkout the video if you can as it give a better view than still pictures. Price was around 18 euros each just to get into the house which included a free audio guide but it was one of the most amazing things I'd ever seen. Second only to Sagrada Familia, every corner, door knob, window sill, crevice and cranny of this house has been meticulously designed by Gaudi.  Each level brings to light a new dimension that culminates on the roof with a massive dragon that adds a flair of fun and frivolity. 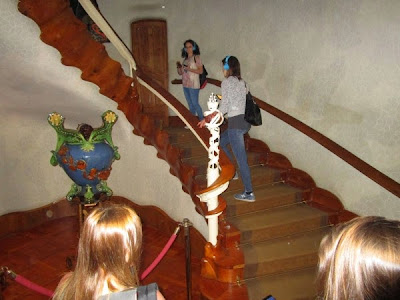 Up The Stairs Starting The Tour....Checkout Every Detail 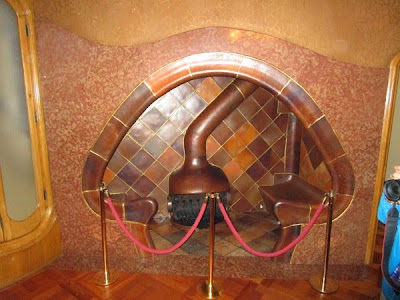 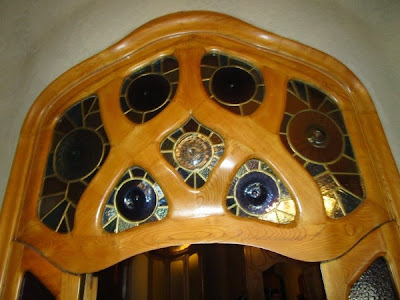 Designs Over The Doorways 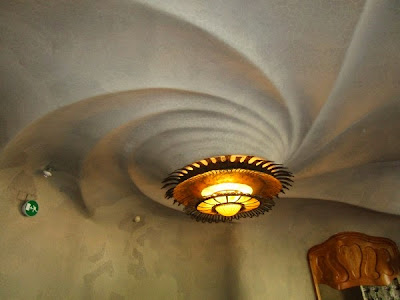 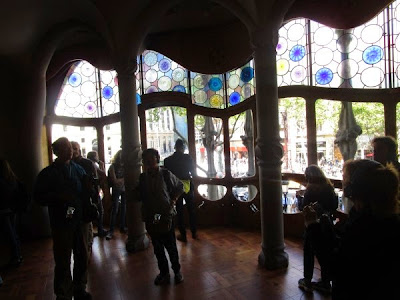 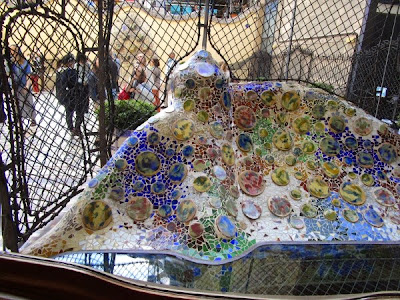 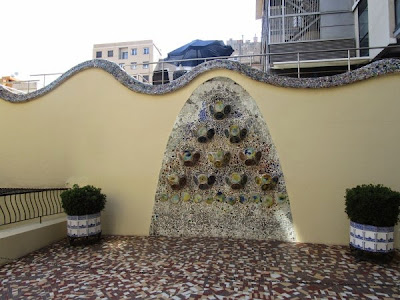 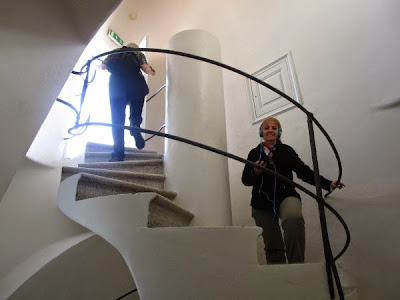 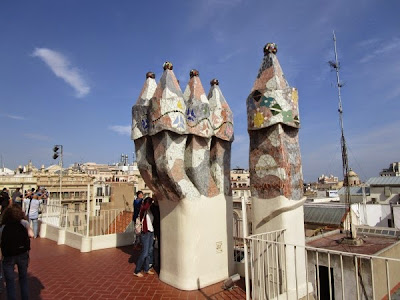 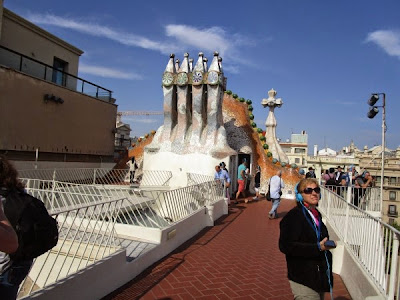 Surprise.....A Dragon On The Roof 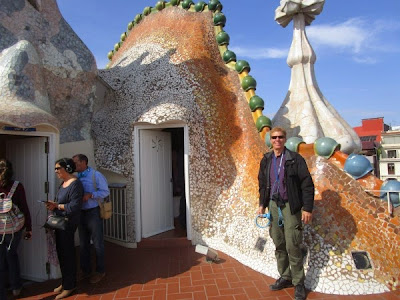 
We hopped back on the bus to view some other sights like Arc de Triomf, built as an access gate for the 1888 Worlds Fair.  Along the way we passed by Estadi Olimpic Lluis, originally built in 1927 for an International Exposition.  After Barcelona's bid for the 1939 Summer Olympics was given to Berlin, the stadium sat unused until it was later renovated for the 1992 Summer Olympics. A brief stop at Poble Espanyol, a life-sized open-air museum of 117 buildings representative of what buildings in the rest of Spain look like. 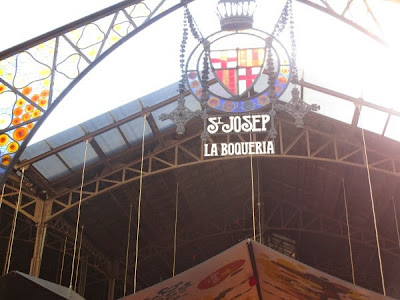 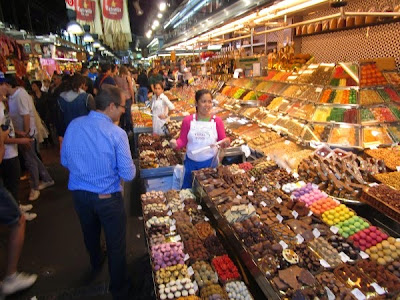 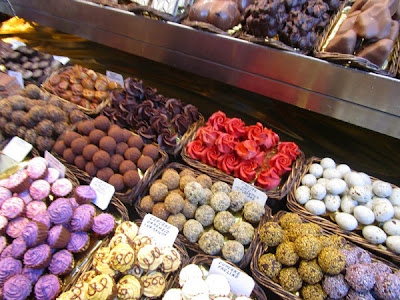 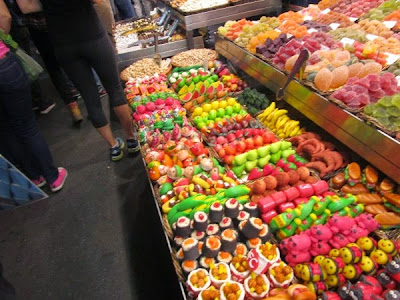 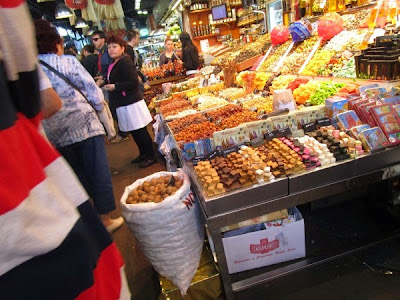 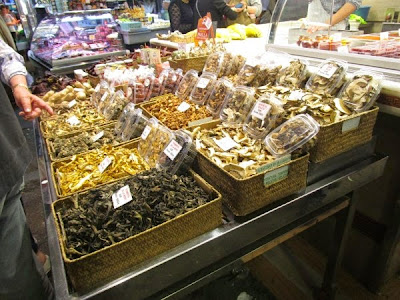 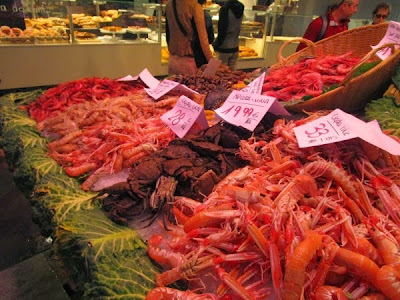 Back to La Rambla we strolled along the shops until stumbling upon La Boqueria. Dating back to 1217, La Boqueria is a huge, public market full of produce, sweets, meat, poultry, fish, nuts, and restaurants just to name a few.  Amazed at the colorful array of fruits and vegetables that went on for miles, I just couldn't get enough of the plump, juicy strawberries since we don't have them in Panama.  Truly a display of the Mediterranean Diet surrounded by the people that live it everyday. We just couldn't pass up the delicious selection of chocolates and picked some up to take back to our apartment for later.


﻿
Nearby the market we stopped for a bite to eat at a local pub with drinks and people watching.  After that we headed back to our apartment and dragged our tired butts up the 60 stairs to crash for the night. We polished off a bottle of wine with our pricey chocolates as another day in Barcelona came to a close.....along the gringo trail. 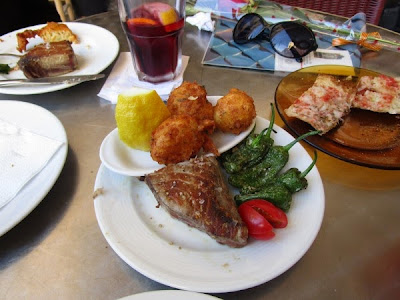