Our first "day at sea" was a welcomed blessing as we rolled out of bed around 9am and made our way to breakfast by 10. Clyde and I were now over two weeks into this trip of running around ancient ruins, climbing volcanoes, taking on thousands of steps in subway stations and putting hundreds of miles on our shoes. Usually I wake up early and hit the gym when on cruises but not this time since today I really needed to rest.  Despite how much we're eating we're not worried about packing on the pounds because we're walking so much. Even wearing a chunky money belt under my pants they're fitting loose with room to spare as I zip them up, so I think all is good. 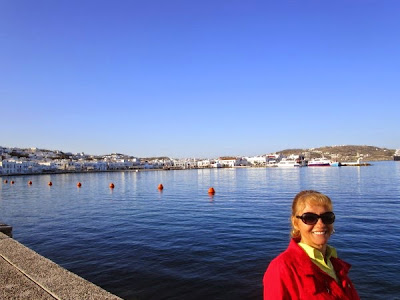 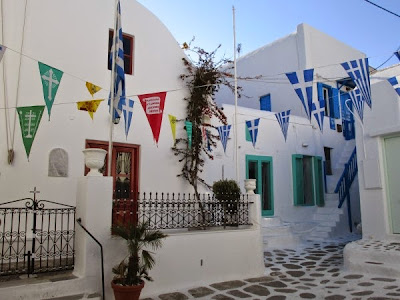 The next morning we left the ship bright and early to explore the Greek isle of Mykonos. Because the island is small this is the one port where we didn't book a shore excursion.  The cruise line offered a free shuttle bus to and from the center of the island so we jumped on for the short ride.  As we exited the bus and made out way into town some of the tiny shops were setting out their wares getting ready to open. What appeared to be a sleepy little town to us apparently comes to life after dark as clubs open and the loud music begins. 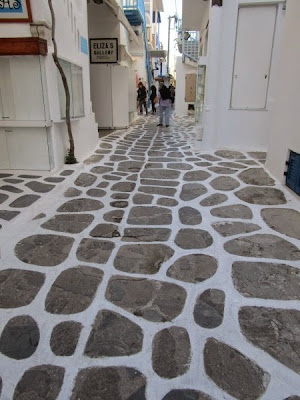 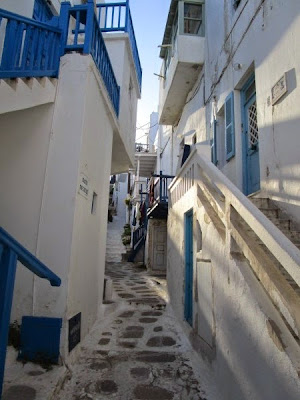 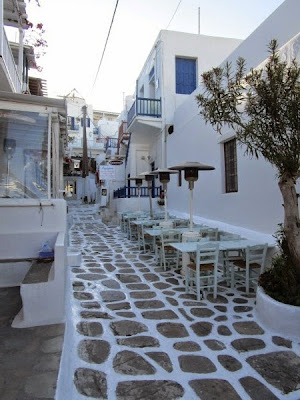 The Whole Town Looks The Same
﻿

Mykonos is one of the Cyclades islands that sits southeast of mainland Greece on the Aegean Sea. It covers an area of only 33 square miles and is home to some 13,000 inhabitants.  Known for it's wild nightlife, Mykonos is the most popular of the Greek isles that survives purely on tourism. With sunshine 300 days of the year it's no wonder this has become a haven for beachgoers by day and partyers by night. 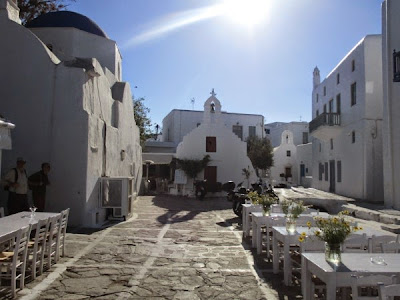 Outside Café and Church 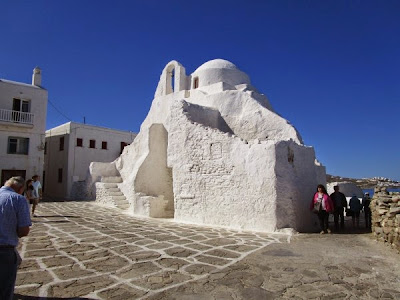 We walked around the bright white cobblestoned streets and alleyways that often left us on someone's doorstep.  The color scheme was white on white with even more white as assents. Seriously though we slipped into a coffee shop that offered free WIFI since Clyde was having internet withdrawals.  The inside was just as white as the outside with built in cement benches painted white and decorated with brightly colored toss pillows. The oceanfront bistro was built on pilings in the water in a part of the island called Little Venice.

Back to roaming the island the shops had opened for business now and sold the typical touristy items that we had no interest in buying.  Mykonos is famous for it's 16 windmills and 7 of those are perched on a hill overlooking the sea.  Built by the Venetians in the 16th century construction continued until the 20th century. They were primarily used to mill wheat and served as an important source of income for the residents until production ceased during the 20th century. 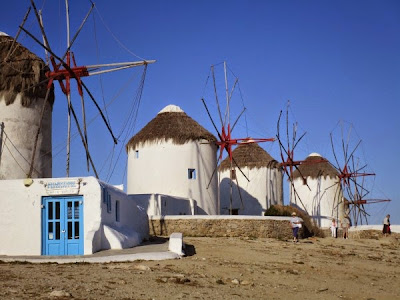 The Windmills Of Mykonos 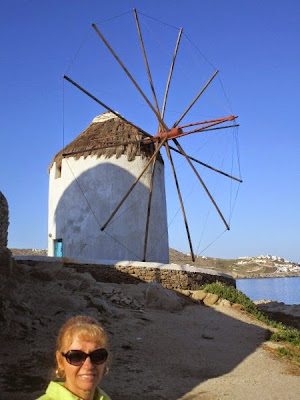 Along the way we visited a Greek Orthodox church and stumbled upon a museum.  Located in a 2-story house it was a charmingly preserved, 19th century authentic, middle class house.  Completely furnished as it would have been back in the day even with mannequins who resembled the former residents, it was a nice surprise. The man inside the house spoke English although he had a very heavy Greek accent and was hard to understand. He explained the history of the house to us as he encouraged us to explore the various rooms and even the basement. 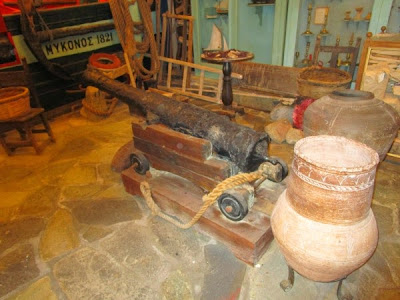 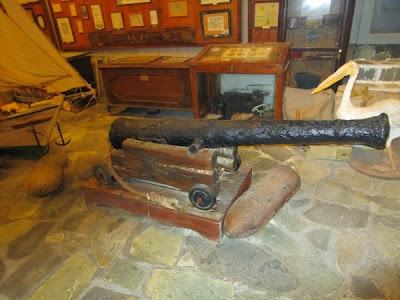 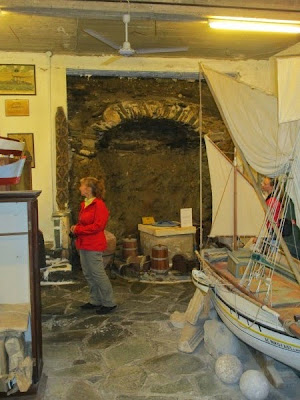 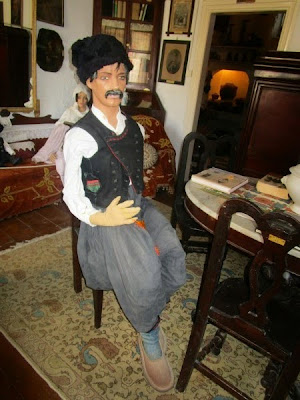 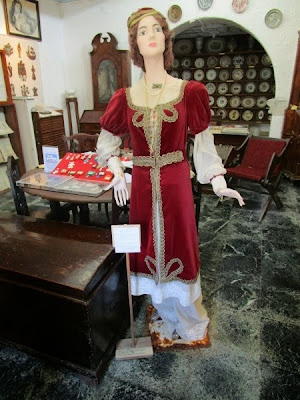 ﻿
The Lady Of The House


While still in the museum I had to ask the man why everything on the island was painted white?  His response, "because it reflects the sun to keep it cooler and besides that, it looks clean." He went on to explain that initially it was the government that enforced the whitewashed look but then the residents liked it and agreed it was better and chose to keep it that way.  But residents are allowed to add just a small pop of color to their property by painting the trim or other little parts either red, blue or yellow. 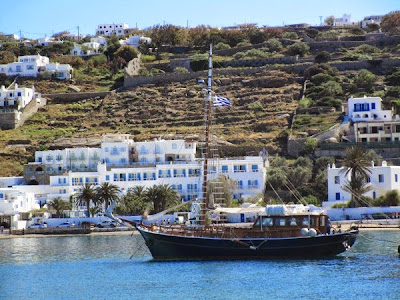 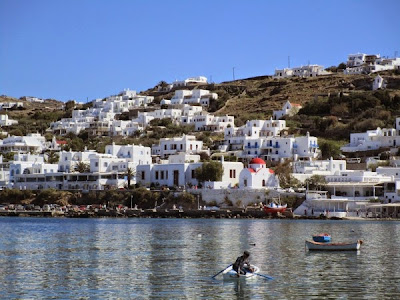 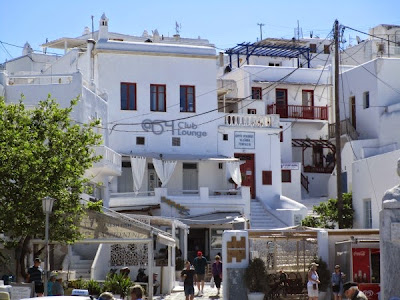 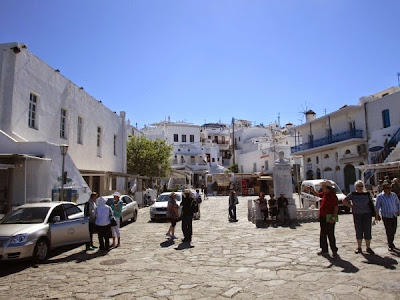 Honestly, my first thoughts of Mykonos were, "why did they bring us here?" Since we're the kind of tourists that like to keep going with sightseeing this didn't offer much in that way. Perhaps we should have been ready with bathing suits and snorkel gear to explore the lovely sea with it's clear waters? Yet Mykonos does have a special charm all it's own.  It's one of those places where there's nothing to do but the beach and each other.  A place where one can blend into the whitewashed walls and become almost invisible, or drink the night away welcoming the sunrise over the Aegean Sea 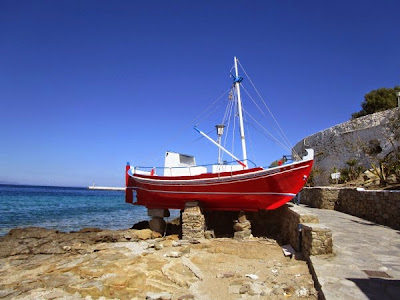 .Sailboat On The Beach

Since today was only a half day in port we made our way back onto the ship just in time for lunch.  A special Greek themed barbeque poolside featured kabobs, pita bread, Greek salads and baklava for dessert.  Later a 3pm matinee performance by the cruise staff offered up a hilarious variety show that ended with the staff spitting water at each other.

Chillin' for the rest of the night we took it easy and rested up for our next port of call.  Tomorrow we'd be docking in Istanbul, Turkey for a long, active day in port as we explore more.......along the gringo trail.