Talking Turkey In The Tropics.....

After spending another Thanksgiving Day in the tropics we realize just how much we have to be thankful for, especially for our wonderful new life here.  On Thursday we kept things quiet and hung out at home with a few friends.  Our Panamanian friend Betsy stopped by with her daughter and chihuahua Udo.  It was funny to watch a tiny male dog befriend a large female dog.  Udo chased Venus around our property like an annoying little brother.  Venus seemed to enjoy his company for the most part, but eventually tired of the attention and almost sat on him when she decided to sit for a spell.

After they left our friend and neighbor Daniel showed up for dinner.  Clyde baked a chicken stuffed with an apple and onion.  For sides we added green beans cooked with onions, ham and garlic, stuffing, mashed potatoes, gravy, and cranberry sauce along with turtle brownies for dessert. After dinner we relaxed with a few cocktails on the terraza.

Yesterday we were treated to a traditional Thanksgiving, potluck at the home of friends Jennifer and Dan in La Chorrera.  Although everyone was supposed to bring a dish to share, hostess Jennifer cooked for days before the big event.  She made four or five turkeys, and many pies along with several side dishes too.  Over 80 people showed up to share this wonderful time together and reminisce about the past year in Panamá.  With plenty of food to tickle our tastebuds, we feasted on an assortment of foods, desserts and cocktails.  It's  always fun to re-visit the lives of old friends that we haven't seen in a while, and also to make new ones.  Jennifer and Dan's large home was big enough to host that many attendees both inside and out so that it never felt crowded.

﻿
Some of the folks at Jennifer and Dan's Party

Before dinner was served all took part in a quick blessing along with a performance by a man playing the bagpipes.  What a fun addition to this joyous celebration of life surrounded by friends from all over the world.

Since we had to bring a potluck dish I thought it would be fun to try my hand at an "Edible Arrangement" made out of fresh fruit.  Fashioned to look like a basket of flowers the fruit is cut into shapes of flowers and leaves.  But since these things never go as planned I did have some mishaps along the way.  The honeydew melon that I bought turned out to be a small watermelon, which is too watery for this type of arrangement.  Strawberries aren't native to Panamá and the ones we bought weren't too good.  They looked old and wilted but I slipped a few into the arrangement anyway. So I had to improvise with different types of fruit instead of what I had originally planned but it turned out rather well.  But putting it into a cooler and traveling an hour with it took it's tole and some of the flowers had slipped down or broke off on the way.  Next time I'll have a better idea of what types of fruit to use to make the thing look even better and stay together too. 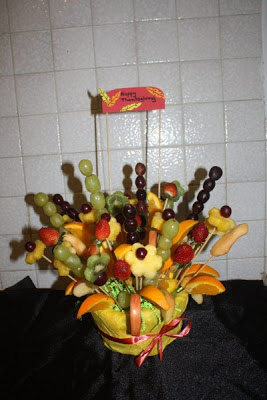 Today we give thanks to our new life in Panamá with our many new friends. We're so blessed with our good health, our wonderful marriage as partners in adventure, and all those that have come into our lives to make it what it is today....along the gringo trail.