Yesterday we were relaxing in our bohio with two blog followers visiting from Florida thinking of retiring to Panama when our strange dog went a little cooco for coco.  Out of nowhere Venus our Dober-woman picked up a coconut off the ground and hauled it to other side of the bohio.  While bracing it with her paws she began to gnaw and chew at it like a toy.  Since Venus is not a dog that plays with toys we thought maybe she considered it something to chew on like a bone. First she removed the hard outer shell, then ripped off the fibrous layer, shredding it into pieces all over the lawn.  Finally she found the soft spot on the inner shell where they "eyes" of the coconut are and nipped a hole to the inside.  Somehow she managed to tip the thing up enough to suck out the coconut milk and when she was finished she ran by the four of us with white milk dripping from her mouth.  We were surprised as we had never seen her do such a thing.  Our visitors were long time dog lovers and said they had a dog in Florida that did the same.  Here are some photos of what was left of the coconut after Venus tore into it.  Perhaps she was taking out her frustrations after a tasty lizard that she caught got away?  Or maybe just something to do on a hot summers day when she had a craving for coconut milk....along the gringo trail. 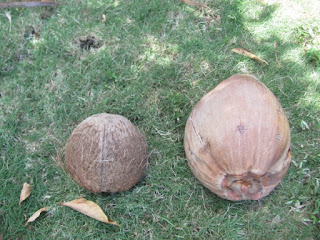 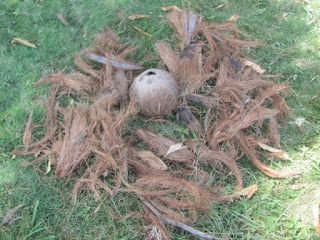 This is the husk material she took off 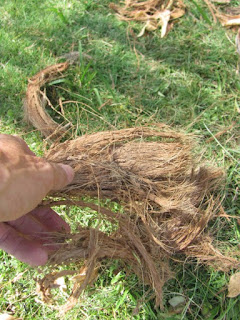 Close up of the husk matieral 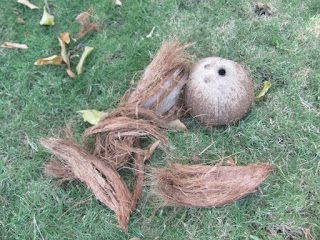