Colorful Explosions In The Sky.....

It began around 11:45 pm on New Years Eve in Panama City.  We watched from the rooftop terrace of our hotel El Parador after cooling off in the rooftop pool.  And then precisely at midnight the sky around us exploded into a kaleidoscope of color.  Loud explosive, rainbows of light filled the night sky, enveloping the metropolitan skyline with sparks.  The colorful bombs were bursting from everywhere.  They were shot off from balconies in highrises, the street below, rooftops and boats.  Our heads were spinning as we took in the panoramic spectacle of color, not knowing where to look first. The constant pounding of explosive fireworks, one on top of the other that went on for an hour or more.

This small video shows how
Big the fireworks were

This one of poor quality shows
fireworks from different locations

Since we found our way to the rooftop early for a swim we secured a table and chairs for our stuff.  After all what's New Years Eve without a few drinks so we brought a small cooler, a few bottles and some snacks.  A few minutes before midnight a young woman wearing the tiniest shorts ever with high heels, walked up to our table.  She pushed over our stuff and spread out six or more plastic cups while her husband opened a bottle of champagne.  We were standing a few feet away and I told Clyde to go say something.  As we walked over to our table the young man with her reached into our bag and pulled out our bottle of rum.  Fortunately, the floozy in the short shorts stopped him and she did say "perdone" to us in Spanish.  We offered them two of the four chairs but held our ground as to the rest of the space which we claimed as ours.  This young couple had several kids with them along with an older man that must have been one of their fathers.  The seemed to be speaking German to each other and one of the kids screamed in German throughout the evening.  Eventually they went away and we found some visiting gringos to chat with, after the fireworks ended.

Our bodies made their way back to the room and into bed around 2am.  We put in our earplugs to protect our sleep from any further fireworks or other sounds of partying.  As tired as we were we slept well until 8am when the hotel chamber-maid pounded on the door.  Even in the higher priced hotels here, the staff wants to get in and clean the rooms early, and they're pushy about it too.  After a knock or two they put their key in the door and try to come in.  Clyde yelled to her and told her to come back later.  So about an hour later she knocked again but this time he told her "two more hours."  The hotels here don't seem to have those "do not disturb" signs so common in U.S. hotels but I think we need to make our own and take it with us next time.

On New Years Day with businesses closed and the city so deserted, it was a good time to explore.  Clyde wanted to find this park he'd read about and found it without much fuss.  Omar Torrijos Herrera Parque Recreativo y Cultura, started out as Panama City's first golf course in 1940.  Today it's a premier spot for fitness buffs and families to enjoy. The park contains miles of trails for walking, jogging, biking or even rollerblading.  With a  baseball field, soccer field, tennis courts, swimming pool, go carts and children's playgrounds throughout, it offers something for everyone.  It's also home to the country's largest library along with a religious shrine.  Snow cone vendors were scattered throughout the park and food vendors lined the entrance.  The park was nicely decorated for Christmas and it would have been lovely to see at night, with all of the lights turned on. 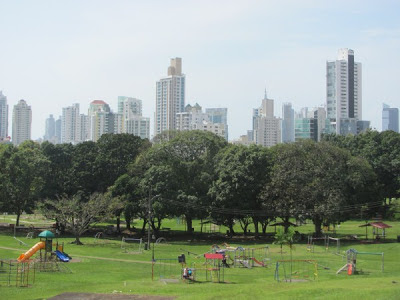 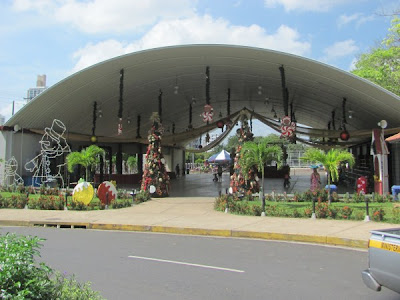 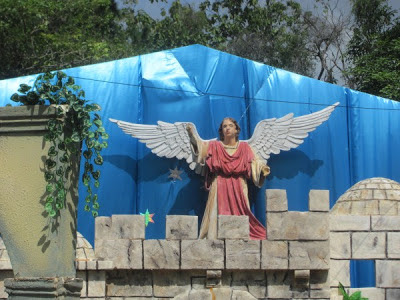 The Angel above the Manger Scene 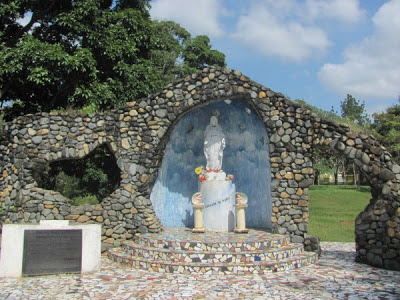 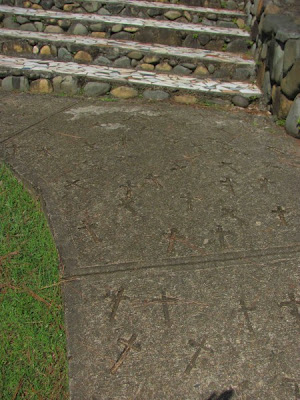 As we drove into Panama City earlier in the day, the streets were filled with an eerie silence.  The usual grid-lock, bumper to bumper traffic scene was non-existent.  Just a few stay cars on the roads here and there made for a pleasant drive.

We drove through the city of La Chorrera on the way to Panama City and stopped at a grocery store. Lines were long and snaked through the aisles to the back of the store. Quickly we decided we didn't need anything that badly, since we only wanted a few snacks for later that night.  Another store along the way seemed less packed so we stopped for a few things.

My impatient husband found the shortest checkout line and planted himself in it.  Just as he was about to put his few items down on the conveyor belt, a Panamanian woman walked up from behind with a cart full of groceries.  She joined up with an elderly women, perhaps her mama, that was apparently put in the line to hold her place while the daughter kept shopping. Clyde said something in Spanish asking her if she was in line, and of course she said "yes" with a big smile.  I could hear Clyde's blood boiling but he let it go and stepped back. I suggested that maybe he should tell her off in English to get if off his chest.  But some things are better off left unsaid, because after all she might understand English and then things would have become ugly.

One final stop at Price Smart for a few things where the lines weren't too long.  While standing in line I noticed every Panamanian walking by with two, three even four large fruitcakes in their arms or carts.  Was the store giving these things away?  Or perhaps fruit cake was a necessary item to have to ensure happiness in the New Year?  So I went over to the table nearby that store clerks were filling with fruit cakes.  The store employees barely had time to  put the price stickers on them and put them on the display table before customers grabbed them.  The price of $5.49 seemed reasonable so I picked up a cake to buy.  As I walked off with it, I realized the bottom still felt warm like they'd recently come out of the oven.  The smell of fresh baked, warm fruit cake crawled out of the container and into my nose.  I convinced myself that eating healthy would not be on the agenda for tonight, since after all it was a holiday.  But then again this cake contained dried fruit which surely must give it some good nutritional value, you would think?

Anyway, off to the hotel where Clyde paid only $35 for the room, which included breakfast and free Internet.  The typical cost of $70 was discounted 50% with our pensionado status, a benefit that we just adore.  After getting settled and relaxing for a while, we went out looking for dinner.  Not sure that anything would be open in what looked like a ghost town, I thought for a minute we might be eating fruit cake for dinner.  But there were a few restaurants nearby open and we enjoyed an Italian dinner at Pomodoro, a well known place around these parts.

After leaving the tranquility of Panama City, something quite uncommon here, we crossed the bridge into the interior.  Usually traffic slows down once the city is behind us, but today being New Years Day was different.  Since we live near the beaches we drove in heavy traffic all the way home.  This is the beginning of summer, school vacations and family outings.  Traffic on the highway this time of year is usually heavy as the locals head to their weekend homes near the beaches and mountains for family fun.

We made it home by early afternoon just in time for some lunch.  An afternoon nap was needed after being up so late the night before.  I enjoyed some alone time in the hammock outside while Clyde crashed in a recliner inside.  Another holiday comes to an end as we get back to life as usual....along the gringo trail.
at January 02, 2013