In our working days, Labor Day for me was just another day off that usually involved a long weekend, which made it even better.  For Clyde being that the Fire Department paid overtime on holidays, he always hoped to work them for the extra money.  Here in Panama "Dia del Trabajo" was supposed to be on Wednesday but President Martinelli moved it to Monday so that the workers could enjoy a three day weekend.

The sound of music and fireworks were in the air last night as we shut the windows and put on the air conditioner for a good nights sleep. The one and only highway through the country is packed with city dwellers packing the beaches for some much needed rest and relaxation with their families.

On Saturday we hit the road and headed in the opposite direction of the crowds to Chappala, on the other side of the city of La Chorrera.  Friends Fred and Linda had an impromptu get together at their stately jungle hideaway for a group of friends.  With a nice array of food, drinks and snacks we gobbled away the afternoon chatting with old friends in the picturesque setting of their property.

We headed home toward evening just in time to hit more of the city traffic headed to the beaches. Although traffic was slow it was at least moving and we made it home in time for our next outing.  After a quick shower and some sprucing up we headed over to Coronado to rock the night away to the sounds of INVICTA. 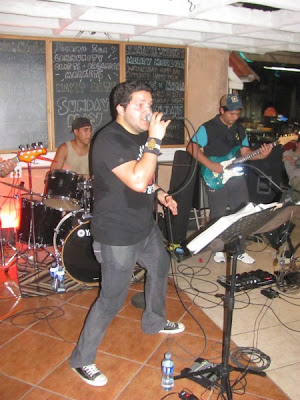 Music is one of those loves that we all seem to share since it transports us back to the yesterdays of our youth.  INVICTA is a well-known rock and roll band out of Panama City that sings in both Spanish and English appealing to expats and locals alike.  They packed the house at Picasso's Bar and Restaurant, a popular expat hangout near the beaches of Coronado. We did some Swing dancing, swaying, gyrating and belly rubbing to the music as the night progressed. I even brought my drivers license this time just in case we came across any police stops on the way home, but of course we didn't.  As usual we had a fun night out enjoying the company of old friends and making some new ones along the way too.

But we won't be sad when we realize that today is the last day of our long day Labor Day weekend since we have no jobs to return to.  Instead we'll appreciate the life we've made for ourselves here, even with its ups and downs it's a whole lot better than any day at work.  Thankfully we'll celebrate a time of not working anymore yet still being young enough to enjoy life....along the gringo trail.