Check Out My Bottom In The Kitchen.....

The bottom cabinets for our new kitchen are in along with a dishwasher, garbage disposal, new sink and granite counter top.  A few days ago we drove into Panama City to buy a new stove to complete the look.  I wanted one with two oven racks since most ovens now come with only one.  Clyde wanted a griddle on top and we both thought a broiler would be a nice touch too. We found what we wanted at Panafoto, a large electronics store similar to Best Buy in the states.  Since they only had the stove as a floor model, the clerk offered us a discount which we gladly accepted.  The original price of $589 was marked down to $500, a great deal for a nice Whirlpool gas range.  While we were paying someone was wrapping the stove in plastic since it didn't come with a box. He wheeled it outside to our Rav 4 and helped Clyde slide it into the back.

Since it was late when we arrived home we left it in the car overnight and took it out the next day only to discover that one of the black burner discs was missing.  We searched the car over and over again and looked around outside and inside for the round, black thingy.  Surely it had to be here somewhere?  Perhaps it fell into the stove somehow so we tipped it up on it's side and shook it hoping to hear a rattle, but nothing.

Yesterday again we made the long 90-minute trek into Panama City to explain our dilemma.  The same sales girl was there and she remembered selling us the stove.  Clyde explained that the part was missing to the girl and a well dressed man who appeared to be a manager.  The man talked quickly in Spanish losing us along the way.  I asked him to slow down and immediately he switched to English which was even better.  He looked at the sales receipt that Clyde handed him and said "well you signed for the stove when we delivered it which means that ALL of the parts were there."  Clyde explained that there was no delivery and since it was a floor model it was being wrapped while we paid and we really didn't see whether or not all burner covers were there.  After some words were exchanged and voices raised it was determined that they did have the same model in the warehouse.  The manager agreed to give us the part, although no one in the store looked happy about it.  Having a long retail background myself, I know the store can order the part much more easily that we can.  Perhaps the part fell out in the parking lot while being loaded into the car?  We'll never know but we have looked everywhere and it's nowhere to be found.

Still searching for a venta-hood to put over the stove to pull out grease, we found one of those at Panafoto too.  Clyde asked the same sales clerk about one to which she immediately said, "no hay," which means "they didn't have one." I think at this point they just wanted to see us leave the store and we quickly obliged.  On the way home we stopped at Westland Mall to look for other things and stumbled upon a store called "Unica" that just happened to have the same venta-hood we tried to buy from Panafoto.  The price at Panafoto was $289 but the price at Unica just $200, another savings of $89.  But Clyde just informed me that he'll have to drill a hole through the cement wall to install the thing, which means more cement dust! Perhaps we can tape a box to the inside of the wall and he can drill from outside to avoid excess mess in the house?

Granite was costly in the U.S. and I've never had granite counter tops.  Here is Panama granite is cheap and I assumed that it was a durable, easy to care for surface, but apparently that's not the case.  I began to research it only to discover that it's supposed to be sealed yearly and polished weekly to avoid having liquids sinking into the stone. We did manage to find a spray on sealer and polish so hopefully that will take care of the problem.  I don't like the idea that we'll have to be on alert constantly worrying about stains on the counter top.  But since granite is a natural stone what happens to it in the raw when rain gets it wet?  Does it stain and leave water marks?  The same is true of a leather couch that can possibly fade in the sun.  Does the cow standing in the field all day in the hot sun fade?  Just some oddities of life that makes me wonder. 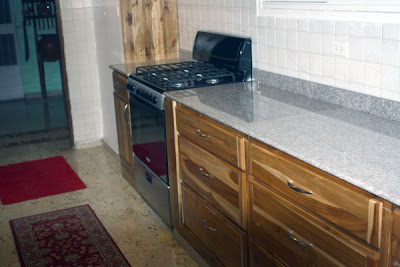 Another shot of the stove 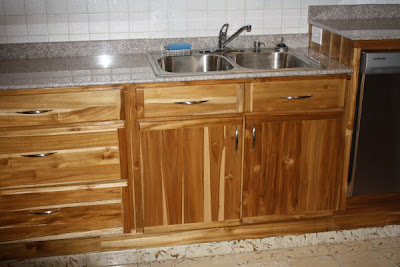 
The total price to purchase 24-feet of granite was around $320.  Although it's not one of the thicker cuts it should still be adequate for normal kitchen use. By remodeling the kitchen himself Clyde spent around $2000 for the project, much less than if he'd had someone doing the work. And a note about Panafoto is that they've always treated us well and that's why we specifically went there for the stove.  When we first moved to Panama we bought all of our appliances there since they also offered an outside delivery service. We even bought a small 19-inch television to use while waiting for our stuff to arrive from the states, way back when.  After two weeks the TV stopped working and Panafoto had their service department look at it. After they determined it was not repairable they replaced the TV free of charge. And the store at Albrook Mall has several English speaking managers which can be helpful too, especially to newcomers.

Still left for Clyde to finish in the kitchen besides installing the venta-hood are to build upper cabinets and cover the two existing floor-to-ceiling pantries with teak and build new doors for both.  The bold new look of teak is a warm welcome to everyone entering our home.  It certainly adds much value to this old house and will serve us well for many years to come....along the gringo trail.
at April 19, 2013