During the course of every marriage there comes a time when the wife wants to beat on her husband and what better time then now?  After all being together 24-hours a day, seven days a week, 365 days a year can be trying on some couples, but us?  I've always said this is not your grandma's retirement we're living here, so why not learn some down and dirty street fighting.  Yes, Israeli street fighting has come to Panama in the form of self defense classes


Ever wonder what you’d do if you were assaulted or attacked by a criminal?  Would you know how to fight back to defend yourself or would you just kiss your belongings good bye?  No matter where we live, how old we are, or what kind of shape we’re in, everyone needs to have a plan so we don’t become the victim.


Although it sounds a little bizarre, the art of Israeli street fighting has come to the area to help us turn our bodies into lean, mean, fighting machines.  It’s called Krav Maga and was originally developed to teach the Israeli Defense Force how to fight.  The name in Hebrew means, “contact combat,” and this form of self-defense is based on real world situations. Using basic moves like punches, kicks, chokes, holds, grabs and pressure points on the body students are taught to turn fear into aggression.  By practicing the moves over and over the body builds muscle memory and instinctively reacts when confronted with danger.


The classes are taught by Richard Hamilton, a 6th Degree Black Belt, TaeKwonDo Master and Certified Krav Maga Instructor. Having spent the last 47 years studying, competing and perfecting his craft, Hamilton first became interested in martial arts training before the age of 20. He fell in love with the sport the first time he walked into a studio owned by well-known karate expert Chuck Norris, who became his first instructor.  After taking a 15-year break from competing in TaeKwonDo, in 2006 his sons who also compete in the sport talked him into doing one more competition.  It was there at the Fifth-Degree Male Seniors Tournament Of Champions held in Little Rock, AR, that Hamilton succeeded in winning one last time.  He proudly won all three events walking away with the coveted Triple Crown.  His “never stop fighting” attitude has gained him all but a few wins throughout his competitive career in martial arts.  Hamilton, now 68 is a force to be reckoned with that enjoys sharing his knowledge with others. 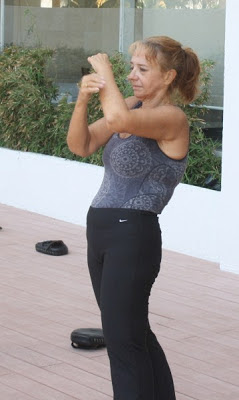 By participating in the local self-defense classes students gain self-confidence, agility, develop reflexes and cardiovascular stamina.  “Classes are ongoing and students are invited to join in at any time since I always review the techniques,” says Hamilton.  The philosophy of Krav Maga is to avoid confrontation if possible, but also teaches students how to fight to the finish as quickly as possible when necessary. It builds on the concept of maintaining awareness at all times, make a mental map of escape routes, look around for everyday items that can serve as weapons, make eye contact with those around and don’t look like a victim.  But in the event that an assault does occur the victim knows how to counter attack at lightning speed, causing bodily harm to the assailant within seconds. 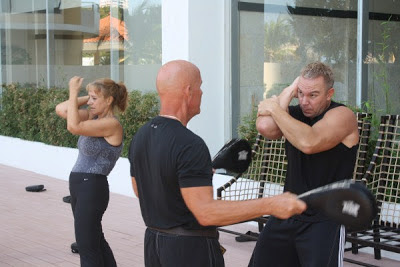 “Our classes fit everyone, regardless of size, age or fitness level,” says Hamilton. Each class begins with stretching to avoid injury to the body, and then progresses to some cardiovascular conditioning.  Then a review of the basic moves taught in an easy to follow format, one move at a time.  Students are taken through a series of jabs, punches, kicks, grabs and holds practicing on each other until it feels comfortable.  “Kicks are kept low at first for those with knee problems, and everyone is encouraged to perform at their own fitness level,” said Hamilton.  “Those looking for a good workout can get one,” Hamilton explained, “but those that can’t do as much don’t have to.”


Before studying martial arts all over the world, Hamilton worked as a singer and dancer in Las Vegas.  He also served as a Special Division Narcotics Officer working undercover for the police department.  At one time he ran an air charter company and even served as a bodyguard for Oliver North.  He turned his love for martial arts into a business and ran a dozen or so studios and fitness centers before retiring.
A good way to get in shape and stay safe, we've tried one "beat up" session so far and perhaps there will be more? Just a kickin' and a screamin' here in Panama....along the gringo trail.