Our new kitchen is finally done, after months of hard work, sweat equity and hard labor.  First there was the five months or so waiting for the wood to dry and arrive from the other side of Panama.  Then the demolition of a 30-year old cement counter top to be ripped out and bashed to pieces.  And finally the installation of custom-made, solid teak cabinets designed by my personal carpenter Clyde.  Topped off with granite counter tops that Clyde managed to manhandle by himself for the most part since I could barely lift one end to help him.  His arms were so sore after days of lifting granite that he literally couldn't lift his arms for the rest of the night, although did manage to lift them enough to eat (and drink a few Rob Abuelos con Coca Cola). 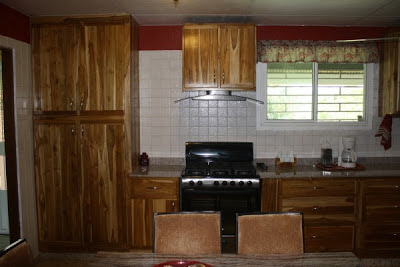 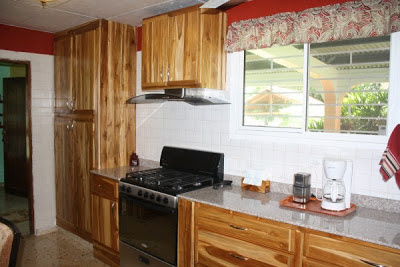 And since I insisted on adding a dishwasher that caused more of a dilemma to the mess.  The bottom of the old counter top sat on about six inches of solid cement that we chose not to remove.  And since the dishwasher sat up higher than the rest of the counter Clyde decided on a split-level counter to accommodate it.  It works out well for him since he's over six foot tall so the higher level has become his work space and the lower level mine. 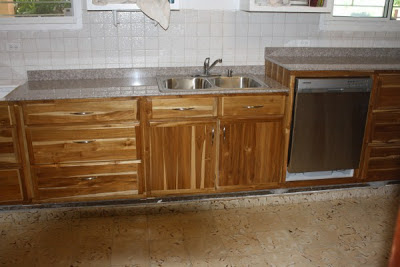 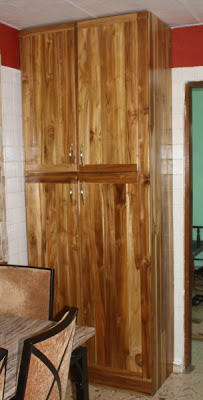 A new stainless sink replaced the antique dirty white porcelain one that I absolutely hated, along with a garbage disposal. And a new six-burner gas stove replaced the old one that we'll put outside under our bohio.  That way we'll have an oven outside too for those hot days when we don't want to heat up the house, which is everyday here. 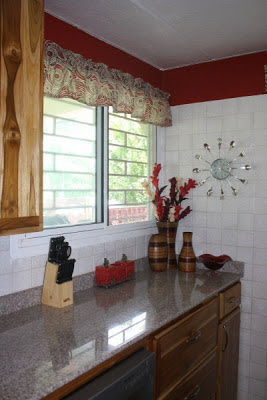 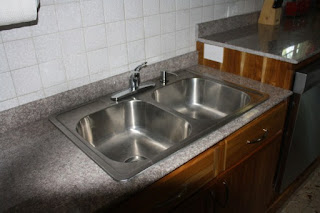 When it came time to design the upper cabinets leave it to a woman to make things more difficult.  Clyde's plan was two cabinets with open shelving in between but I had a different idea.  "Why not put a rack to hang stemware in the middle," I suggested and my loving carpenter came up with a plan.  The end result came out great and gives it new dimension. 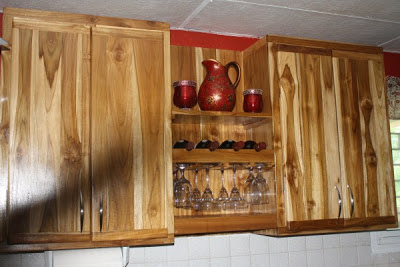 Clyde took down some old decorative border tile that ran along the top of the kitchen too.  Some texture added to paint would even out the wall and match the rest of the textured wall.  And a dark red paint added a splash of color to the room along with matching accessories and valances.  The valances were also custom-made by Clyde out of a pretty shower curtain that we found in the store. 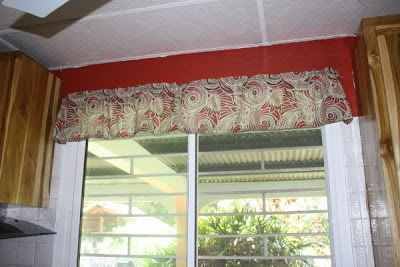 Now that the kitchen's done it's time for some well deserved vacation before he begins the next project....along the gringo trail.
at May 30, 2013