As we reminisced about the places we'd been we realized we'd seen so much, yet there was SO much more on the horizon. We'd seen Notre Dame Cathedral, soared to the top of the Eiffel Tower, strolled along the Champs Elysees, swayed along to naked boobs in Moulin Rouge and ate our share of crepes and macarons in Paris. Next in Barcelona we marveled at the whimsical yet gaudy works of Gaudi.  We watched as living statues came to life on Las Ramblas, explored castles and churches before a wet, chilly fiesta where the beer was on ME!

From Barcelona we boarded the Norwegian Spirit for a 12-night grand Mediterranean cruise.  We'll hit the tip of France before heading down to Italy.  There we'll stop in Rome, Pisa, Florence and Naples, a different port and excursion each day.  We'll head across the Aegean Sea with stops in Mykonos and Athens Greece.  From there we're onto Turkey for stops at Kusadasi and Ephesus before heading up the other side of the boot that is Italy. This wonderful yet tiring itinerary will leave us in beautiful Venice, Italy.

Follow The Arrows To See Where We're Going
Barcelona to Toulon, France, then Livorno (Florence & Pisa) Italy. Next Civitavecchia (Rome), then Naples Before A Well Needed Day At Sea.  After That Mykonos, Greece, Istanbul, Turkey, Kusadasi (Ephesus) Turkey and finally Athens, Greece. Another Day At Sea Before Docking In Venice, Italy Where We Disembarked The Next Day.

It was around noon that Saturday as we made our way on board and headed to our room to drop off our bags. Surprisingly, our ocean view cabin was already cleaned and waiting for our arrival.  But Clyde was hungry and insisted that we head directly to the buffet to try out the food. Outside of Raffles Buffet we were greeted by a crew member with a spray bottle of hand sanitizer.  He loudly welcomed us with the words," washy washy.....happy happy," as he sprayed our hands.  Later we realized this was phrase we'd hear for the next two weeks each and every time we went to Raffles.  But it was after all to OUR best interest to keep the germs away and have a healthy, happy cruise! Once our bellies were full we went to explore the ship learning our way around the floating hotel.

A while later we headed back to our cabin to unpack and get settled in.  Since we were both traveling light with just carry-on there was plenty of room to fit all of our clothes in the closet and drawers with room to spare. The rather large bathroom was in three sections with a water closet (toilet area), a middle section with the sink, shelves for storage, and hairdryer, and then a large shower with dispensers of body wash and shampoo. 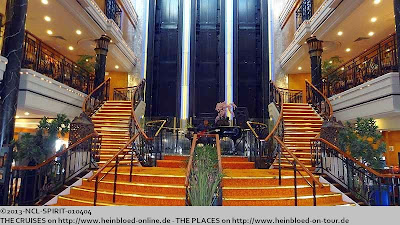 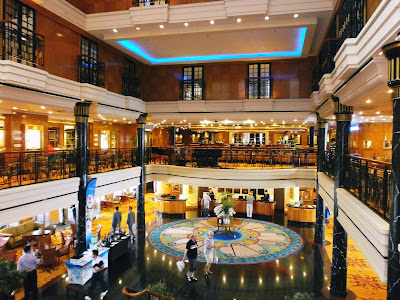 Norwegian Cruise Lines is known for freestyle dining which allowed us to show up anytime we felt like eating wearing anything since the dress code was casual. Later that night we enjoyed dinner at "Windows" the main dining room which features floor to ceiling windows overlooking the aft of the ship. We were seated in front of large windows allowing us to bid farewell to Barcelona as we sailed away from the port. 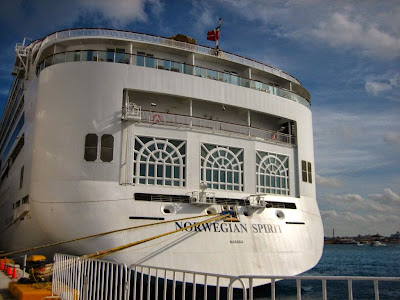 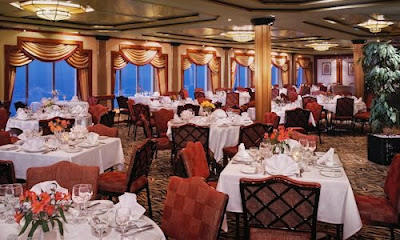 Where We Dined For Most Meals

A variety show entertained us that evening before we called it a night.  Tomorrow would be an early day as we docked in the port of Toulon, France.  We booked a shore excursion that would take us to Marseilles, and Aix en Provence, France. Ready for more fun and adventures on the Mediterranean as we sail away......along the gringo trail.