When In Rome......Visit The Colosseum & The Vatican

As we stood in front of the massive, majestic structure chills ran down my spine and I had to remind myself that I was really here.  Here we were in front of the iconic symbol of Rome, the Colosseum. Built in 72 A.D., the Colosseum is the largest amphitheater to have ever been built in the world  and is Rome's most popular tourist attraction. This modern marvel once hosted games that matched man against beast and was even flooded to host water battles with ships.  Some 500,00 people and over one million animals are said to have lost their lives during these battles. 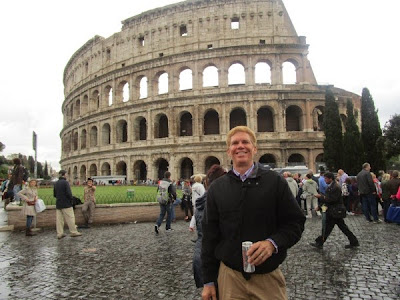 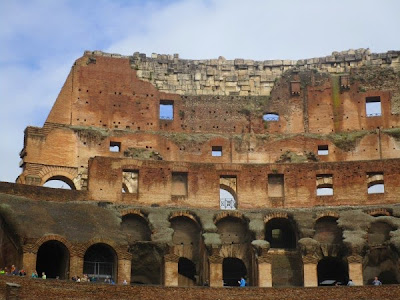 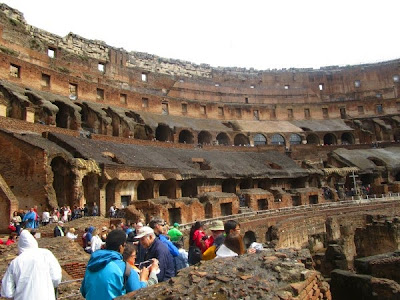 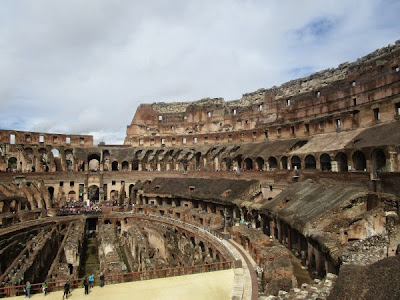 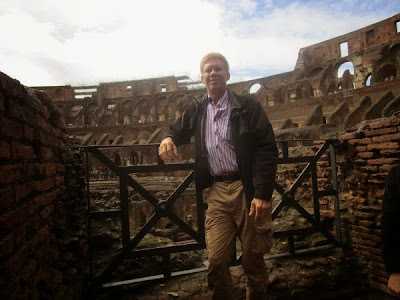 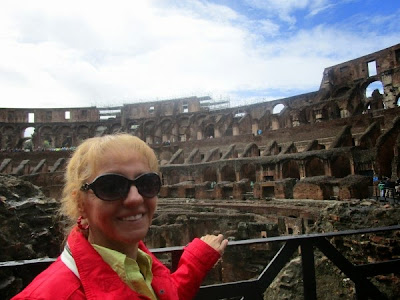 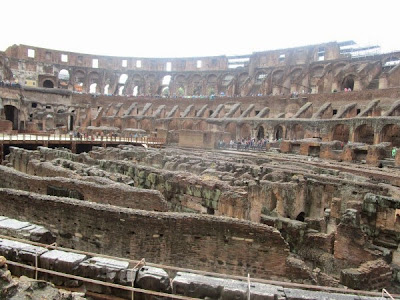 It Goes Way Down....Back In Ancient Times There Were Trap Doors That
Lifted The Wild Animals Up and Down Away From The Spectators 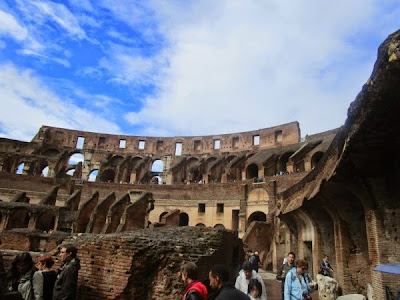 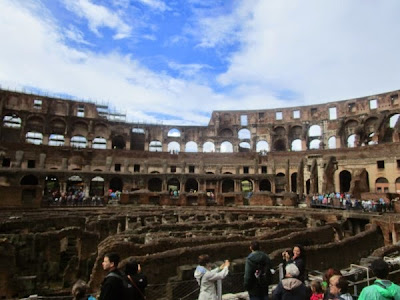 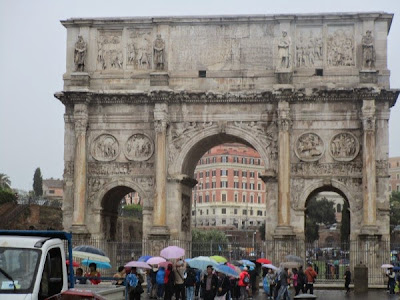 With over 80 entrances it can accommodate between 50,000 to 80,000 spectators.  The building of the colosseum took only six years using 60,000 Jewish slaves. Although it withstood many natural disasters over time, it was the earthquakes in 847 AD and 1231 AD that caused most of the damage still visible today.

The shore excursion we chose was "Rome On Your Own," which dropped us off in front of the Colosseum after a 90-minute ride from the port of Civitavecchia.   Our tour guide handed out maps and gave us specific, detailed information about getting around the Eternal City. Surprisingly we made our way to the Colosseum ticket booth which had NO line and within minutes we were inside.  With only small crowds of people we were able to make our way around the Colosseum with no problems taking lots of photos along the way. On our way out we stopped to use the restrooms and I literally stood in line longer at the ladies room than we did to buy tickets into this place. 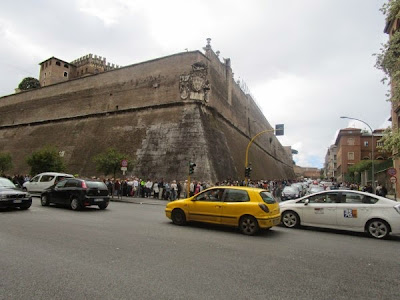 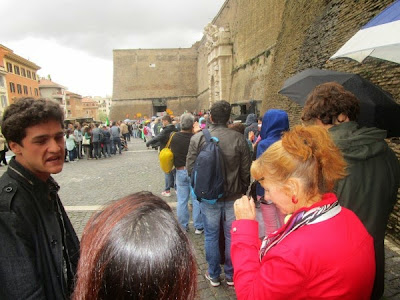 Joining Our Tour On The Security Line For The Vatican 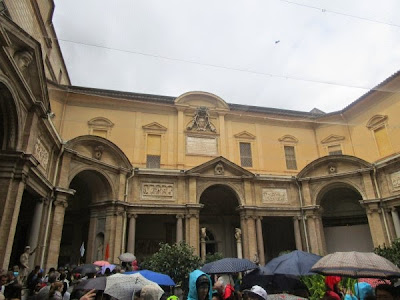 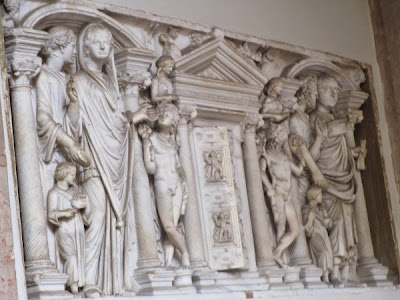 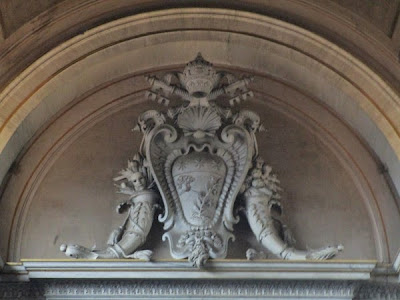 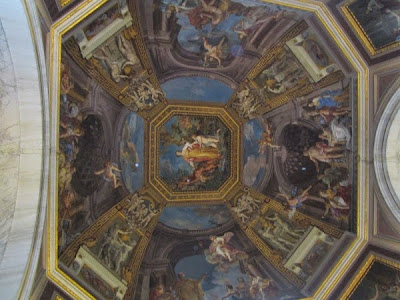 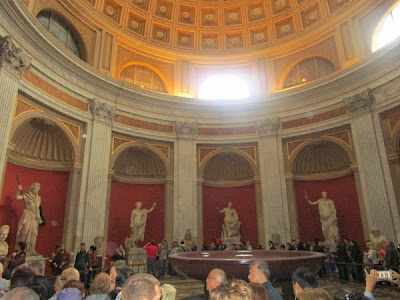 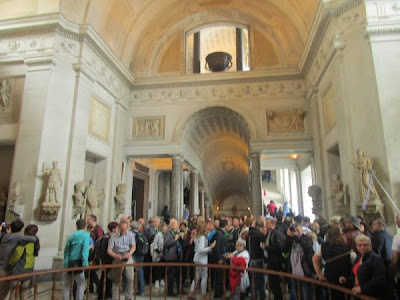 During the months prior to this trip while doing research, we had to ask ourselves the question, "do we want to see the Sistine Chapel and Vatican or not?"  Talking to those that had gone before us all told of horrible experiences of massive crowds, lines, screaming guards and limited time in the Sistine Chapel. So while we both leaned on the side of saying "no" to Vatican City there was that little voice in the back of my head. The voice that said, "if you never get to Rome again can you live with yourself having never seen the famous Sistine Chapel?"  So we, or should I say that I decided seeing the Sistine was a must. 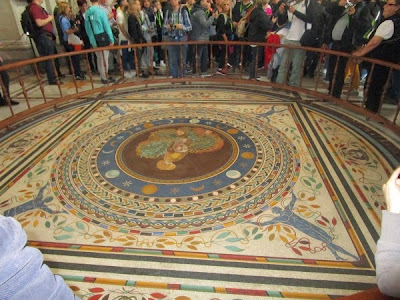 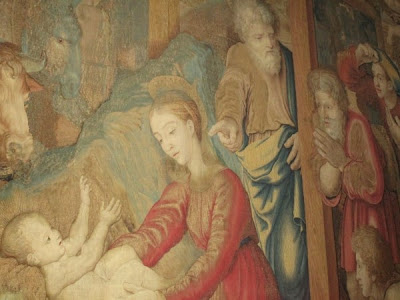 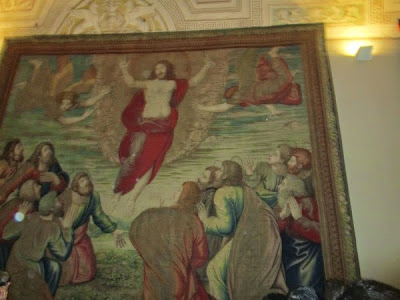 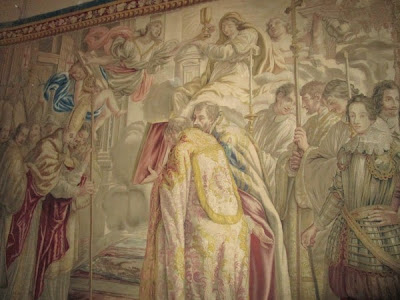 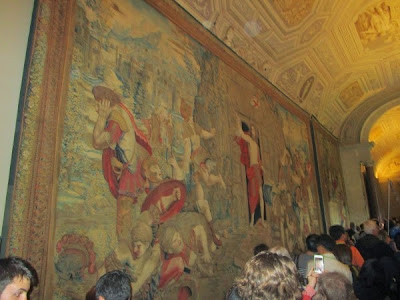 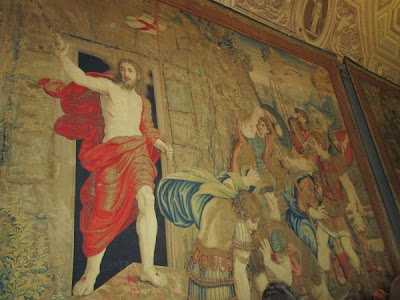 We purchased the tickets to the Vatican online for around 50 euros months before our trip with a time slot of 1pm but would need to find our way there. It was easy to find a Metro entrance but of course the ticket machines were in Italian. Friendly Clyde quickly found a cute, Italian girl that spoke English to help him out and made the purchase for us. The ride from the Colosseum stop to Vatican City was fast and soon we were exiting the train.  At first we were unsure as to which way to go but the line of people trying to sell Vatican tickets assured us that we were headed in the right direction.

Just as we could see the Vatican in front of us up a long hill one of the many tour mongers stopped us to chat. He was a friendly chap from London who's nametag indicated that he actually worked for the Vatican and not an independent tour company. We showed him that we already had tickets and he said, "that's great and pointed out the line saying it would take us 5 or 6 hours to get inside."  Then came the sales pitch when he said, "BUT I have a tour that's going RIGHT NOW that I can put you on and you'll get right in."  "Really?" I asked.  "You have a tour going right now?"  "Yes, right now," he said for only 30 euros. "Great, " I said....just "30 euros for the two of us?"  To which he answered, "oh no, 30 euros each."  I tired to negotiate the price down to no avail but with such limited time in the city a tour was the way to go.  We followed the man back to the little office where we paid our fees and a cute, young tour guide escorted us up the hill to meet up with the tour and the other tour guide.

As the first tour guide introduced to the other we took our place on the long security line and were told not to worry as it would go quickly. As it started to rain I made friends with a tall, Aussie man standing nearby with a large umbrella. His wife didn't seem to be bothered by the rain and was outside of the covered area. Clyde eventually opened up an umbrella but it was hard to maneuver too many in the crowd of people.

Once inside the security lines did go fast as our guide Seth told us exactly what to do and when. After that he handed out headsets and radio transmitters so we could hear what he was saying yet not be on top of each other.  His instruction was clear as he explained we'd be crammed in with crowds throughout the whole tour and needed to move as a group becoming ONE.

As the story goes in 1508 the artist community of Rome felt threatened by the talents of the young Michelangelo's rise to fame.  So they came up with a plan to discredit him by convincing  Pope Julius II to have Michelangelo paint the ceiling of the Vatican's Sistine Chapel. They felt surely this young sculptor who had never before attempted a fresco would surely fail. At the very least it would keep him busy for many years taking him out of the competition among artists.

Michelangelo at first refused claiming that he was a sculptor and not a painter but the Pope insisted and eventually he agreed.  But the arduous project involved long hours lying on his back on top of a scaffold just inches from the ceiling.  After four years of non-stop work Michelangelo revealed his masterpiece which shocked the naysayers of the Roman world.

Since it's necessary to walk through the Vatican museum PRIOR to entering the Sistine Chapel we followed Seth.  Our group shuffled through some of the 1400 rooms housed with paintings, sculptures, tapestries and more, each seemingly more crowded than the last.  For over two hours we shuffled through hoards of people, so close we could smell their sweat and unwashed clothes. While the artwork along the way was breathtaking the experience surely wasn't. And then finally we were inside the small chapel that was almost anti-climactic compared to what we'd already seen.

Despite our independence we both feel that taking a guided tour was the way to go.  Once inside the Vatican crowds and security guards are everywhere and surely we would have been lost.  Also we never would have heard about the feud between Michelangelo and Raphael or any of the other information presented by our knowledgeable guide.

All Ceiling Photos Were Borrowed From The Internet.....We Were
Strictly Forbidden To Take Photos Inside The Sistine Chapel 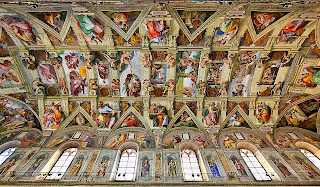 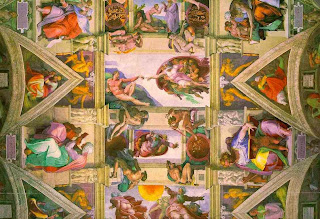 As I looked around the chapel I thought, "it's smaller than I'd expected," but then I looked up and realized, "WOW."  This was another one of those moments of disbelief as I realized I was here, standing in the Sistine Chapel looking at one of the greatest masterpieces of all time. The images on the ceiling appeared life-like, almost like real people were hanging above me it was so realistic looking.  We were surrounded by security guards constantly telling the tourists to be quiet and making sure no one so much as touched their camera.  Taking pictures or even talking in this room was strictly forbidden and enforced by the overly serious guards. Prior to entering the chapel Seth warned us and said each tourist is given about 10 minutes before being hurried along to the exit.

By the time we made our way out through the crowds after 2-3 hours I was tired, thirsty, hungry and had to pee.  But time was not on our side as we had about one hour to make our way back to the Colosseum before meeting our bus.  Quickly we found a Metro entrance and took the train back, a rather easy task.  I noticed a "WC" sign which in Europe stands for "water closet" or public toilet and headed that way. The coin operated bathroom had a charge of 50 cents and was just one, large room so Clyde and I both went inside at the same time. I used the toilet while he used what looked like a urinal but we later realized that it was the sink.

On our way out of the Metro station I spotted a hotdog vendor so we bought one hotdog to share along with a drink.  After a drink and a few bites of food we were ready to go again.  Right outside was the Colosseum and the Roman Forum.  With little time left we could only take pictures from outside as we didn't have time to go inside the Roman Forum.  Much of the outside seemed to be under construction also and wasn't too pretty to look at.  But we snapped a few photos while waiting for the bus ending our day in Rome. 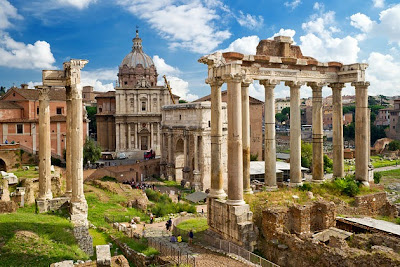 Next time Roman Forum,
Not enough time to see you on this trip!
﻿

They say that Rome wasn't buildt in a day and we certainly couldn't see it all in a day but had expected to see more than we did. But that just gives us reason to return again someday on our next trip to Europe.....along the gringo trail.