Our 5th Christmas On The Isthmus.......A Good Day In Panama

This year we decided to do something different for Christmas so we booked a fancy hotel in Panama City to enjoy a mini getaway.  While my first thought was to stay along the Cinta Costera, a road that runs along the waterfront, a good place for viewing the midnight fireworks but that didn't work out. With just a few ritzy hotels along that strip they tend to be pricey, ranging close to $200 and  that didn't even include free internet.  So we went for a more mid priced but very upscale hotel a bit more inland.

Before leaving home I was working online and decided to reboot, since things seemed to be moving slow.  To my surprise my laptop didn't come back on and apparently had taken it's last reboot, never to start up again.  But since the thing was only four months young and still under warranty we thought we'd drop it off at the service center where we bought it in Panama City, since we were going there anyway.

We made it to the computer service center around 2:15 pm and since this was Christmas Eve things were closing early and we had just missed out.  So we headed over to the hotel to enjoy our mini getaway in style. 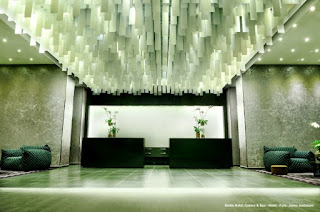 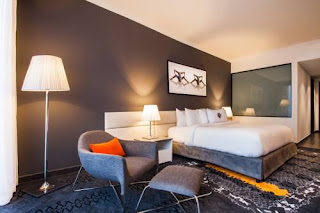 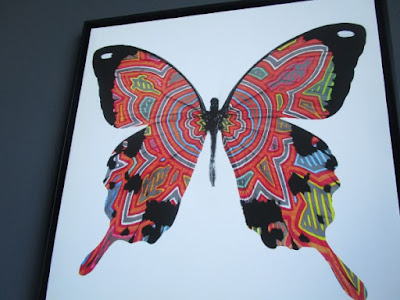 Picture On The Wall
﻿

The Sortis Hotel, Spa and Casino features its autograph collection of shops, large outdoor pool, equally large casino, restaurants, a fitness center and more.  Very much geared toward tourists some of the staff spoke English and all of the signs were printed in both Spanish and English too.  Our room was spacious with a wall of storage cabinets, mini bar, fridge, coffee maker (not commonly found in hotels here in Panama) and large screen tv.  The bathroom was huge and featured a large glassed in shower big enough for a group shower which included a long bench for lazy cleaning up maybe?

After settling in and relaxing a while we headed out to the pool that featured lovely beds in the water for lounging. I just had to go lay out on one while Clyde snapped a few pictures.  From there we made our way to a double lounger for some poolside cocktails that we made ourselves. Even though the temperature outside was hot and humid the pool water felt cool and we didn't stay in for too long. 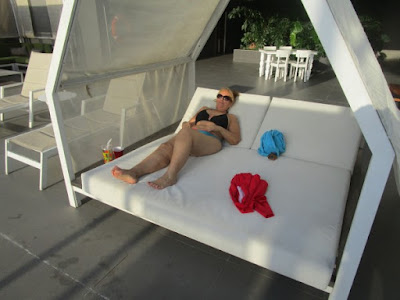 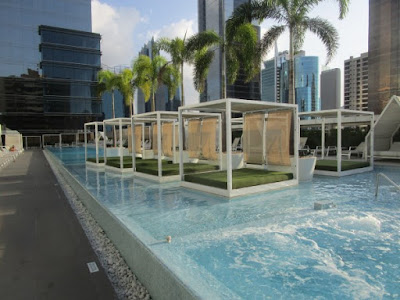 Jacuzzi And Beds In The Pool Nearby 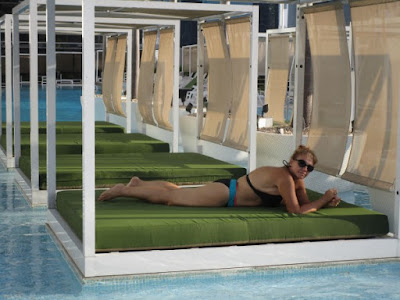 I Had To Try One Out

Since this was Christmas Eve and the city was rather quiet we expected that many restaurants would be closed for the holiday.  So we opted to dine at the hotel in one of it's exclusive restaurants where Clyde enjoyed a tuna steak and I had a veggie burger. 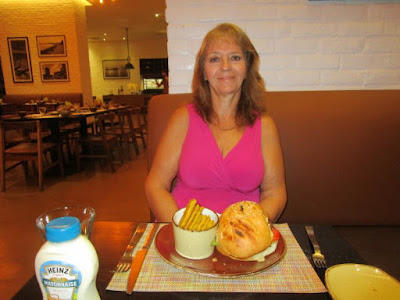 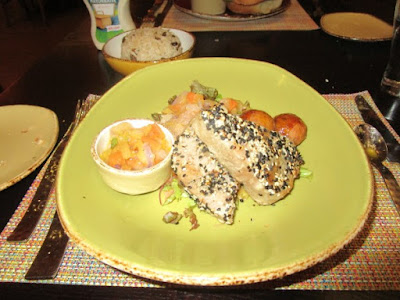 Tuna Steak With Veggies And Rice With Guandu Beans
﻿

After dinner we passed some time in the casino playing the slot machines and managed to walk away with a small win, making the night a success.  Here in Panama the locals spend Christmas Eve with family then go to church before opening presents later that night.  The typical midnight fireworks began to light up the city and we watched what we could from our large hotel room windows. 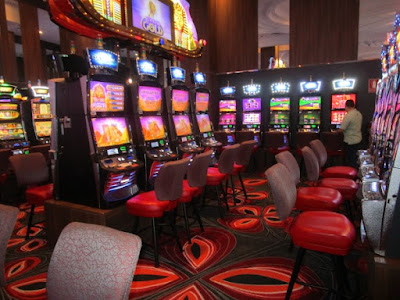 The Casino Inside Hotel
﻿

The next morning we enjoyed a free breakfast buffet at the hotel, probably one of the best we'd seen in a while.  It featured everything from eggs, cereals, breads and pastries, fruits and veggies, yogurts, meats, juices and more.  We checked out of the room around noonish and toured the city a bit before heading home.

The day after Christmas we headed back into Panama City to drop off my computer at the service center.  Thinking back we really should have spent another night in the city to avoid the drive back, but we did have to get back to feed the dogs.  We made out way to the service center and Clyde explained our problem to the clerk who told us how they would resolve our issue.  My Asus laptop would need to be shipped back to the US to be repaired or replaced, whichever was more economical for them.  It would take at least six weeks to be returned to Panama and since nothing happens in a timely manner here we're expecting that six weeks to be a conservative number. So now I'm thinking, "great......so I have no laptop for next two months or more.....I only have my little tablet to work on?"  Sensing my frustration my loving husband said," let's go back into the computer place and buy you another laptop." So we headed out for some lunch first and then went back to see what they had.  Since the busiest season of the year had just passed they didn't have much and we decided to go elsewhere.

Down the road we stopped into a store called Multi Max, a chain store here that sells electronics.  Quickly we picked out a new laptop and proceeded to the register to pay for it.  As typical here in Panama from the register everyone proceeds to another area where the item is taken out of the box and checked.  The clerk then turns it on to assure the customer that it works and is leaving the store in that manner.  This is done because usually it's almost impossible to return anything here.  As the clerk was turning off the computer we thought to ask him IF the language could be changed and explained that we needed it to be in English. He said that yes it could be easily changed.....not a problem and we took the package and left the store.

We made the 90-minute drive home again and Clyde proceeded to hook up the laptop for me and install all of the necessary programs that I needed.  At one point I heard him exclaim, "oh F#*).....and asked him what was wrong? He explained that while the language was changed to English he could not change the language of the operating system.....so Windows 8 would still be in Spanish.  And since the operating system was in Spanish so was the keyboard.  He changed the keyboard to English for me but then half of the symbols didn't work.  Also whenever I typed something spellcheck was underlining every word since it wasn't recognized in Spanish.  Yikes.....what a mess.....I was upset and said, "I'm not using that thing.....you use it or let's take it back."

So the next morning we decided to drive to a closer Multi Max in Westland Mall, about 45 minutes from our house.  In we went expecting to have to argue our point and fight with management IF they didn't agree to take it back.  We spoke to a gentleman dressed nicely and assumed that he was management.  He assured us that they could issue us credit and we could buy a different laptop with an English operating system.  So while Clyde was waiting for three different clerks to take care of him I went to look at laptops.  Nearby was a clerk who I started chatting with in Spanish asking if they had anything in English?  He pointed out one then went to look on his store computer to see if there were any other types.  In the meantime I noticed an 11 inch Acer Aspire in bright pink.......just what I was hoping for.  With our pending travel plans a 15 inch laptop is heavy to carry in my backpack and I was actually thinking I'd like to have a smaller one.   Eventually the clerk explained that he didn't have the one I wanted in stock.......just the display model.  I asked if they would sell they display and he said, "si," and even knocked down the price.  He did manage to find the original box and paperwork to give us so we really aren't missing anything.  While it does have a full sized keyboard I'm still getting used to typing on it. 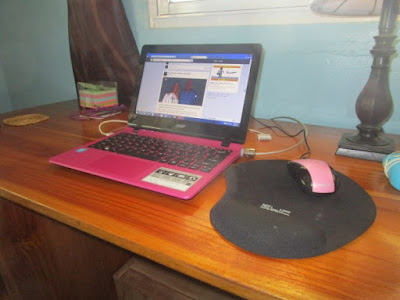 
We returned home absolutely thrilled that we were able to return the unwanted laptop, came out with just what we wanted, and realized it was a good day in Panama.......along the gringo trail.